After a fruitless month of trying various fixes for uploads to Google Blogger,  I’ve concluded that there isn’t a way forward with the platform.

Unfortunately, its not the first time that the majors have stepped back from supporting products that I rely on.  But I’ve also learned from experience.  The best thing is to take the steps necessary to migrate to new services, ones with fewer bugs and better capability. In the end, I want a platform that best serves my audience and supports my authoring...

So, I’ve begun the transition, registering a domain and engaging a support consultant.  We’ll likely move the entire blog to a new platform in early July, with a new style template and, perhaps, additional personal pages.  From your perspective it should be seamless: no content will be lost and the addresses won’t change.

My professional site, Stone Bridge Biomedical, should also re-launch at the same time.  While my two domains won’t be tightly joined, they will be more consistent and professional.

In the meantime, I remain active on Instagram, can be reached by email, and am always available for a ramble along the beach or a biertje by the river.  Thanks again for reading, and for bearing with me during the migration.

Sorting out the issues

There have been fewer blog posts of late because of numerous technical problems with too little time available to sort them.  Open Live Writer has only been able to publish intermittently because of an Error 500 associated with posting pictures.  Blogger stores photos in dedicated albums in Google Photos, and the interface is, at best, inconsistent.

The project team at Github has suggested workarounds, but I’ve had mixed success in getting them running.  Test posts have, therefore, been popping up occasionally while I run potential fixes: I’m sorry for the spam and will hopefully get things to settle down shortly.

The camera also needed to go into the shop for another lens.  This is the third time that the camera has stopped recognising its own E-mount glass, its never in the body, but always in the lens recognition system.  I have replacement insurance with John Lewis, fortunately, but it leaves me without good photo support until the system comes back.  Hopefully it will be resolved next week.

Finally, I updated the blog theme last week, slightly: Blogger has been changing its templates and a consultant suggested that uploads might start working if my migrated off of my 5-year-old standard.  The blog and photos migrated fine, but I’ll likely make more aesthetic adjustments in the coming month.

However, I’m still around and doing fine.  There’s lots to share once things get sorted, and as the workload eases up in the Netherlands and UK.

Morning dawned misty and cool along the Amber Valley, a former mining district just southeast of the Peak District.  Evening at the Farm Hotel had passed with comfortable ease, from drinks with the owner of a pub Saturday night to a decent buffet breakfast to start our Sunday. 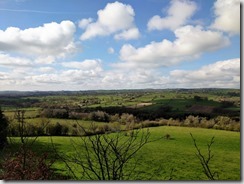 Flicking though the local outdoor guides, the nearby Dovedale Walk looked appealing: One of the most beautiful limestone dales in Britain, a variety of scenery with the ever-changing River Dove, the steep limestone cliffs and spires, the rare woodlands species and its many caves.  The trailhead was in the nearby village of Ilam, near a rolling park, a stately home, and a looping bend of the Manifold River. 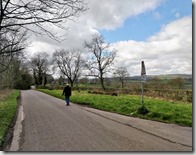 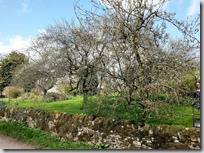 Given that it was a nice spring weekend, though, families were out in force by 10 am and the narrow roads into the village clogged with traffic.  We dropped anchor near the trailhead and walked the rest of the way in, along the tidy homes and past the stone church to Ilam Hall, a once-fashionable mansion converted to youth-hostel by the National Trust.  ‘tea and a beer, then off into the hills. 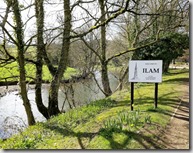 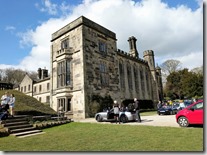 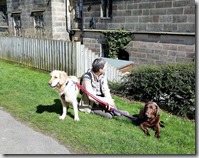 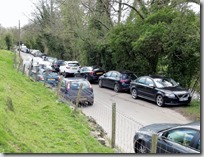 It’s lambing time in the northern meadows, sheep all across the trail the wound up above the roads and traffic.  There was a steady line of walkers, some with dogs and sticks, others lifting children over the stiles, all sloshing along the muddy slopes.  It made (my) balance tricky, but  the rocky upslope alternate path was longer and steeper, so we stayed to the pastures and took things easy. 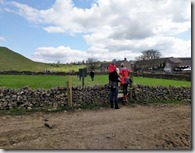 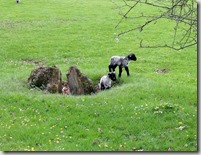 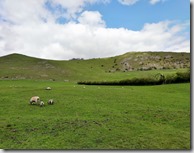 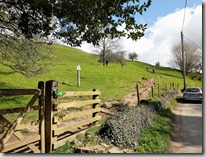 The Dovedale Valley is about a mile onward, a frothing  river flowing through steep-sided limestone canyons.  The first attraction is the Stepping Stones, a sequence of flat rocks providing a well-known river crossing.  There’s a bit of a queue to wait, but the rocks themselves, flat-topped and each about a foot apart, don’t seem to be much of an obstacle. 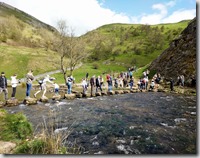 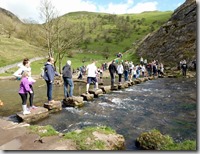 Or so I thought.  Crossing the first three, they were a bit more rough, muddy, slippery, and tipped than I’d realised.  My ankle is similarly rough, wobbly, and tipped, and there was no easy way to go forward or back.

Stuck, I beckoned my w.wezen back for an assist (who thought I only wanted to take a picture). With a steady hand to hold, the crossing was done, eliciting  embarrassing applause from the group queued on the other bank.  Age and hesitation, but falling into the water would have been worse. 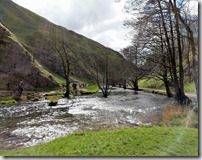 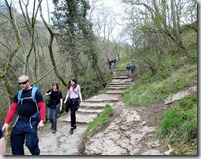 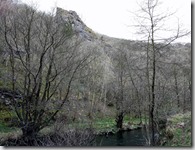 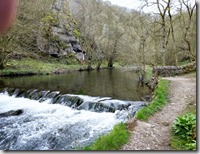 Onwards, up the valley through rock formations, weirs, and little named settings (Lovers Leap).  The whole three miles up to Milldale was more than we had time for, but it was nice to get back up into the hills and alongside the streams. 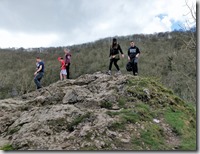 The further ridges and peaks were drawing venturesome teens and booted hikers, and it would be fun to scale for the views some other time.

Posted by Dave Hampton at 6:07 PM No comments: Links to this post