Bits and bobs before the sun rises

I'm up early this morning; it's only about 3:30 here in the room outside Minneapolis.  Normally I take a couple of Melatonin tabs a half hour before bed and it helps me to sleep through the first couple of nights.  Unfortunately, I didn't pack it along this time, so I'm going to have to rotate things more slowly this trip.

Nonetheless, it's quiet outside (the thunderstorms pass through around sunset) and, with hours until the day's interviews, I'll catch up on a few coming-to-America thoughts for mid-week. 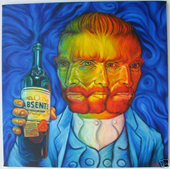 A friend asked if I could bring back a small bottle of Absinthe, the one with the little spoon.  The local Gall & Gall had a cute package with van Gogh on the outside for 11 euro, and I tucked it into a corner of my suitcase without much thought.

I named it on my declaration card, and was rewarded with dripping red scrawl from the inspector and a quick trip to the agricultural desk.  They gave me a copy of the Know Before You Go booklet "The importtion of absinthe and any other liquors that contain artemista absinthium is prohibited" and confiscated the bottle.  We spent a half hour filling out confiscation and surrender of goods forms, the agent reassuring me that I would not face fines or court appearances this time.

I'm noticing that procedures at the US border continue to evolve: TSA and Homeland Security must still be fine-tuning existing procedures and adding new ones.  Yesterday, they announced that they would no longer track people who failed to have proper ID at checkpoints, instead limiting entries to people without ID who then give a false name to screeners.  I've noticed that we have to thread a phalanx of agents along the corridor ahead of passport control now: they seem to stop about 10% of people for a conversation and inspection of documents.  Patrols around baggage claim have also been stepped up, and people texting or talking on cell phones are getting questions.

A new declarations program is going into effect: the Electronic System for Travel Authorization (ESTA).  This system replaces the current paper declaration forms with an on-line pre-declaration, and becomes mandatory at the first of next year.  You can fill in the forms voluntarily now at their web site, and approved registrations are good for two years.  There is no cost: a friend tried to find the site and ended up somewhere else, being asked for payment for processing.

The interviews are going well: I take these as opportunities to understand where I can contribute and to connect across the table, rather than as pitches and challenges.  In that spirit, they've been enjoyable.

After yesterday's round, I went to the local health club to unwind on a bike, and was stuck by how noisy it was in comparison to Dutch clubs.  There is lots more calling across the room and talking between bikes, and a bank of TV monitors, all tuned to different channels, chattering under it all.

This seems to hold more generally: the hotel has background music and the television on all the time; the shopping centers all have ambient music.  Restaurants pipe mood music into the inside and outside (terrace) areas.

Why?  It's not common in Europe: is it done here to promote comfort, to relieve loneliness, to promote sales?

Suburban Minneapolis is a land of enormously broad streets and widely spaced detached businesses.  This makes for vast distances between doorways when I go shopping for the essentials that I can't get in the Netherlands. It's just not possible to walk from store to store: each must be a separate driving destination, increasing the time, cost, and hassle of running errands.

Like Las Vegas casinos, I suppose that merchants benefit when its hard for shoppers to go from one store to another.  Once it becomes more of a hassle to drive down the road to see more of the same, rather than to settle for what the current store offers, then a sale is made.

I think that this is what led to the evolution of one-stop centers like WalMart and Target, and their cousins the strip malls: essentially multiple shops gathered into departments under one roof. They become more attractive destinations as they enclose more departments, so Target begets SuperTarget: oversized and out of scale with surrounding homes. It forces retail and residential areas to become clustered and segregated, further increasing dependence on the car and the necessity for roads and parking.  It's a viscous cycle.

Yesterday's Yngling races (pix from sailing.org) were postponed due to lack of wind and visibility, but will resume Friday.  The standings: The Dutch Yngling women's team is still in second, equally behind the British and ahead of the United States.  '

Finally, a quick refresher on the Olympic boat classes:

Okay, sun's up...back to the street and on to the next interview...

Dear dear you don't seem to have much luck in getting alcohol back into the USA.

*laugh* First my daughter, then me. I'm just hoping that I don't end up on some watch list and checked every time in.