The snow has largely melted off of the cobbled streets of my new neighborhood; the sun was out as the city was waking.

The river makes a nice backdrop for the people and the buildings, I think I’m going to like having it nearby. When I first came to Arnhem, I had negotiated for an apartment at the Rijnkade, but ended up at Sonsbeek instead. This feels like a “do-over” in that regard.

My neighborhood, the Wyck (pronounced like ‘bike’) lies directly along the Maas river, across from the old city center. It’s filled with shops and restaurants, bustling with pedestrians and bicyclists, and charming in its close Dutch village architecture. It’s made even better by the Christmas lights that have been hung along the streets and the soft orange glow of clocks from the many churchtowers. 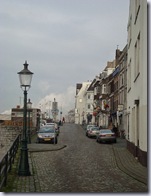 The apartment closing went well: the agent walks through long checklists detailing every furnishing and the condition of every element: there are pages of inventory and comments to agree to. There was a quick orientation for the procedures for unlocking the doors (Green key, followed by blue, on exiting; red key, followed by green on entry) and for disposing of garbage (a whole new mystery, beginning with “Go to the Albert Heijn and get Red Bags…”)

I’ll get it right, eventually…but in the meantime, it’s lovely to enjoy the new view of the old town across the river.

This is interesting! Thanks for sharing :-) Sounds like things are falling nicely into place!

I'm feeling much better, thanks. And it was the right thing to do to move to the city rather than to the villages, thanks for helping me weigh the balance by sharing your experiences.