Being -18 F in Minnesota

On the road for work, then onward for the holidays.  Even though it’s a mere week before Christmas, it feels easier this year.  I arrived with cards addressed (on the plane) and gifts purchased (Christmas Markets and de Bijenkorf store), and spent a focused hour with Kinko’s this morning to get things shipped.  There’s still the decorating and baking in Woodinville, but there’s a week to get all of that sorted.  ‘life is good.

The weather, unfortunately, is not. 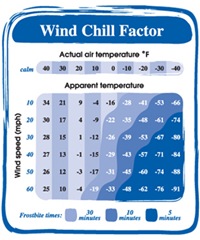 Minneapolis is in the grip of a cold nap, accompanied by light snow.  Temperatures around the clock have varied between minus 18 F and minus 2 F (-28 C to –19 C).  The light snow makes for slippery conditions everywhere, from walkways to roads.  It’s just bitter.  ‘not much wind, thank goodness, even a little wind could really accentuate the effects of the cold (right).

I grew up in the Midwest, but we used to say that unless you experienced the onset of winter, your “blood didn’t thicken”, and you felt the cold more intensely.  This week, it feels like there’s some truth to that.

Fortunately, people here are used to the conditions and drive pretty sanely.  There are the occasional stalls and spinouts, but people are driving slowly, carefully, and respectfully.  The plows are out everywhere, salting as well, which helps on the highways.  Still, I’m doubling the likely time to get anywhere and leave early.

I had to pick up some pants that had been taken in down at the Mall of America last night, but found myself having to make the trip through driving snow at rush hour across the city.  The half-hour trip took an hour and a half: I didn’t even see the skyscrapers as I went through. 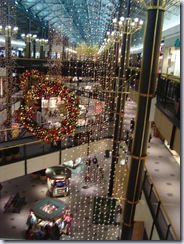 The Mall was deserted, really surprising for the week before Christmas.  Everything was open late and expectant shopkeepers hovered near the doorways, but there were few customers.  ‘Lots of sales on, 20% in the stalls along the walkways; 50% and more at the clothes stores.  Prices didn’t seem especially cheap, I usually feel like I notice a big difference between Europe and the US, especially on electronics.  That differential seems to have almost  disappeared; only the plunging price of gasoline stands in contrast to what I’m used to.

Email ThisBlogThis!Share to TwitterShare to FacebookShare to Pinterest
Labels: Idle chit-chat, US Perspectives