Bits and bobs on Friday

Still sorting a bit today: leaving for the US on Sunday, so lots to be done at work and home, for settling in and for Christmas.  I’m also still wrestling with the conflict inherent in the travel issues I wrote about yesterday: I love the travel - I hate the consequences.  I think that it’s something that many expatriates, trying to make the most of their time abroad, have to come to terms with.

There wasn’t time for a lot of decorating for the holidays, given moving and travel.  I did find an orange paper star, lit with the glow of a 25-watt bulb, at the Koln Market that gives the place some nice festive sprit. 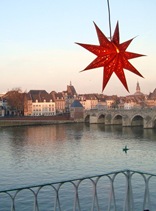 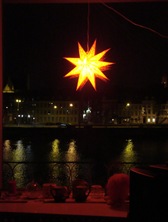 ‘Still no Internet at home.  I signed up for KPN’s service, and they promised to have it delivered within a month of my order.  The order went in at the start of November, and KPN installed ADSL service a month later.  The problem is, they weren’t sure about which apartment, so they randomly connected to one of the four in the building.  I’ve called to try to get it fixed, but now I’m on a different wheel: they made good on their delivery guarantee (irrespective of whether I received it), so now I’m on the Service clock.  Within five (working) days, I will receive a phone call telling me how they might fix the connection issue.  To actually get it fixed, delivering working Internet, may take much longer.

Perhaps by New Year’s, the apartment will be connected.  At that point, I am encouraged to use the Complaint procedure to recover the money that I spent in December for Internet service that I didn’t receive….

I’m not making this up.  In the meantime, I’m sniffing off of a random connection in an adjacent building.  There are a half-dozen strong access points in range, but security groups have encouraged everyone to lock down, so none are shareable.  It probably has greater effect of making everyone pay than it does for protecting everyone.  I’m seriously considering throwing my access point open, when, if, I get it, really.

It’s nice to be back along the river.  There are an amazing variety of boats that go by over the course of an hour, from heavy freighters to little tugs and tourist boats. The big ones are partly residences, with compact cars stored on deck and cheerful curtains at the cabin windows, flags waving on the stern. Many seem to be family operations: children’s play sets, encased in chicken-wire cages, adorn the decks.

I’d always considered retiring to the San Juan Islands, north of Seattle, with a view from a bluff over the Sound.  I do enjoy the shimmer and mist, the changing character of having a  waterway in sight.  It will have to be part of the future.

I’ve become a fan of the Financial Times weekend edition and their collection of columnists and features.  My guilty pleasure is Tyler Brule, a globe-trotting magazine editor who writes their Fast Lane essay.  I got sucked in when he described his 20-point Perfect Day  (#1: A morning without Sarah Palin), the Perfect man-bag (I hate to admit it but do accessorize), and OilyBoy (the perfect “commonsense guide to looking and acting your age”).

‘lets face it: my taste runs to the Economist, Wired, and the Sunday Times Travel. My life has never even admitted the possibilities that Tyler cooks up each week, not so much aspirational as they are weirdly alternative.