I’ve arrived back in Seattle for the holidays: the cold weather in Minneapolis was a prelude to deep snow and cold greeting me in the Pacific Northwest. Like the Netherlands, Seattle has a maritime climate that rarely get’s snow. When a small amount does come down, usually briefly, it brings life to a hard stop.

Today it’s snowing much harder than that: six inches fell in the suburbs where I live, for example. The roads quickly blocked with spinout cars and stranded buses. The shuttle services from the airport advised that half-hour trips would take hours, at best. I huddled under blankets in the departure garage with everyone else, watching the road reports go from red to black on the traffic maps. 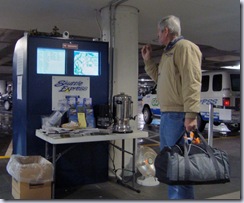 When we finally did get out, the snow was dense. Buses had jack-knifed on hills and cars were abandoned along the roadsides. The driver stayed creative with the GPS and aggressive on the hills and got us north by early afternoon.

Settling into the last of the holiday preparations now: my daughter still has to get in from Spokane (18 inches of snow today) so I need to get the studded tires on. Lots of notes from travels to catch up on in the coming days too: the early morning quiet will hopefully provide time for essays beyond the weather reports…