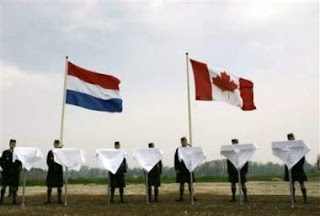 My native country is the US, born outside Cleveland, raised in a suburb of Chicago, schooled in Tennessee, and lived with my own family near Seattle. While I've traveled internationally a lot, I've only spent the majority of my time outside the US during the past three years, first in England, then in the Netherlands. Currently, I'm a US citizen/ Dutch resident (happy with both: hence my delight at the "Welcome Home" greeting that Dutch immigration gives me now).

On the road, though, I try to keep a low profile with regard to sporting any nationality. In line with safety guidance, I avoid logo shirts or symbols that might suggest any particular origin: I don't generally volunteer where I'm from, or where I'm going. If someone in Europe asks, I'm pretty open: either "From Seattle" (a nice, distant, liberal spot that few people are even sure lies within the continental US) or "Living in the Netherlands" (a nice, local, liberal spot that certainly lies beyond any US influence).

Sometimes though, as in the bazaars in Istanbul, the "From Seattle" answer simply raises eyebrows (and prices) when they recognize that I'm an American. So, when in doubt or uncomfortable, I've always adopted the easy subterfuge that I was from Canada (a nice, distant, easy-going spot that everyone seems to like). I've been to Vancouver enough to carry a conversation, and the accents are generally indistinguishable (throw in a 'eh now and again, and you're there...)

But, most recently in Jerusalem, when I said I was "from the Netherlands", I noticed that I got an even better response than when I feigned a Canadian accent. The merchants immediately seemed to adapt a less aggressive approach (or moved on to the next victim entirely), in contrast to a couple of shops where I offered up Seattle. A couple of merchants tossed me a few lines in Dutch, but, since mine was (incredibly) better than theirs, the illusion held. My Dutch driver's license and bank card sealed the deal.

I'm always struck by how people react differently to others based on their origin: my observation is that the Dutch do enjoy a good international reputation when they travel abroad. Hopefully, the US can regain a similar perception some day. Meanwhile, I only play this card in anonymous, harmless situations where I'm avoiding a hassle, but 'going Dutch' is clearly better than being Canadian.

Now if I could just add a few inches and regain my hair color...

Flowing into the weekend

'been a long week: lots of tension, lots of progress, lots of uncertainty. The temperature is up to a hopeful 10 C, though, and the weekend is at hand. My daughter arrives on Thursday for ten days: I'm really looking forward to her visit and to sharing some time together. 'funny how much family time seems to matter right now.

I watched the Geert Wilders' film: I was underwhelmed. So many of the images are familiar stock footage or provocative stereotypes, and were so closely coupled to terrorists in particular. As such, it didn't carry the emotional power against Islam that he probably intended. Instead, I found it a sad and angering testimony against those who hate an institution but strike out, instead, at innocents.

On a weary Friday night, instead, I turn to personal pleasures that are creative and immersive.

I'm always one who carries a hip-pocket time-filler with me when I travel: a book, art supplies, an iPod. If there is empty time, I've always been able to settle into a quiet corner and sink into the activity, happily oblivious to the delays and turmoil (or ennui) around me. I was reading an article on Flow States the other day: Wikipedia defines them as periods of heightened concentration and creativity, characterized by:

1. Clear goals (expectations and rules are discernible and goals are attainable and align appropriately with one's skill set and abilities).
2. Concentrating and focusing, a high degree of concentration on a limited field of attention (a person engaged in the activity will have the opportunity to focus and to delve deeply into it).
3. A loss of the feeling of self-consciousness, the merging of action and awareness.
4. Distorted sense of time, one's subjective experience of time is altered.
5. Direct and immediate feedback (successes and failures in the course of the activity are apparent, so that behavior can be adjusted as needed).
6. Balance between ability level and challenge (the activity is neither too easy nor too difficult).
7. A sense of personal control over the situation or activity.
8. The activity is intrinsically rewarding, so there is an effortlessness of action.
9. People become absorbed in their activity, and focus of awareness is narrowed down to the activity itself, action awareness merging.

I think that only 2,3,4,8, and 9 characterize it for me. Activities that I become absorbed in to this degree include reading, programming, life drawing, exercise, baseball games. Life drawing, in particular, became a very intense point of awareness between the paper and the subject,

translating small details into a proportionate whole through the charcoal. I would sketch, adjust, look, correct, squint, shade, over and over, and three hours would pass like a blink. The intensity of the experience always surprised me. Similarly when doing programming or analysis: there is a point where you hold it all in your mind and jump back and forth within the work, seeing, adding, building. Insight would flow from the work, not from contemplation about it.

These days, living alone, the experiences come less frequently: time is more broken up and attention is more distracted.
Curious that life should be more scattered when nobody is competing for a piece of it.
Posted by Dave Hampton at 8:24 PM No comments: Links to this post

"We wanted to make the experience of being in an airport exciting. We wanted to capture the spirit of travel." said Heathrow's Terminal 5 architect Richard Rogers.

It certainly looked that way to me yesterday: the baggage system malfunctioned, causing hours of delays in retrieving luggage, at least 34 canceled flights, and a temporary ban on checked items.

Too much excitement; too much the spirit of today's travel experience, I'm afraid.

I remember the opening of Denver's new airport a few years ago: it was plagued with similar problems in it's automated baggage handling system. I don't think that they ever got it right: in that case, the problem was compounded by having built the handling tunnels to be too small for human crews to substitute for the automated ones. I was on one of the last flights through the old Stapleton Airport the night before the switch in 1995, and the facility had been completely gutted to furnish the new airport. I can imagine that BA (and it's passengers) will face months of similar "settling in" glitches.

I think that we just have to accept that people are not particularly good at anticipating events, and stay flexible when hitting the road. Air travel seems particularly vulnerable, since single-point problems (weather, aircraft, baggage handling) can affect so many people and the effects can ripple throughout the system so quickly. There is no "routing around" the problem, only 'shouldering through.

It seems that transportation systems need to be designed to route around failure more quickly and automatically, much as the Internet is able to. The mechanisms aren't the same, of course, but the model is good: why aren't there better designs for routing systems for physical distribution of goods and people. Current systems seem to place too much emphasis on economy-of-scale and hub-and-spoke architechtures: perhaps more flexible routing (Open Skies?) and smaller packets (commuter airlines?) might improve performance.

Something to mull on the evening commute (stuck in traffic after an accident along the A12...another system vulnerable to disruption by point failures).

Posted by Dave Hampton at 7:33 PM No comments:

Just another spring day in paradise...

The snow squalls continued through dusk, in just about every variant. Sometimes wet and heavy, plopping onto the balcony, other times just a feathery swirl across the front window. By morning, though, the storm had blown itself through, leaving only frosted branches on the trees and highlights along the roofs. The neighbor's garden hose lay frozen alongside the flower bed, abandoned mid-cultivation. Even the bicycles have been pulled under shelter. But there were the normal number of Dutch riders on the roads this morning. The skies are clear, the sun's rising warm, and there is a noticeable difference in the scene from my office, contrasted to the grey cold a few days ago. Despite the late frost, there is definitely a sense of spring this week everywhere I look.

Posted by Dave Hampton at 8:55 AM No comments:

I decided to take a day off today and hit the relatively empty Easter roads to roam around Rotterdam. It's the sort of footloose day that I really enjoy: I packed a bit of hummus and pita, a couple of guidebooks (I like the Frommer's for the big things, and the "52 Mooie Dorpen" recommended by Dutched Pinay for the small), and raced the midday sun towards the towering storm fronts blowing in from the west.

The windmills at Kinderdijk are one of the iconic areas that I always wanted to notch, and today was a good day for it. The 19 windmills, built in the 1700's and now a UNESCO Heritage Site, are located at the edge of town, on a windy, cold marsh that reminded me of the Norfolk Broads. In winter weather, they are silhouetted sentinals, silent and ancient, ranked along the slot waterways. Partly because of the setting and partly because of their weathered age, these really carry much more gravity than the other windmills I've seen scattered around the country.

I spun through Rotterdam, but decided that I wanted to get out to the mouth of the Rotterdam Harbour at Hoek van Holland, about 20 km further west. The city ends surprisingly quickly, opening to flat pastureland, then followed by acres and acres of greenhouses at the coast. I didn't really understand the Dutch flower-growing industry on this scale, and it's impressive to see how large it really is. It must be spectacular at night when they are lit.

The beaches at Hoek van Holland ("the corner of Holland") were windswept and shuttered. The Dutch were, nonetheless, pretending it was summer, strolling the beach and flying kites. The vast shipyards of Rotterdam Harbour filled the horizon, cranes and windmills, radar and power lines. Most of the restaurants were still preparing for spring, with sand drifted over the outdoor chairs and sheets over the sunroom tables and chairs. It's the way I imagine the world will become here if the Gulf Stream ever reverses.

Indeed, I hit a blizzard on the way home along the A12: maybe it really is the coldest Easter weekend in 40 years. I do like the three day weekend, though, and coming home to a warm apartment after a cold strand. A bit of a space station, but it's going to be awesome when it's done... Posted by Dave Hampton at 12:37 AM No comments: