'Trying something different today: a bit of an exploration of media sharing.

William and I took a long video capture with my Sony Cybershot point-and-shoot camera while we drove on the scooter through the center of Rome. It's about eight minutes long, and is a bit bumpy because of the scooter's engine vibrations and the cobblestones. The audio is live, but mostly wind noises and the occasional bit of back-seat driving directions.

Frankly, I was hanging on tight with knees and one hand, holding the camera over William's shoulder with the other, so there isn't much creativity involved: we just wanted to see how it would come out.

The route starts near the Coliseum along the Via del Fori Imperiali that parallels the Roman Forum, then around the Vittoriano museum, and into Vittorio Emanuele street, headed west. Eventually, we cross the Tiber and into the v.della Conciliazione street, the main way into the Vatican, where we end.

Technically, it's raw footage except for adding a title with MovieMaker 2.1, and saving it in a .WMV format which decreased the size by 2/3. I experimented with saving in different formats using Replay Converter, but most seemed to really degrade the picture quality. The upload to YouTube and embed using Windows Live Writer was pretty straightforward, just following the prompts. In the future, I'd probably fiddle with getting the audio and stability better, and with some geotagging prior to uploading.

Start to end, it's a first try, so don't expect much, but it hopefully works and gives some idea of this means of travel.

Posted by Dave Hampton at 4:29 PM No comments: Links to this post 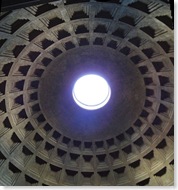 <Sigh>  'really in a mood to write a bit on what's been happening at work the past month since the transfer and layoff was announced, but things are still up in the air.  Negotiations are ongoing regarding advice, settlements, and pensions, and it needs to conclude without my two cents here.  I have opinions, though.

So, for now, continuing in Rome...

Today we decided to take the day for historic Rome according to the Michelin guide.

I usually prefer Frommers, but their book has become too large to carry and consult.  My friends prefer Lonely Planet, but I've become skeptical since reading Thomas Kohnstamm’s "Do Travel Writers Go To Hell?", detailing the ways that he cut corners in compiling advice.  Even though his experiences are probably universal, the fact that they happened at a particular company is warning I can't ignore.

This is my first time trying the green book: it seems to have better reviews of architecture and history, but it's very difficult to find things inside of it.  Places are arranged by neighborhood, which is almost impossible to use quickly when you don't know (and can't spell) where things are.  The "One day" tour also covers a lot of ground: it became clear when we started at 8:30 and had only hit the Coliseum and the Palatine Hill by noon that we needed to find an alternative to walking between venues (NOT cutting time from seeing the venues themselves...).

The guide made the suggestion that scooter rentals are easy and cheap and, indeed, they are.  30 euro for a full day, 18 year minimum age.

"By the way, our scooters are out, so we'll upgrade you to a full 125 cc bike for only 40 euros total.  Be back by seven and wear a helmet please."

So it was, with my son at the controls and me on the back, that we launched into Rome's traffic on a shiny black Dink 125.  Pretty basic transportation, but also pretty powerful for our level of experience.  It's fully capable of getting up to 80 km/hr without much effort, and I found myself perched up above most of the compact cars pressing in around us. 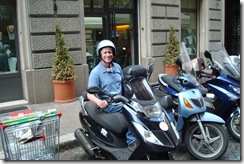 Still, it was a fun day, and a totally unique experience in Rome.

Early on, we found that traffic in Rome moves briskly, ignores lane markers, and, indeed, ignores most traffic signage (including stop signs, stop lights, do-not-enter signs, and bus/taxi lane markers).  Not that things are that well marked to begin with: routes to major sights are poorly marked, bus lanes spring out of nowhere, and roads plunge into tunnels and traffic circles without guidance or warning.  The carabiniere simply wait on the sidelines, everywhere, to clean up if something happens.

In this circumstance, I was actually glad that William was driving.  I said the other night that young people have confidence in themselves, and it gave him just enough edge that he could sort out situations and (generally) handle them properly, where I would have analyzed and hesitated (and crashed).  I could apply my confidence to navigation and map-reading (and girl-watching). 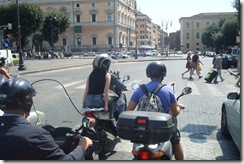 We also found that the added speed did not simply get us from place to place faster: it actually got us lost over wider areas.  Arno Penzias made the same observation once about faster computers.  I would look at the map and say, okay, if we are at the Spanish Steps and want to get to the Trevi Fountain, it's easy: down a block, right, forward two blocks, left, and one kilometer ahead to the square.  The problem was that Rome is filled with one-way streets, so the end of the block would have a blue arrow pointing left, then we would follow the flow for a half kilometer searching in vain for a street right without a do-not-enter.  Then, finding one, we would end up an a series of one-way handoffs and lane splits until I was so turned around that we had to pull over and start again.

At least parking was a snap: there are blue-line areas for bikes to park everywhere, and nobody seemed to want money.

So, we really covered everything we wanted to see, had a lot of serendipitous drops into neighborhoods that we wouldn't have entered otherwise, kept the carbon footprint low, and survived to toast the tale at the end of the day. 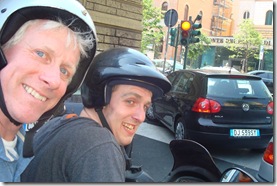 Posted by Dave Hampton at 10:47 PM 3 comments: Links to this post 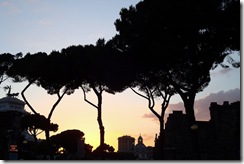 My son returned to the Netherlands with me last weekend: after a few days exploring Arnhem and Amsterdam, we shifted south to Rome.  He said that he wanted to use his Latin (live and learn) and see the artifacts that he had read about in class.

It's a hot day here, merging into a beautiful evening.  We walked over to the Coliseum, and it didn't disappoint either of us.  A day of Roman ruins tomorrow, the Vatican on Friday, back on the weekend in time for the quarter-finals? 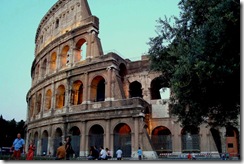 Posted by Dave Hampton at 10:03 PM No comments: Links to this post

'not the Dutch I remember...

...but a delightful midsummer evening with a packed house in Arnhem's Korenmarkt square, enjoying their Euro2008 win over Romania.

'Something about numerously drunken Netherlanders lighting orange flares and smoke bombs with every goal, then swaying and singing "We are the champions" en mass at the win, is going to be an endearing and enduring memory. 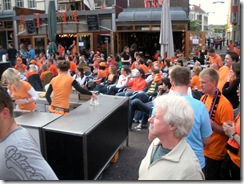 Catching up back in the Netherlands

** It was a busy week in the US without a break and, despite having fun catching up with friends and kids, it still feels good to be back in the Netherlands.

My son came back here with me: we'll spend a few days here and a few days in Rome, catching up on life's next steps. I asked him what he wanted to see or do while over here: running the car around the Nürburgring Race Track turned out to be high on his list. I'd never even heard of it, supposedly the most difficult and dangerous track in the world, now open to the public just south of Koln. One more thing to add to the list of places to go, things to see...

** It's also nice to step back and away from the saturation coverage of President Bush again. The Supreme Court decision last week, directing 5-4 that the Guantanamo detainees have their day in court to face their accusers, brought out his predictable arrogance of "Just because I have to accept what the Supreme Court did, I don't necessarily have to agree with it." It's all bluster, backed by a chorus a talking heads warning that people will die because of this ruling. It is discouraging to hear: the European Trip doesn't sound like it went any better. At least he wasn't dancing this time.

** The many blog posts about the Oranje-Fever didn't do justice to the actual flood of decorations, endorsements, and commercial connections everywhere referencing the team and the tournament. A Welpie now graces my front window, fostering stronger cross-Atlantic ties with my smitten neighbors. Shameless, I know. Still, I have stopped short of putting the Tournament Browser on my web site. I've already been advised not to plan any meetings for after 3 pm tomorrow because everyone is going home early to watch the match.

** Sea-Tac Airport has announced that, in an effort to relieve congestion in security lines, they will ask people to voluntarily assign themselves to one of three subgroups: "Frequent Fliers", "People who think they need help", and "Families with children". Are there really any circumstances where someone would voluntarily assign themselves to any line but the first one?

** There is a lot of talk about how people are increasingly living "Connected" lives because of the ubiquity of mobile Internet platforms and social networking applications. I think that we are actually living more "Extended" lives. Because we can keep in touch so many people so easily, it feels like the world just as easily becomes our stage. It's largely an illusion to believe that they are all listening and interested.

However, I was surprised at a recent scientific conference by the number of acquaintances who knew more about my activities (and interests) than I expected because they's read my LinkedIn entry. It's a bit spooky: I find myself trying to remember when I would have seen this person to tell them all of the things that they seem to know.