Well, 'back among the Internet-alive again.  I'm still out of the country, holed up in Switzerland for a day of break before the final drive back to the Netherlands.  The Italians make it impossible to access the Internet in many places: there is an anti-terrorism law on the books that requires passport-registration in order to use e-mail and fax.  It's ironic when contrasted to the lax state of Italian border security: I am always just waved through at the Swiss border with only a cursory glance.  (The Germans, in contrast, take their responsibilities to safeguard the EU frontier at Switzerland very seriously.)

'lots to catch up on, of course, but this will be quick today.

It's been a long trip: from Arnhem through Paris and Lyon in a big arc down into Italy through the Mt. Blanc tunnel.  Then a sprint across northern Italy to Bologna for the Computers in Cardiology conference.  After a couple of wonderful days there, I joined researchers for a satellite conference in the small hill town of Bertinoro for a few more days, getting a side trip to see the mosaics at Ravenna.  Then a two-day weekend drive through Umbria, stopping in Assisi and Spoleto on the way to Naples for a Monday meeting with physicians.  A half-day in Pompeii, a half day out on Capri, and a half-day driving the Amalfi coast road rendered a feeling for that part of Italy, then it was a sprint back north.  Again in Umbria for an evening stopover at a favored hotel and a day and a night in Cinque Terre, just south of Genoa.  The miles were starting to wear thin, so Grindelwald, with the mists even now lifting over the Eiger, makes a wonderful waypoint before driving up into Germany and home.

I was hesitating to visit Cinque Terre: there have been so many wonderful pictures and descriptions by other expat bloggers that it felt like someplace that I should see, but at the same time, it sounded a lot like the Amalfi coast and I was starting to get travel-weary.

In the end, though, I'm glad that I did both, and both are worth seeing.

Similarities: Amalfi and Cinque Terre are both stunningly beautiful areas to visit, rugged green coastal mountains that plunge straight into the sea along the southwest and northwest coasts of Italy, respectively.  Each has colorful fishing villages that nestle in the valleys between the teeth of the cliffs, and winding roads above that give breathtaking views of the scenery from on high before plunging into the valleys.  Each is well worth a full day of exploration.

DIfferences:  Amalfi is much longer: almost 50 km vs. perhaps 10 km at Cinque Terre.  The roads are much more difficult along the Amalfi coast: they are narrower and crowded with tour busses and trucks that force endless negotiation for right-of-way against cliff edges and walls.  However, the roads do rise and fall to connect the villages: in Cinque Terre, the main road stays high on the cliffs and occasional side roads dip to the seaside villages.  Even those roads stop short of the towns, requiring a 10-15 minute hike to descent the last bit.  The trains and boats are probably a better bet to get between towns in Cinque Terre than a car, while a tour bus might be preferable at Amalfi.

Because of the number of tours, Amalfi tends to have an older crowd, more British and German groups.  Cinque Terre has amazing hiking that attracts a more active British and American group decked out with top-line hiking sticks and shoes (ironic since the footpath is pretty well maintained with steps and paving).  The towns tend to be more tourist-oriented in Amalfi; Cinque Terre is a bit more weathered and working.

In all, forced to choose, I would give the nod to Cinque Terre: it is more compact, has a more 'authentic' feel, and better pricing.  But if you are in Naples and have time for a slow drive, Amalfi is a good one. 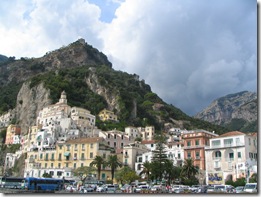 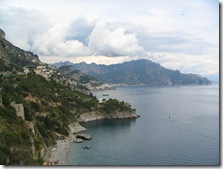 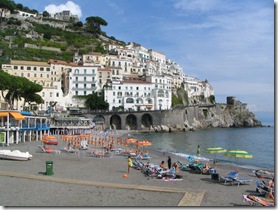 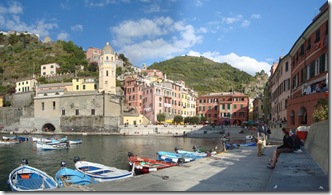 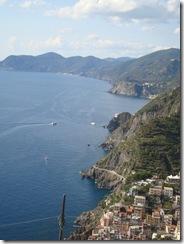 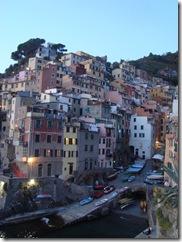 Posted by Dave Hampton at 10:55 AM 5 comments: Links to this post

Still moving south: staying in Naples and visited the amazing excavations at Pompeii.  The site really has a lot of presence from the people who were there: the streets and ruins really evoke the city and their everyday things are still present in their homes, shops, and squares.  Vesuvius is a dominant presence, both over the ancient ruins and the modern city. 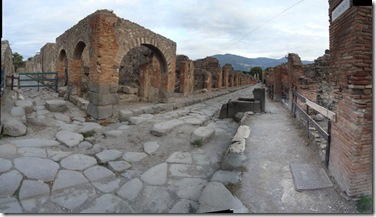 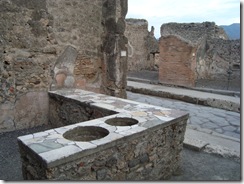 Posted by Dave Hampton at 12:43 PM 2 comments: Links to this post