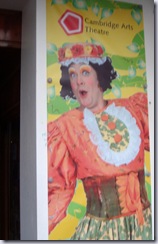 Cool, I said, filling with visions of Marcel’s striped shirt and flowered hat.  Back in grad school, I took a pantomime course and loved it, even though it left me with a permanent tic for gesturing to make points.

It’s a traditional British family event.  There is a story, but lots of topical comedy thrown in, some slapstick.  The audience shouts at the performers when signature lines are presented.  And men play the women, and women play the men.

I wouldn’t miss it….

Just be sure to do some serious drinking before you go…

And so, it was off to the Eagle Pub and then off to the Cambridge Arts Theater.  Panto is a children’s event; a family tradition across generations.  Yet, there is no way to know what to expect: people’s descriptions suggest the low broad humor of Benny Hill or the cross-gender antics of Rocky Horror. 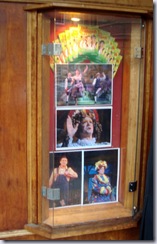 Jack & the Beanstalk turned out to be, instead,  light vaudeville.  The connecting  background story was a well staged fable, with an impressive vine and lumbering Giant, surrounded by lots of sunny characters bouncing through pop-musical numbers to accelerate the story. Between narrative episodes, various characters drop through for audience interaction.  The green-faced villan makes threats and is roundly hissed.  The farm hand, “Silly Billy” cheerleads his signature greeting.  The matron of the show, a heavily made-up actor, presides over the audience like Carol Burnett playing Auntie Mame.  The winks, nods, and wriggles keep things engaging and everyone participates.

The kids love the fable, waving lighted sparkling wands and swords; their whoop at the inside jokes and sly asides.  Everyone eats up the slapstick skits.  The humor, less ribald than I expected, reminds me of how Sesame Street (moreso, the companion reading show The Electric Company) managed to operate on both the child and adult levels at once.

It’s a thoroughly enjoyable evening without a good parallel in US theater entertainment, Have a drink, take the kids, and lose yourself in it if you get the chance.