Snow in Seattle: so goes Maastricht

I’m beginning to think the curse follows me.

Dutch weather often parallels the weather in Seattle.  Both locations are maritime regions at low elevation, leading to eerily similar daily temperatures and precipitation.  Still, I hoped for a winter divergence after two brutal weeks of snow in Seattle, believing that the Netherlands would be warmer and drier.

And it was.  At least, it was until this morning.

The first hint of trouble was the brightness of the sky at 2 am: the glow usually heralding fresh snow.  By daylight, it was snowing hard and by mid-morning three inches had accumulated. 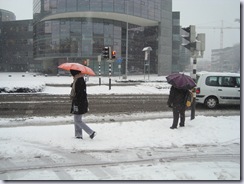 It makes for beautiful panoramas and treacherous cobblestones.  Characteristically, the Dutch soldiered on with their bicycles and opened umbrellas. Businesses opened slowly, if at all; the roads are empty.

It’s a good day to work from home, venturing out for groceries and a few pictures to share -- 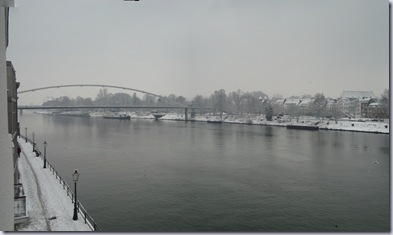 These are excellent photos! Welcome back!

Thanks; 'nice to be back here. I've genuinely missed it all: keeping up with all of the food and festivities by reading about it on blogs only made me want to hurry back!

Hi..these are really great photos!..I spent my Erasmus period in Maastricht last year so I love everything of that lovely city!..but I'm a bit disappinted because when I was there it didn't snow!!!..and in seeing your photos I realize that I missed a wonderful white world!;)

Hi, Stefano; thanks for checking in! The move to Maastricht has been a good one. I was hesitant about moving south, but have found a lot to like in the city. You're right: The snow really fits the season. I've set my computer in the front window to enjoy the changing views as the snow somes and goes.