Winter is starting to stretch long, and there were cheap flights south that were too good to pass up.  To Madrid, Spain, in fact.

I hadn’t visited Madrid since 1985, and my memories were dim at best.  What I found was a modern white-stone and red-brick city under warm blue skies.  People were sitting in outdoor cafe’s as New Orleans-style jazz played in the squares.  Painted walls and tiled storefronts decorate traditional buildings along the curled streets of the old city center, surrounded by the  modern curving skyscrapers and straight boulevards of the modern capital. 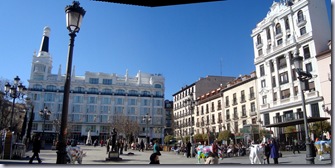 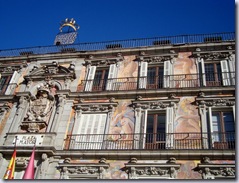 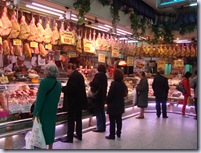 People were quick and intense, food was a mix of traditional Spanish, Basque, and Fusion.  A day starts with a plate of churros  for dipping into a cup of chocolate.  Mid-afternoon was tapas, not the polite plates served in Maastricht, but vigorous theater for people crowded tightly around the bar sipping red Rioja wine.  Waiters slashed thin strips of Iberian ham from a joint on the counter, toasted thick chunks of bread painted with olive oil, layered on goat cheese and tomatoes, and served the snack with olives and spiced red sausage.  Just point, eat, count up the sticks, and pay, if you are aggressive enough to get to the counter. 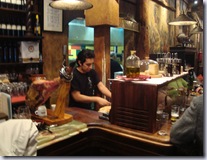 The art and architecture is wonderful; the streets cleaner than any other city I’ve ever visited.  Dinner starts at 10 pm, music and clubbing at midnight, the streets fill with people heading home about 4 am.  No wonder the city closes for a nap for hours every afternoon. 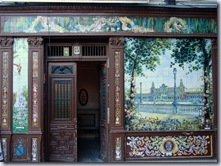 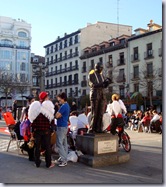 Beautiful pictures! I do have to try and get there myself one of these days.

But yes, this is way up on my list of good places to go.

Madrid is the cure for the Dutch winter blues! I wish I could get back there one more time before I move, but it's not in the cards.

Madrid to the south, Carnivale in the north: February never looked so good!

I liked yoru story about Charleroi airport: I tend to still use Eindhoven, but you're right about the fun of getting through Brussels