Loose ends from a few days of travel 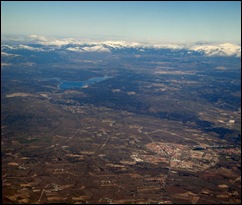 The first glimpse of a new place is always exciting: the descent through the clouds, the distant snow-capped peaks, the sprawl of the city, then trying to put names to features and spot buildings.

On this trip, though, the flight attendant insisted that all cameras be shut down  during the descent with the argument that they were battery-powered devices, like MP3 players and cell phones, that must be turned off.

I took a picture just for spite. 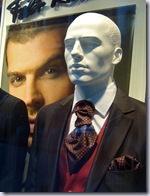 I brought a tie and jacket for a nice dinner out, but the latest style being shown in the shops was not flattering.  Sort of a cross between an ascot and a traditional tie, it was wide, loose, rumpled, huge.  Maybe the vest and matching handkerchief would help? 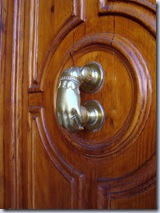 I read a book once that recommended paying attention to the small things in cities: how the overhead wires run, where there’s a track of an abandoned streetcar line, how they cap their downspouts, what they mount on their doors.  In short, look up and down, into corners and through windows, rather than just following the street signs.

I find that there are always interesting and unique little artifacts to discover, like this doorknocker.

Several of the local bloggers I follow have raised the ethics of including photos of people in blog posts without their permission. Some have started blurring faces or avoiding people entirely in travel pictures.  In public, I assume that everyone yields their privacy, and I don’t worry about street pictures.  But I’ve become much more circumspect about pictures from stores or restaurants, cropping people out or only taking pictures from behind. 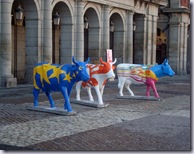 Love the cows! Unfortunately they weren't around when I was in Madrid - your pictures are a good substitute

The cows (steers? bulls?) are interesting, especially the one you're posing on.

The cows/cattle are great! And excellent points on everything in this entry :-) Even down to the attire. And good for you for taking that picture on the plane!

I am one of those who blurs faces of strangers in public, but I usually try to do it 'artistically' ;-) So one knows there are people, but the item I am photographing becomes the focus. I'll add a blur or a fish eye lens effect to it with Picnik photo editing.

Thanks, Isabelle: I didn't think much about posting pictures with people on it until you and one other blogger raised the question. I thought about it and agreed that you were both right. It made me aware to take a bit more care in the cropping and composing of pictures so that I didn't inadvertantly embarass someone. It's always a tension: people make a photograph alive and interesteng, but I do feel some responsibility for how I use the image.

Hi, Nan and Patti: cows, they were everywhere. I remember when they did it with pigs in seattle, I think it's a themed public art taken up by lots of cities these days.

These were all very clever and creative, and people were posing with them all over (and I needed a new Facebook profile image...)