I’m on the Lot flight back from Poland, inexplicably put at the back of the plane with ten rows of empty seats in front of me before the rest of the passengers.  Since this might be an honor reserved for select guests, I haven’t objected.

Besides, it gives me some quiet time to organize photos and thoughts without someone dropping their seat into my lap.

I expect Poland to be a stone-cold country of monolithic block buildings.

I made that self-acknowledgement as I arrived, then set out to deliberately look for ways to prove myself wrong.  I’m happy to say that Poland did not disappoint: there was lots to experience and to learn about.

So, a few pictures and observations from the two days;

The people were delightful.  They took time to show us the city and to guide us through the local food and shops.

The weather was warmer than the Netherlands, cool with a light dusting of snow.  I loved the gaunt trees against the grey sky in the parks: I can’t help thinking of spy novels.

Unfortunately, there was heavy fog most of the time that

The businesses only turn on lights when they have to, leaving hotel lobbies and streets dark until well after dusk.

The hotel staff took cigarette breaks outside my room at the end of the hall: it was impossible to sleep for long.

The meaning of everyday signage is impenetrable.  It’s a bit like Asia, where there are no shared roots in common words.  Dual-language guidance was very rare.

Food tended towards sausage, dumplings, cabbage, soups, but meals were hearty and good.  As in Italy, the local quality is much higher than the ‘ethnic neighborhood’ quality you get for similar food elsewhere.

The ‘egg on toast’ variant served for breakfast was pretty terrible, though. 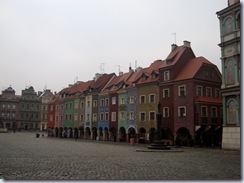 Amidst the unfortunate examples of concrete-brutalist architecture are a lot of red-brick buildings with black ironwork.  The city is being renovated on all sides, but I hope that they preserve these treasures.

The architecture around the Market Square was amazingly Dutch. 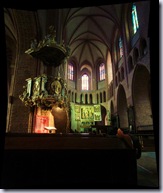 The old brick churches are unique, and the ever-present statures of Pope John-Paul remain a deep source of national pride.

The local currency, the zloty, has declined 40% against the euro during recent months, causing huge increases in the cost of imported goods.  It really illustrated the impact that the financial crisis is having within the EU, and the risks of remaining outside the shared currency.