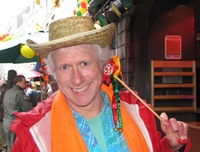 Yes, this was a serious party!

'Het Mooswief' (the greengrocer woman) was run up the pole on Sunday morning, then King Carnivale led his (3-hour) parade through the Wyck, across the Stone Bridge, and into the Old City.

Once ignited, his party ran through the streets and into the wee hours for the next three nights, culminating in the Fat Tuesday lowering of the Mooswief in Vrijthof Square at midnight.   The music and celebratory laughter echoed across the river, little bands of horns and drums rushed back and forth across the bridge, and all manner of costumed revelers ran along the Fietspad below the apartment.

The costumes were unbelievably good: people put incredible thought and subtle humor into them.  My favorites included: 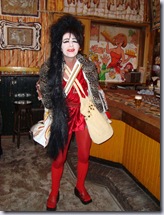 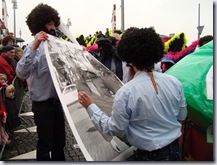 A banker losing his head to the downturn 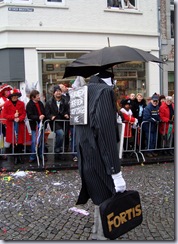 Barak and Michelle on CNN Live 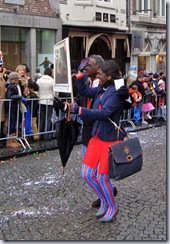 My favorite Dutch artifact was the ‘street urinals’ placed strategically around the old city.  It was especially helpful that they labeled them with a little “Male” icon in case there was any gender confusion over their use. 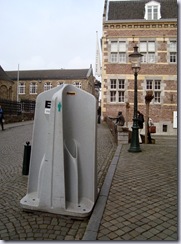 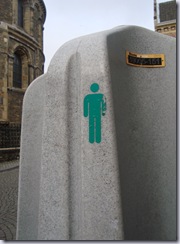 Are you trying to mimmic the expression of the clown face you're carrying? Because. OMG.

It wasn't intentionsl...honestly, it wasn't even my idea. Dress up in a bit of red, green, and yellow they told me...everyone does it, they said....

Fortunately, it never got to 'drink this, snoke that...I have no excuse.