It’s been a long week; ‘sorry to have been scarce.  The ‘final final', finally’ was due on Friday evening, a 3000 word essay that took most of the latter part of the week to compose, edit, and polish.  This is for a class in Organizational Theory that I’ve taken through Stanford Distance Learning, completing work on a management certificate that I began back in 2003.  The class was great, but the final exam (describe the ideal organization, defending your answer with class examples’ was hard.  I suspect that even with all the work, my effort was still lacking a bit (partly because the assignment was so vague), but it’s wonderful to have it behind me.  It’s  probably my last classroom class, ever.

‘off to Carrefour early after a visit with friends., passing through a few villages along the way. I always enjoy the displays that the Dutch put out when a new baby is born.  These are typical: they really go all-out in putting figures in the front yard and decorating the houses. 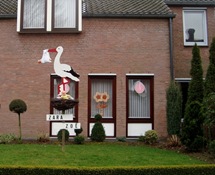 Back in town, a bit of green has started to frost the trees across the river as the temperatures rose to 16.  The sun was out, and I even got a tickle of warmth on the back of my neck as I ran errands.  Hopefully things will be in full flower by the time I get back from the US in a week (the weather is reported to still be terrible there). 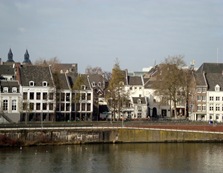 The neighbors were up and hammering on a project at 7 am: the Dutch don’t respect weekend lie-ins like the US does.  Potted plants and patio furniture are starting to appear on balconies and rooftops behind the apartment; merchants have started moving tables onto streets and squares.  Easter candy displays are everywhere, and tulips have begun to return to the shops. 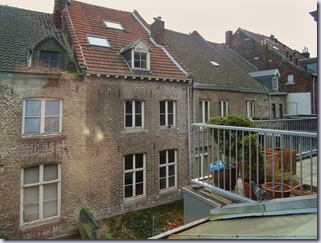 There was even time to fiddle with an egg ring that I’d gotten for Christmas, supposed to gather a fried egg together to make it idea for sandwiches.  The concept seemed to work well at first, but fell short when it came to the flip.

Email ThisBlogThis!Share to TwitterShare to FacebookShare to Pinterest
Labels: Everyday life in the Netherlands, Idle chit-chat