Variations on an evening meal

Cognitive scientists theorize that we simplify complex social actions into pre-patterned scripts.  Paying the store’s checkout person, leading a business meeting, rigging a sailboat, can all be reduced to a sequence of process steps and conversational exchanges that become second nature.  And, despite knowing that these scripts are culturally specific, I still fall into the expat trap of applying familiar scripts unthinkingly.

Dinner in Turkey, for example.

It usually ask the hotel staff for a recommendation, giving a few parameters such as meat or fish, expensive or budget.  Their first recommendation, the nearby terrace restaurant Doy Doy, was a great find: abundant, quality food with a sweeping view of the Blue Mosque as the sun set.  The bill was about 25 TL, a bargain by western European standards.

The next night, perhaps a good fish restaurant?  The concierge recommended Yengec, a popular restaurant with streetside dining in the Kumkapi district.  Superb food, moderate prices (perhaps 50 TL per person), and they provide transport from the hotel. 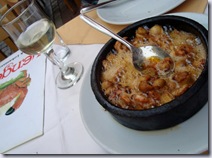 Indeed, the food was excellent; the waiters were friendly and full of advice.  Can’t choose between red pepper and seared shrimp appetizers? Try a bit of both.  White wine is best with the fish of the day; Turkish coffee is the best complement to a sweet banana and honey dessert.  Indeed.  The sun set, the streets filled with locals, conversation flowed, and the staff beamed.  Musicians arrived with the bill, almost triple my expectation. Shame on me for not keeping track: still, it was a lovely evening.

A meat restaurant perhaps?  Absolutely: Develi, in Samatya. I managed things more closely, sticking to items with listed prices, waving off the intermediate

courses, and having wine by the glass rather than the bottle.  The huge plate of mixed kebab was wonderful, but almost beyond finishing.  Dessert, strong coffee: the food was, again, wonderful, aided by quick and attentive service.  But the bill was half again as much as I expected. I couldn’t help but notice the nearby tables were immersed in conversation, barely noticing the waiters much less actively managing them.

Clearly, I had the wrong approach.  Wonderful food at delightful restaurants, yes, but too much food, too much money.  The young concierge at the hotel had given consistently good advice, so I sat down with him to ask how a Turkish native approaches an evening of dining together.

Turkish families don’t go out to eat often, it’s a special evening when they do and they don’t worry about price.  At a good restaurant, they place themselves in the hands of the staff, who quickly size up the group and arrange for the meal.  Dishes of appetizers, intermediates, and main courses are brought to the table, providing a flow of food and drink for the guests.  Dishes are shared, rather than everyone ordering something on their own.  When the bill comes, it is simply paid,  not dissected.

This was very consistent with the way I’d seen dinner play out at adjacent tables.  The wait staff was probably somewhere between confused and offended by my active interference in their meal, and I may well have missed some of the best experiences by selecting and rejecting.  I just hadn’t realized that Dutch scripts don’t work at a fine Turkish dinner.

‘last night: the hotel staff suggested the Golden Horn, a rooftop restaurant with spectacular views of the mosques and the Bosporus.  This time, I absolutely settled back and let the wait staff organize a delightful flow of traditional Turkish dishes. Relaxed dining, focus on sparkling conversation: remarkably better experience.   And chill on the bill: it was roughly the same for a far better evening.