A last look back at TEFAF 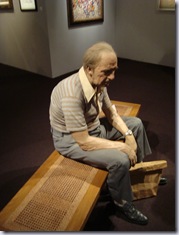 I’m still on the road, approaching Oklahoma today, but with a few bits of miscellany to post before I archive the Euro Fine Art Fair photos.  I’ve touched on the modern and masterwork collections, which make up the bulk of the exhibits.  Today I wanted to show a few bits from of the smaller specialty collections.

These exhibitors handle Greek, Roman, and Egyptian statues, coins, and carvings. It’s all very Indiana Jones, and surprising to see the stone for sale.  These are the sorts of things that trigger ownership and heritage disputes between nations, and I wouldn’t think that private collectors would want to take the risks. 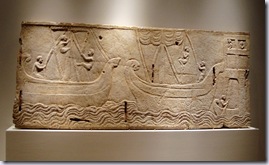 Some of the more unusual rooms had themed sets items, like worked metal weapons (left) or antique door-knockers (right).  And, of course, the Dutch vendors with lovely Delft plates and figurines. 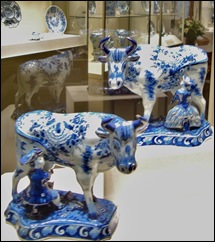 There are a number of French, English, and Italian rooms that hold glass, furniture, and knick-knacks (I’m sure there’s a  better collector’s term for the bits of gold that sit on side tables).  They were interesting, but I really liked the Clocks, Barometers, and Instruments collections best.  The gold and brass artifacts are a wonderful synthesis of art and engineering in great variety: no two alike.  My parents used to collect antique clocks when I was growing up, and there were always interesting designs hanging around the house.  It’s something that I could easily be tempted into again. 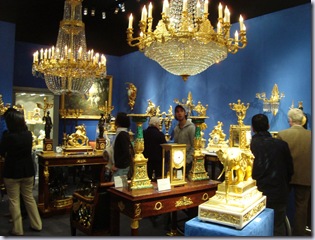 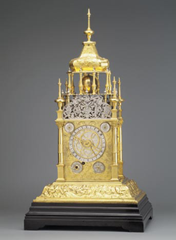 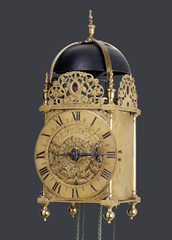 Posted by Dave Hampton at 6:21 PM No comments: Links to this post

Then and now and TEFAF’s Old Masters

I stayed south of Minneapolis this trip, driving across the city at sunrise each morning on the way to the corporate campus. It’s a typical American city, with today’s skyline, left, crowded with skyscrapers. It’s all so new compared to the Netherlands: consider what Minneapolis might it look like to a person born 150 years ago? ‘ probably not much more than a village on the prairie (right).

In contrast, a visitor from the 1860’s might recognize a lot in Maastricht: Dutch villages have a longer life and a more enduring continuity. I’m reminded of that each time I pass buildings in Maastricht with keystones hundreds of years old. I was reminded again as I passed through the ‘Old Masters’ section of TEFAF, filled with Dutch masterworks suffused with yellow Dutch Light. On close examination, each had buildings, activities, people that were instantly recognizable, despite being hundreds of years old. The works are by Cornelius Springer, Willem Koekkoek, and others, unfortunately unattributed here, but always appreciated.

Think about whether these scenes look as contemporary as they do traditional, in architecture, canals, activity, human scale. Then consider whether comparable US cities are as enduring. 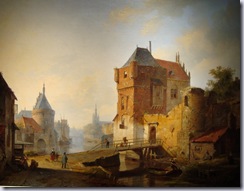 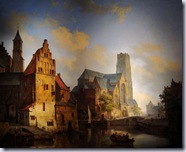 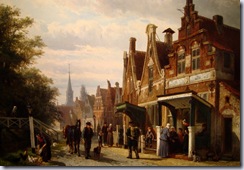 Posted by Dave Hampton at 6:38 PM No comments: Links to this post 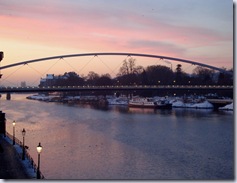 I’ve been wrapping up the taxes for 2008, which always includes a look back at the year-over-year change in the household accounts.  As would be expected given the economic situations, 2008 was a dismal year.

As with many US households, the long-term financial goal is to achieve ‘critical mass’, where investments generate enough interest to provide  income for retirement.  Those finances, in turn, rest on four pillars: the house, the savings, stock options, and retirement accounts.  The general advice had been to contribute regularly, take some risk, diversify, don’t sell on bad news, limit debt, and live within your means.  All of that advice sounds hollow now.

It feels like everything got hit at once: diversified accounts that were supposed to be uncorrelated all sank together. Interest rates have dropped to less than 2%, so bank CDs,  money-market and bond investments generate almost nothing. The wild swings in exchange rates have hammered overseas accounts: the euro is down 45 cents on the dollar in a year, the pound is down 60 cents.  Stock options are entirely worthless for the foreseeable future.  Fortunately, the house value is still holding up in our corner of the market. But pension programs, which shifted from defined benefit to defined contribution years ago, have probably lost half their value as 401(k) and IRA investments got hit as the global markets dropped in sync across asset classes.

I don’t think that this situation is unique: everyone says that their nest egg has shrunk 30-50%.  As people lose their jobs or suffer cuts in benefits, they have to draw from savings, compounding the problem.  There’s a temptation to cling to whatever diminished job remains in hopes that things turn around in a few years, restoring the assets needed to generate retirement income.

This isn’t going to happen: A whole generation of baby boomers is about to move into retirement without enough money to live off of.  It takes two and a half million dollars to generate $50,000 per year when CD’s are paying 2%.  Most people have far less than that now, and cannot make it up in this financial climate.

This is, potentially, a huge social problem: what happens when the self-directed retirement system crafted since the Reagan years fails to deliver on it’s requirements?  Government and industry can’t and won’t, respectively, take on the role of providing a net.

We will need to scale down and work longer than anyone realizes over the coming decades.  It’s going to be a big change in plans, and I suspect that people won’t go quietly once they realize it.

Posted by Dave Hampton at 12:24 PM No comments: Links to this post

Email ThisBlogThis!Share to TwitterShare to FacebookShare to Pinterest
Labels: Economics

'Back in the US for a few days

Hopped the pond to Minneapolis today for a week's round of meetings …the usual 3-hour drive up to Schiphol required me to hit the road at 5 am. Ugh…but was up at 3 :30 anyway…not sleeping well. On the way over, I watched the Bond film “Quantum of Solice “(much better than expected), read 150 pages of a book of European history (got the background for the first world war firmly in mind now…), and arrived to find warm summer temperatures and, paradoxically, mounds of snow in the parking lots. The locals are telling me that I hit it lucky. 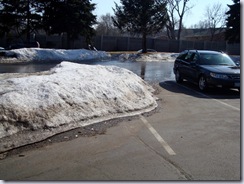 I’ve dropped anchor in an Embassy Suites: the contrast between the lush atrium interior and the stark parking exterior always intrigues me. I suppose it’s the Mall of America in miniature. So different from the inns and apartments that tend to be the norm back in Europe. 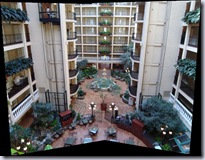 I always celebrate the first night of being back in the US with a big slab ‘o meat. I’m sure that it’s terrible for me, but it is so good. 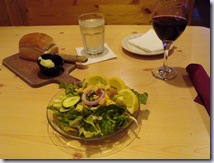 Otherwise, jet lagged out…plans and notes to write, but it will keep… Until then, to bed (if I can get over the novelty of understanding every word on all 200 television channels) 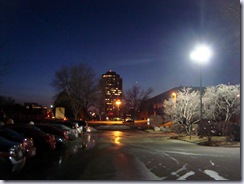 Posted by Dave Hampton at 2:32 AM 2 comments: Links to this post

Email ThisBlogThis!Share to TwitterShare to FacebookShare to Pinterest
Labels: US Perspectives

A few highlights from TEFAF

The European Fine Art Fair (TEFAF) is being held in Maastricht until March 22 in the MECC (the convention center).  It’s a bit pricey: 35 euro per person for a day pass and 20 euro for the catalog.  But the art is worth the price: this is a private collector’s show, so there are a lot of wonderful works that will not be seen in public again. 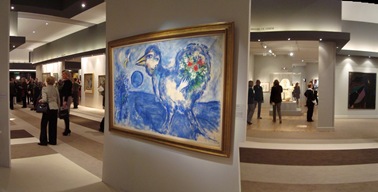 The show is huge: allow at least four hours to get a general walk-through of the various dealer’s exhibits.  The floor space is divided into Old Masters (actually a mix of classical and more contemporary), Modern (generally anything in the past 150 years), Antiquities (Greek, Roman, and Egyptian pieces), and Antiques (clocks, jewelry, and furniture).   I’ll cover the Dutch maters in another posting, but wanted to show a few pictures from the Modern area today 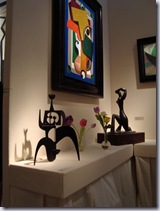 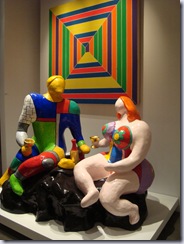 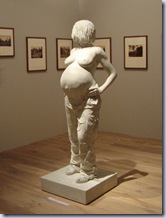 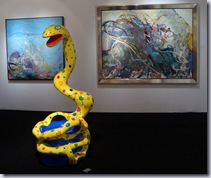 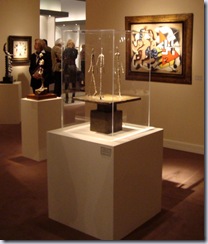 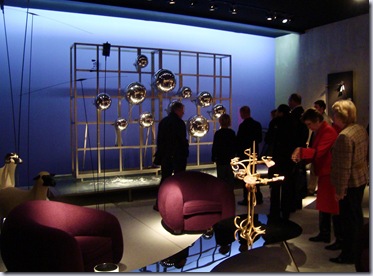 I always enjoy the Modern  area most: there are lots of interesting pieces and a scattering of different works by well-known artists. The quality isn’t always high: there are too many lithographs and preliminary works being sold as though they are major works.  But it’s always fun to find something original and raw that a well-known or unknown artist has done.

Posted by Dave Hampton at 7:17 PM 3 comments: Links to this post