Views from Easter Saturday along the Maas

It’s a beautiful, if unsettled, start to a long weekend: warm weather beneath threatening skies.  Foliage is now fully out along the river, the sightseeing boats are overflowing with sunglassed voyeurs, the sidewalks have filled with bicyclists and cafes.

and, tellingly, universally, the sap begins to rise… 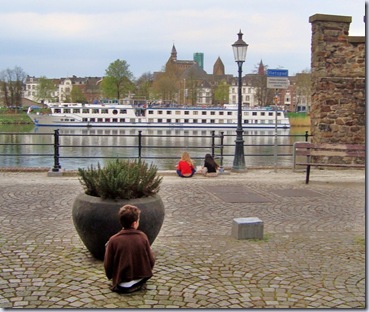 Posted by Dave Hampton at 12:55 PM No comments: Links to this post

The fact in the fiction

I was talking with a friend last night who is thinking of leaving his day job to start a new business.

Yes, he’s thinking about it even in this economic climate.

His rationale is that while the BigCo’s cut costs, programs, and people, innovation will spin out towards the industrial periphery.  We’re in for a few years of small shops and virtual teams until the industry starts to condense back towards the majors again.

Now, he reasons. is a good time to build evidence, value and position for the future: late winter before the economic spring.

His problem is, he can’t say ‘Look, I want to go do what you won’t.”  Instead, his attorney is recommending a vague white-ish lie: “I want to spend more time with my family / health / grandkids / interests /  traveling / giving back.” (Slate recently reviewed this time-honored strategy)  It’s a safe gambit: BigCo has a short memory and wavering focus.  Chances are that nobody will ever check up on how all that quality time is going.

Still, I think that there is more than a little truth in this.

First, if he really believes his own hype that he’s quitting his old job just so that he can show BigCo how things ought to be done, he’s doomed.   There had better be some leavening wisdom in his excuse just to help him keep his sanity.

Second, given a choice, who wouldn’t want to go pursue their own interests?

Why plunge straight back into the same less-fulfilling lifestyle, a combination of ‘do more with less’ work and evaporating benefits.  Like the post-9/11 period, I know that the downturn has stimulated talk among friends about proper work-life balance. Some have voluntarily cut their hours at work in response to management programs for payroll reduction, allowing them to put more emphasis on the lasting and fulfilling parts of their life.

I may only make another evening or two a week available for dinner with friends or life-drawing with charcoals. But, with spring blossoming across South Limburg, a goal of ‘taking more time for…” sounds like a good resolution nestling within my friend’s fiction.

Posted by Dave Hampton at 2:43 PM 2 comments: Links to this post

Spring from my window

You can see the season arrive…day by day. 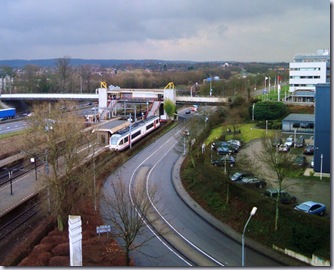 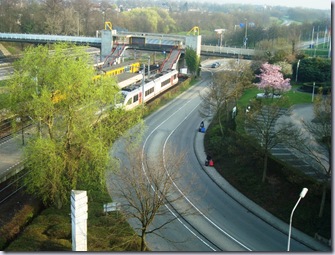 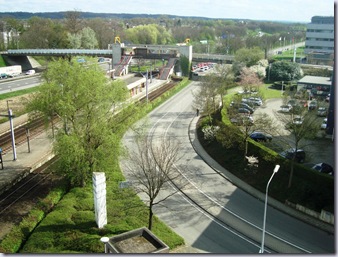 Posted by Dave Hampton at 10:22 PM No comments: Links to this post

The Prisoner’s Dilemma is a simple social paradox: two prisoners are isolated from one another and each is told that if they cooperate and the other doesn’t, they will be released.  However, if they remain silent and the other implicates them, then they will receive a harsher sentence.  If neither confesses, both will get the minimum sentence, while if both confess, they will receive an intermediate term.  The paradox is that the optimal strategy for each player is to betray the other, leading to a poor outcome for both.

A variation of this game is to play it repeatedly, giving each player the opportunity to punish the other for non-cooperative play.  Game theorists have shown that the optimal strategy for each player becomes ‘tit for tat’": initially refusing to betray the other, then responding in kind to the other player’s action from the previous turn.  Thus, despite the incentive to defect on each round, players tend to cooperate, building trust and achieving a better overall outcome.

I generally apply this strategy in everyday social and business life, assuming the best in others and trusting their actions unless they betray me.  You get what you expect from people.

Occasionally, though, I’ve found that this strategy spins out of control in cross cultural situations.

For example, I may ask a Brit-friend if they’d like some coffee.  “I don’t mind", they might reply, a vaguely negative sentiment in US-speak. So I give them a soda instead.  They gauge me to be an unreliable drink-fetcher, and go get their own coffee.  I’m insulted and mutter something about ungrateful inconsistency.  Merriment ensues.

We’re both practicing ‘tit-for-tat’, but the iterative connection between cause and effect breaks down because of cross-cultural misinterpretations.  There are any number of everyday situations where one person may innocently come across as rude or insensitive, leading another to erroneously respond badly. Or, in game-theory language,

“A one-time, single-bit error in either player's interpretation of events can lead to an unending "death spiral", in which each side perceives itself as preferring to cooperate, if only the other side would. But each feels forced into repeatedly punishing an opponent who continues to attack despite being punished in every cycle. Both sides come to think of themselves as innocent and acting in self-defense, and their opponent as either evil or too stupid to learn to cooperate.” [1]

Sound familiar?  I suspect that this is very common in expatriate social situations.

A neighbor waited for me to introduce myself.  I thought their silence was rude and unwelcoming, and so avoided them.

I didn’t present an incentive appropriately to an employee, which they interpreted as intentional lack of respect.  So they raise the issue with HR, landing us both in trouble.

Best intentions, badly communicated, can lead to cascades of tit for tat.  How to avoid the trap?

“Tit for Tat with forgiveness" is always good: keep responses proportional and be quick to offer an olive branch.

“Tit for two tats” is advocated by game theorists as a way of promoting tolerance.

“Good humor”, says I, along with a willingness to call a time-out, have a sit-down conversation, and sort out the problem together. Sometimes it takes a mediator to get started, but I always like to make opportunities to unwind situations that, all too often for expats, turn out to be based on  simple misunderstandings.

Posted by Dave Hampton at 2:52 PM No comments: Links to this post 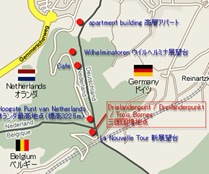 There is a mythical point on ancient maps called Drielandenpunt, where three great empires touch at a single point near the misty city of Vaals.  It has the further distinction of being the highest point in the kingdom of Nederland, over 300 nose-bleeding meters above the zeespiegel water mark.

And so, on a slow spring Sunday, I went in search of…

…adventure, within a few kilometers of home. In the United States, there is a spot where Utah, Colorado, Arizona, and New Mexico meet (the Four Corners Monument).  Drielandenpunt is a similar idea, a cross-cultural theme park atop a 20 km hill east of Maastricht (It’s not at all clear why it should be at the summit, but okay…) . 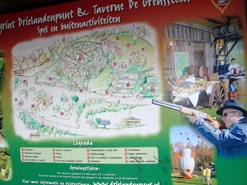 It seems straightforward, the logo shows a set of three monoliths and the guide-map has a rifle barrel pointing to the spot. ‘couldn’t be easier?

The first likely marker turned out to be the highest point in the Netherlands. 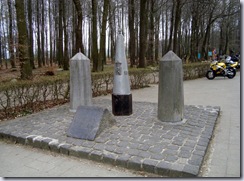 The second turned out to be a mysterious Belgian monument 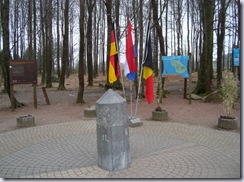 The third, a spindle near the restaurant, seemed promising, but was a false lead. 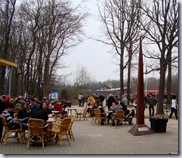 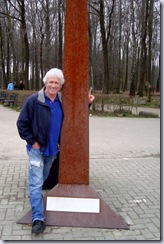 The on-site VVV suggested it was near the flags, left of the German observation tower. 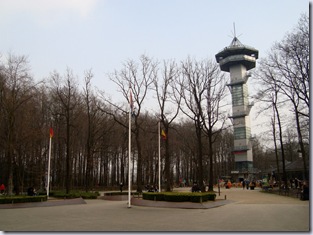 In the end, I’m not sure that the actual Drie- ever turned up.  The Tower, however. is an interesting study, in a Berlin Wall sort of way (there is barbed wire around the first level…).  A 3-euro ride to the top deposits passengers onto a vertiginous grating with more razor wire and a wonderful panoramic views that made up for the lack of a Punt to the whole exercise. 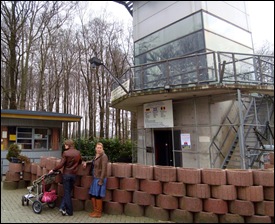 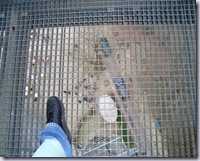 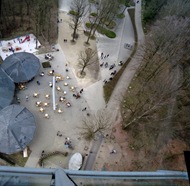 Posted by Dave Hampton at 8:51 PM No comments: Links to this post

Saturday evening along the Maas 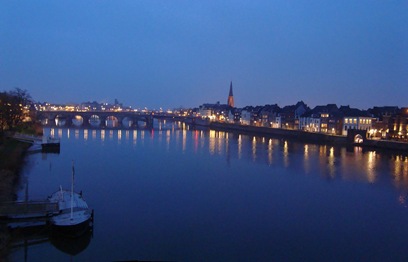 Posted by Dave Hampton at 3:52 PM No comments: Links to this post