The big sightseeing boats are becoming more common along the Maas, stopping overnight along docks beneath the old city walls.  I’m becoming familiar with the repeated schedules of some of the boats that ply the ply the waterway, and have tried to get a peek at the interior living and dining areas through binoculars when they park across the way.  It looks like a nice way to spend a weekend.

Early in the mornings, before the barge traffic is heavy, the crews get the day’s journey underway.  They sound horns, start the bow and stern thrusters, then, impressively, spin the boats end for end before heading downstream, blocking the whole river.  Then they collapse the superstructure just before they steam by so that they can get under the (raised) Stone Bridge.

It’s all a good show over morning coffee, waving to the tourists and watching the deckhands scurry to check the clearance at each step. 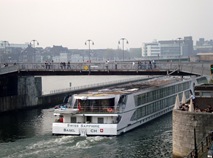 Posted by Dave Hampton at 12:14 PM No comments: Links to this post

Where are all of the squirrels?

I was lying in bed listening to the cooing and clucking of pigeons on the rooftops outside when I realized that a I haven’t seen a squirrel in months.  Ordinarily my yard is full of them in the US, running along wires, dangling off tree limbs, invading bird feeders.  I can’t think of a time I‘ve seen one here beyond the occasional encounter in the park.

It turns out that our normal grey squirrel, above, is unknown here.  It’s cousin, the red squirrel, lives deep in the local woodlands and is much less common.  In fact, the Dutch Nature Conservation Law, passed in 1994, protects red squirrel because it’s so scarce.  Various local groups, like the Squirrel Rescue Foundation, are trying to right the balance (while KLM dispatches 400 of them by mistake…).

Does money grow on trees?

You may think so as governments around the world ship trillions off to banks.  Americans also believe in Pennies from Heaven and Golden Geese.  But in Europe, it seems that money issues from the hind ends of livestock.  Or so the latest Albert Heijn promotion would have us believe (above, and see the animation for 5 spaarkaarten issued (from the animal) with every purchase, on the website).  Curiously, it mirrors a similar stone relief that I found in Dusseldorf last year.

Where do I go when the siren rings?

In the US, every town has civil defense sirens.  (I much prefer ‘civil defense’ to ’homeland security’, by the way).  These were originally set up to warn of nuclear attack, but are now used to warn of natural disasters.  If there is a flood, tornado, tsunami, or volcano alert in the Pacific Northwest (particularly prone to apocalyptic events), then the sirens go off and everyone seeks higher ground.

The Dutch have a similar system, tested on the first Monday of every month at 12 noon.  The three-dish poles, above, are common in towns across the country, and signal an accelerating ascending tone, rather than the undulating wail used in the US.

What’s not clear is what to do here in response. When water comes, we head to high ground, but, well, there isn’t any here. The highest point, Drielandenpunt, is 20 km away and 300 meters up.  A colleague said to head to the basement, not a good flood strategy.  A friend tells me that the authoritative direction is to go home, close windows and doors, and turn on the TV or radio for further instructions.  Sensible, but I may also mark the location of the nearest sightseeing boat as my ark.

Posted by Dave Hampton at 7:33 PM No comments: Links to this post

posted on my office wall by the prior tenant.

Posted by Dave Hampton at 8:31 PM 3 comments: Links to this post 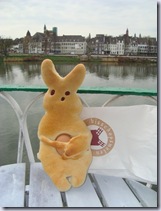 Easter morning was overcast and sunny; I ate the ears off of a locally baked bunny-bread and tried out Gordon Ramsey’s recipe for the perfect scrambled egg.  It’s an intriguing demonstration and works pretty easily.  In the end, it’s a bit runny by American standards, but yields a very tasty and celebratory breakfast.. You can learn how Gordon does it, and remember, creme freshe is sour cream. (Thanks to LifeHacker for the pointer)

With a rare three day weekend at hand, a group of us decided to do some early-spring kayaking in the Ardennes.  The Internet suggested going to La Roche-en-Ardenne, a town about 40 minutes south of Liege known as a jumping-off point for outdoor sports in the area.

La Roche has the feel of a frontier town, construction everywhere, muddy streets, people bustling up and down crowded sidewalks filled with ATV’s, kayaks, and hunting equipment for rent.  We stopped in at a local shop named for the local river, the Ourthe,  and were quickly assigned to a van headed 10 km up-river. Single-kayaks were 12 euro, lunch was an extra 2 euro (we passed).

Within half an hour, we were at the riverhead, kayak and paddle in hand, and the river rushing clear and broad in front of us.  There were fish jumping, the early spring foliage was just starting to make an appearance; it was quiet except for a sigh of wind.

It’s a wonderful river to enjoy, placid in spots, rippled with easy rapids in others.  There is one major drop of about a foot (right, above) that takes a moment’s nerve to ride, but, despite the fearsome appearance, it’s a welcome accent to a perfect day on the water.

Posted by Dave Hampton at 4:45 PM No comments: Links to this post