Tweets from the Netherlands

‘back in the Netherlands after a busy and fruitful week in the US.  These trips will come to an end this month as my voluntary separation from the company takes effect on the 31st, but it’s been a good opportunity to make a round of friends, colleagues, and projects, bringing everything to a soft landing.

I'm wondering what it means to have an artists' temperament? Creativity and passion, good, but arrogance and obsessiveness too?

Twitter is free Broadcast SMS: 140 characters that go to a list of followers, and you receive the postings of those you follow.  It’s been just over a month since I took the Twitter challenge: a friend of mine in the UK said that he had ‘figured it out’, and it was time for me to get on board.   I am drhamptn: I currently follow 22, am followed by 36, and wanted to share a few thoughts on the whole experience.

As a contributor, I’ve emulated the most interesting Twitterers that I follow, people who share daily flashes of insight.  So, unlike Facebook Status where I say what I’m doing, Twitter has become a way to share what I’m thinking.  I try to put down a good thought or intriguing observation a couple of times a day; I haven’t found the limited format to be a big constraint.

There's a fine line between wisely "keeping options open" and cynically "playing the angles": too many people can't tell the difference.

It’s interesting that I pick up a follower or two after each tweet.  They are seldom people I know; I initially tried to edit off strangers, but understand that hanger’s on are okay and don’t create an obligation to follow in return.  About half the people that I follow are friends: some post announcements or links, others the minutia of everyday life, all make for good reading.  In contrast, the corporate sites are bad: I got spammed with hourly announcements from Seattle Mariners Baseball, and don’t necessarily need to know that the No Agenda podcast is being recorded NOW for distribution LATER.

Tweets have a narrative flow  absent in blogs or status updates: a good example is the ongoing story of one friend’s travails building his new guitar.  News tends to break faster on Twitter: it was my first source for alerting me to the incident in Apeldoorn on Queen’s Day.  I’ve also enjoyed the links to pictures broadcast by classmates vacationing in Australia.  But interactions have been rare: Replies and message exchanges are much more common on other sites.

I'm at a loss on how to control distribution of @replies in my twitter feeds. Dreadfully annoying; happens everywhere-suggestions welcomed.

The technical curve has been steeper than I expected.  The TweetDeck reader is poorly documented and counter-intuitive: I’m happier with the Twitter aggregator widget in NetVibes. The distinction between @-public replies and D-direct messages escaped me and led to some embarrassing early mistakes. I did do some satisfying programming into the Twitter API, and successfully got code running against my blog and through FriendFeed onto Facebook.

Still, what is Twitter good for?  Although I’ll continue to experiment with it and do daily posts, I’m not sure that it fills a niche for me.  I have more friends and get more social interaction through Status updates on Facebook; if I want to think something through, I do it in the blog.

I like what my professional and consulting friends do with tweets to keep clients informed and updated.  But, for a personal link to friends, Twitter, like Second Life, won’t evolve into my preferred avenue for social networking.

And my friends assure me that I do, indeed, have an artist’s temperament.

Posted by Dave Hampton at 8:21 PM No comments: Links to this post

Accommodation between boats and bridges

Busy day here in the US: headed back to the Netherlands tomorrow.  Among the many things to miss back in the Old Country are the endless opportunities to watch the

My favorite boat passing by weekly is a handsome Swiss sightseeing cruiser. sleek black and white, that docks overnight across the river.  The captain can spin it effortlessly when he has to reverse direction, and retract the mast and wheelhouse when he goes under the Stone Bridge.

The difficulty is in seeing where to go once the wheelhouse is retracted into the deck.  Fortunately, that is solved with Swiss efficiency as well, although it’s a fun seeing the little head popped up through the hatch against the huge boat. 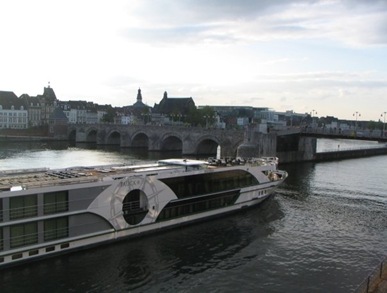 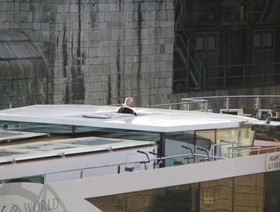 Posted by Dave Hampton at 8:59 PM No comments: Links to this post

‘Before and After’ meme for expats

Isabella has posted a meme for expats to consider: I have a few hours before the plane today, so it’s a good opportunity to pause and reflect on her questions.

Email ThisBlogThis!Share to TwitterShare to FacebookShare to Pinterest
Labels: Meme

Bits and Bobbing across the pond 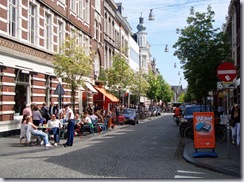 I’m back on the road for a few days: the weather and street life are getting delightful back in the Wyck.  While clearing up to-do notes, I came across a bunch of links and notes that I had been saving to share here.  I’ll turn this over to a day of miscellany, then...

* A friend sent me a link to a recent New York Times magazine  feature, an in-depth article by Russell Shorto about what it’s like to live as an American expatriate in the Netherlands.  It’s wonderful reading and highly recommended: his thoughts on the uniquely Dutch blend of capitalist and socialist economic models is particularly good.

…but no reflections on bitterballen?

* Transatlantic flights are good for catching up with current movies.  I really enjoyed Frost / Nixon, although I keep seeing the actor playing David Frost as better suited to his prior role as Tony Blair in The Queen. Clint Eastwood’s Gran Torino has a  growling, misogynistic charm that I feel somewhat guilty for enjoying.  The Day the Earth Stood Still and Marley & Me are unwatchable; Caddyshack  doesn’t hold up well across the years.

Eventually, I go back to reading magazines and typing business plans.  and sleeping…

A can of self-defense pepper spray says it may
irritate the eyes, while a bathroom heater says it's
not to be used in bathrooms. I collect warnings
the way I used to collect philosophy quotes.

* The Economist noted that the unemployment rate for men has been rising faster than for women during this downturn. In part, it mirrors the types of jobs that men and women predominantly fill, but the end result may be that a higher percentage of women will be employed than men for the first time in US history.

It got me wondering “What are men good for?” if women become the dominant demographic in both the home and the workplace.

Posted by Dave Hampton at 1:04 PM No comments: Links to this post