A couple of art notes 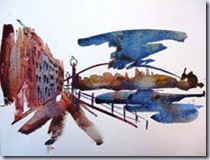 Our local Antiquarian Bookstore, de Bovenste Plank (The Highest Shelf) is hosting an art sale by Brigit Viegen, a local watercolourst.  Brigit does some very evocative pen and wash works of villages and people throughout the area: you can see examples of her work at her website here.

I really like the depiction of the Maas from Stenenwal lane, above: you can compare the view of the arcing Hoge Brug to the reality. 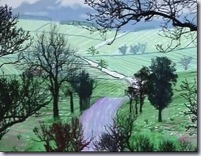 And British painter David Hockney is having an exhibition of his recent landscapes at the Kunsthalle Wuerth, a gallery in Schwabisch Hall southeast of Frankfurt, Germany.  The exhibit of over 70 landscape works and will be showing through late September.

BBC One recently aired a related episode of Imagine featuring Hockney’s return to Yorkshire and to plein air painting, showing the creation of the works.

He’s 70ish, but has the ideas and enthusiasm of someone half his age: I hope to retain the same creativity and energy over a lifespan.  The scene at the upper left, Green Valley, that demonstrates his characteristic style, home after years in Los Angeles. The scene right is an example of his recent experiments superimposing photographs of trees over painted landscapes.  It’s fascinating to watch him work to get the colours of fields and skies correct, and the way that tree branches flow from his brush, running commentary on art and life all the while.

“This curmudgeonly Yorkshireman is going to slosh on the paint till he drops,” comments Michael Glover at The Independent.  There are worse ways to live.

Posted by Dave Hampton at 1:08 PM No comments: Links to this post

And I thought it was all CGI and tilting floors…

While working on searches for a patent landscape, I was surprised to find that the US Patent and Trademark office is having a memorial exhibition of Michael Jackson’s patents and trademarks. Believe it or not, MJ actually has issued a 1993 patent, #5255452: Method and means for creating anti-gravity illusion.

Prior Art: Music entertainers and dancers are constantly searching for new and interesting elements which can be incorporated into their musical and dance performances. In the past, a professional entertainer, one of the inventors herein, has incorporated dance steps in his recorded video performances, wherein he and other dancers would lean forward beyond their center of gravity, thereby creating an impressive visual effect. This effect was accomplished by the use of cables connecting a harness around the dancer's waist with hooks on a stage, thereby allowing the dancer to lean forward at the required degree. However, since this requires stagehands to connect and then disconnect the cables, it has not been possible to use this system in live performances. Moreover, the cables obviously restricted arm and body movements. The present invention overcomes prior deficiencies of the previously employed cable system.

To see it, go here and type in the patent number. 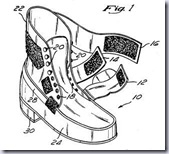 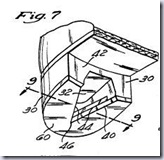 Posted by Dave Hampton at 5:32 PM No comments: Links to this post 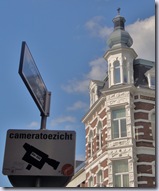 The Dutch Constitution was written in 1815, establishing the constitutional monarchy, then amended in 1848 to establish a parliamentary monarchy.  In 1983, the constitution was almost entirely rewritten, incorporating 21 articles of fundamental human rights among many other changes.  The current 2005 charter (English or Dutch) is surprisingly compact and efficient: there is no preamble stating principal or intent.  In typical Dutch style, it just plunges into the practicality of governance.

Unlike the US constitution, the Dutch charter carries an explicit privacy provision in Article 10:  “Everyone shall have the right to respect for his privacy…(Parliament will establish) rules to protect privacy (and) rules concerning the rights of persons to be informed of data recorded concerning them, and of their use, and to have such data corrected.”  It’s enlightened and far-reaching for our post 9/11 electronic age, and, walking through the Wyck, I wondered how it worked in practice. 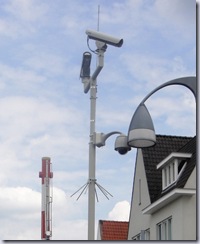 As in the US and UK, the Dutch make extensive use of CCTV cameras to monitor public spaces.  A typical installation contains several cameras and microphones, along with transmitters and protective shields and spikes to keep people from climbing the poles.

Placement of cameras must be authorized by the municipal council (gemeenteraad), and are operated under control of the mayor assisted by the police.  Surveillance is authorized only for a specific purpose to prevent defined crimes or behaviors, and are approved only after less intrusive measures have been considered.  Citizens can make a complaint about unsuitable surveillance  to the local council and, by civil writ, to a court.

It’s an interesting effort to strike a balance between privacy and security, and explains the presence of notification signs along the streets (but, curiously, not near the cameras).  For more information, the best summary is at Privacy International.

“Since 2004, the use of covert video surveillance in public places requires notice. The Hidden Camera Surveillance Act 2003 (Heimelijk Cameratoezicht) makes it unlawful to use hidden cameras in public places without notification. The use of hidden cameras in the workplace remains lawful if there is a suspicion of criminal behavior and if workers are notified of the likelihood of video surveillance. Journalists can still use hidden cameras for their work. In April 2005, the House of Representatives passed the Camera Surveillance Act, which enables the retention of images up to four weeks and also facilitates the use of cameras for law enforcement purposes, whereas before the main purpose of camera surveillance was keeping public order.”

Posted by Dave Hampton at 11:35 AM No comments: Links to this post

Newsweek tallied the accuracy of predictions made in their 2007 State of the World report, The New Power Brokers, and cites how, in almost every instance, they got the future dead wrong.  Unfortunately, their updated 2009 report is likely to have the same accuracy because they commit the same errors: assuming that trends of the recent past predict events in the near future.

Why should we care?

McKinsey’s theories and data are enormously influential across upper management.  I have seen a groupthink tendency across Forbes 500 executives and aspirants: they follow a uniform set of  journals, conferences, books, and gurus.  Advice from McKinsey carries disproportionate weight in this circle, heavily influencing thinking and behaviors: if McKinsey is wrong, there’s a greater chance that C-level thought and actions will be wrong.

McKinsey is also called to help ratify decisions as well as to create them.  A CEO who wants to implement change will use McKinsey to give objectivity for their strategy and legitimacy to their plan.  McKinsey’s analysts will, in turn, draw on the firm’s data and predictions to support their recommendations.  A poorly rationalized decision, undermines the company’s leadership, diminishing trust and motivation among employees.

I interviewed with McKinsey several years ago, where I was honestly told that they wanted to hire associates with no experience, people who could simply be trained in the firm’s practices.  They were seeking (and this is a direct quote) “the men you want to be and the women you want to be with” as figureheads to work with their clients.   I was amazed by the shallowness of the pitch and the arrogant assertion  that real-world experience only got in the way of their jobs.

In light of my personal experience, I am not surprised that they got things wrong, yet they remain highly respected and widely listened to.  And, as we think about how to (re) build strong companies, this is a problem.

It seems to me that companies must commit to seeking out genuine expertise and experience when they look for advice.  They need to critically assess the performance of their gurus based on evidence rather than on cachet.

They need to find a different Way.