Happy moments on the road

I’m back in the US, motoring across the Northwest towards a family reunion in Wyoming.   Beautiful, hot, sunny weather, open roads, miles humming by, conversational catch-up. 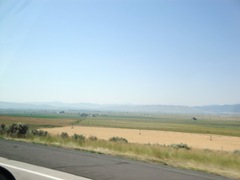 Discovering that, for the first time, I qualify for the Senior’s Menu choices at Denny’s and AJ’s.  Despite being pressured by my daughter, I resist the discount and order real food, in adult portions.

Roadside diners (and the daughter) 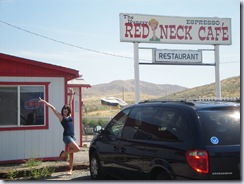 Time to catch up with Excess Baggage on BBC4, listening to North American correspondent Jim Webb marveling about how empty the United States is once you leave the coasts.  And, looking across the dry expanse of desert and tumbleweed, thinking of corresponding Netherlands flatness, it really is unpopulated by comparison.

…and teasing an idle thought for 100 miles: is it better to spend time with someone well-traveled, well-read, well connected, or well-bred?  After 158 miles, I conclude “well-travelled”.

and of course, there’s  a bit of Dutch almost anywhere you look…even in La Grande, Oregon or Coulter BayVillage, Wyoming. 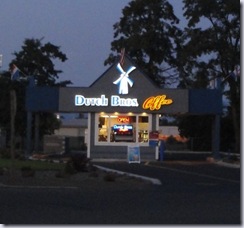 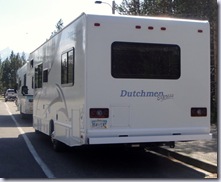 Posted by Dave Hampton at 6:58 PM No comments: Links to this post

I have to admit from the start that I’m no fan of Jim Collins.

Mr. Collins is a top management advisor and the best-selling author of Good To Great, telling companies how to make the transition to high performance profitability, innovation, and growth.  I always thought that his “over-the-shoulder analysis”, conducted by his graduate students ,was under-informed by real-world experience and missed important nuances that were driving successful cases.  Bob Sutton also has a good critique.

I’ve worked for several firms that were infatuated with his principals, but have found that they are very hard on people.  His maxim that you move people into their proper seats on the bus (or get them off the bus) as a prerequisite to anything else has led to people being shunted aside and dismissed, rather than constructively included project planning and execution. Jack Welch’s rule, that it’s better to hire the skills you need than to train those without them, is similarly awful to experience.

In my own life, I work to find a good blend of task timing and balance to make my days ever-more productive and happy. Thus, I was interested (with a bit of dread) to get Mr. Collins’ most recent thoughts on Time Management, reported recently in the New York Times.

On the work-side, I am putting half of my time into contract fulfillment: committing billable hours, regularly, to client projects that progress towards deadlines and pay the bills.  These generally have to be done across contiguous uninterrupted hours that let me gather thoughts into a structure and work with them.  It’s a way to achieve a “flow state”: best on generalized conceptual thinking and planning early in the day, and on specific data analysis and documentation later.  I also need to accommodate the likelihood of meetings in the early evening to match US working times.

I reserve the other half of my time for establishing  the business: creating structures, building the band, prospecting clients, self-education.  At the moment, that’s tending more towards pushing through the incorporation and residency processes and sounding out colleagues about their plans.  In the future, I‘d like to get an hour’s time for study, reflection, and writing built into my mornings.

To get a better work / life balance, I think back to when I used to work a 10 hour /4 day schedule when I worked for Physio-Control under Eli Lilly, and always found that to be much more congenial than five-eights.  The three day weekends left time for leisure and housework, while the longer working day allowed more uninterrupted time for following a task through.

Mr. Collins has made similar top-down commitments to managing his time better.  He defines three broad buckets (and goals), Creative work (50%), Teaching work (30%), and Everything else (20%).  He keeps three stopwatches in his pocket, and turns them on and off as he switches tasks throughout the day, tracking his trends in a spreadsheet.  He keeps a sleep log that he’s been able to use to find his minimum necessary sleep duration.

It’s all a very data-driven, objectified process that yields patterns and trends, but I don’t think gives a lot of insight.  I think that we learn from guessing and anticipating, then experimenting and observing: along the lines of the cognitive model in Hawkin’s  On Intelligence.

While I know that I want to contain my work to 40 hours, and divide it roughly into two buckets, I’m taking that as a hypothesis, not an ideal.  I expect to learn the tasks, times, styles, and breakpoints that work best as I go along.

I also recognize that work is a collaborative activity.  If I want to work with insightful, creative people, my schedule may need to bend to theirs (and vice versa).

Finally, time is only one resource that has to be managed in life, and it’s not independent of all the rest.  Am I better spending less money on a train ride where I can think but not write, or take a more expensive plane that yields working hours from the time saved?

As with “Good to Great”. this feels so divorced from people and from life that it no longer succeeds for me as a prescription.

Posted by Dave Hampton at 11:58 AM No comments: Links to this post

Cutting the wood in Itteren 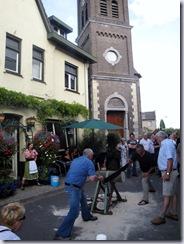 Out for a Sunday drive with friends, we came across a street festival in the village of Itteren, flush against the Belgian border north of Maastricht.m  These are common across the Netherlands in summer, a chance to drink beer, listen to music, and enjoy the sunshine.

In this case, the center of attraction was a stout oak log mounted on a trestle outside the main tavern.  For a small chartable donation, brawny contenders could take the return at a cross-cut saw, slicing off a round from the end of the log.  Best time gets a silver trophy; worst gains a scarecrow.

Being from the Land of Tall Trees in the Pacific Northwest,  felt a kinship with the competition, and the barker offered a half price go since  had only one good leg.  Being an American, unusual in the area, was icing on the cake.

My friend Will and  took our positions and they set a groove to start the cut.    took a full-frontal stance to keep my weight off the recovering leg, which lost me both leverage and balance, the saw immediately popped free with the first push.  The referee, put a firm hand on top, holding it n place as we started to cut down through the log.

It’s  harder than it looks.  Much. 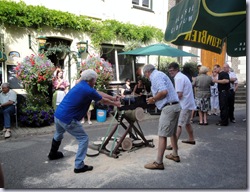 First, there was the problem of the saw curling with each push. The answer, suggested by the woman with the microphone, was to only pull.  Things improved immediately.

slowly through the log.  One minute.  Will and  tried to rock the blade a bit, pulling down and through.  Sawdust flew, I think we were at the center of the log.

Two minutes.  The exertion is causing my stance to decay.  Still, the chord of the log shrank with every cut.  Progress became quicker, the round wobbled.  The woman suggested that rest breaks were allowed; we redoubled. 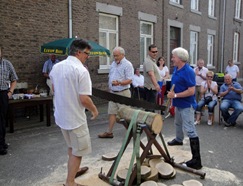 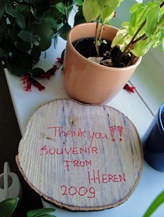 Finally, a last heave, and the round popped off: 2:59.  We broke the three-minute mark, at least, securing a second-to-last finish (someone else scored a 3:14). The winner was about 50 seconds: I was awarded a specially signed round and we took a beer into the shade to watch how it’s really done.

I think, in fact, I see the stance, the angle, the technique.