While replying to comments on the blog today, I realized that I had logged 499 entries: this one is number 500.

I don’t usually mark milestones, but this seems like a wonderful opportunity pause and to thank you, my readers, for your interest and for your comments.  I have learned a lot through the writing and the replies, and have genuinely appreciated getting your thoughts and counsel.

I enjoy reading the blogs that many of you maintain as well, and I do look forward to exchanging further ideas, adventures, and essays for many years to come.

Posted by Dave Hampton at 9:57 PM 7 comments: Links to this post

Riding the waves to England (or France) 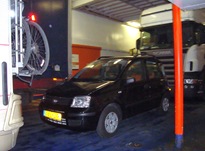 As my teaching and research work in Cambridge starts to gather speed, I’m finding that I need to be in the UK much more regularly.  I don’t plan to leave the Netherlands, so I needed to figure out how to deal more effectively with the travel.  The customary approach was to book a Ryanair (Eindhoven) or EasyJet (Amsterdam) flight to Stansted, take the train up to Cambridge and in to London, and walk or take taxi’s around town.

Costs add up quickly: at least 100 euro for air fare, 35 euro for the Dutch train and bus, 50 euro per day for the UK trains, 15 euro for each taxi ride, not to mention the time spent in airports.  So I’ve started scouting for alternatives, and, while the Chunnel is prohibitively expensive, the car ferries are looking pretty nice.

I can rent a little car for 32 euro per day, hop on the ferry for around 50 euro round trip, pay 35 euro every couple of days to refill the car, and have a lot more flexibility at the other end of the trip.  Sure, it’s a Fiat Panda (or equivalent) but it goes anywhere I want, when I need to.

There are two main ferry routes from the Continent to the UK: one set leaving Dunkerque every two hours, the other leaving Calais every hour and a half.  Both dock in Dover, about two hours from Cambridge and a bit less to central London.  The drive from Maastricht is pretty similar: a couple of hours to Dunkerque and a half-hour further to Calais.  On a good day, I can make the run in six hours, which compares favorably to the airline alternative. 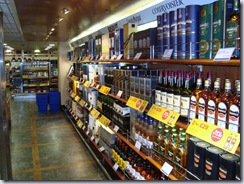 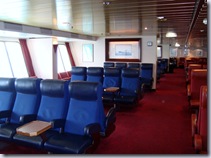 The ferries themselves are very nice (and, coming from Seattle, I’m used to the superb Washington State Ferry system) and have kept reliable schedules.  I book on-line, which speeds up boarding somewhat and gives you some grace on timing: if I miss the boat or show up early, I get priority for an alternative.  It’s worth doing a quick search for promotional codes that can save about 20% on standard fares.

The P&O ships seem marginally newer and nicer than the NorfolkLine ferries: I haven’t tried the StenaLine, SeaFrance,  or high-speed hovercraft alternatives.  Direct Ferries is a good booking source if you don’t have a preference, as it clears all of the lines, but I would still try a direct booking on the line’s site to assure the best price (just like with a hotel booking).

Passport screening entering the docks is slow and difficult (isn’t it everywhere?) but things get comfortable once on-board.  The lounge spaces are comfortable and the duty-free shop is nice, although I wish they had a WiFi connection and some windows at both ends of the ship.  Outside and upper deck access is pretty limited, but given the gale winds and rain recently, I don’t miss it.

Posted by Dave Hampton at 6:02 PM No comments: Links to this post 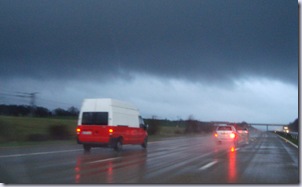 I’ve been in the UK for the past few days, organizing the tasks, contracts, and schedules for the research project which is being funded by the East of England Development Agency (EEDA).  It was a good visit, the people involved are enthusiastic, capable, and willing to help, and it will be fun to finally get the key experiments underway.

We also made a major re-organization of the business to rebalance responsibilities and shareholdings to better reflect the contributions of the people involved.  That makes for some hard discussions with people who have moved on to new projects, but it’s important to get the core team working together and fairly compensated for their efforts.

But it rained like I have never seen it rain.

For my London meetings, I parked in Greenwich and took the train into the city: cheap parking, very nice Electrostar rail cars from Southeastern, and frequent, inexpensive service to Waterloo station.  The rains just pelted the platforms, though, and made walking across the city a miserable dash through flooded walkways and dodging sprays from cars.  Cambridge was both rainy and frigid: my car was coated with ice each morning from layers of frozen rain.

The worst was trying to get back to Dover for the Calais ferry.  Bands of very low black clouds spiraled over the M20, flooding the expressway (all the worse for my driving a Fiat Panda, which held the road well despite being small enough to fit in a pantry).  A comfortable travel margin quickly dwindled as traffic thickened and slowed.  The TomTom went a bit nuts, pushing me off at Folkstone to take the train through the Chunnel instead of the ferry across the Channel.  I arrived at the Dover docks ten minutes past the closing for boarding, only to be diverted into the “Special Inspection” garage, where agents armed with flashlights inspected the engine, undercarriage, and boot.

I would say it never rains, but it pours.

In this case, though, the weather delayed the ferry by 20 minutes, so I got waved on-board and delivered back to France without missing the connection.  And the weather seemed to lighten as soon as I was out from Britain, nowhere near the same rain, wind, and clouds along Belgium or the Netherlands.

Posted by Dave Hampton at 2:11 PM No comments: Links to this post

What do you do with a missing church steeple? 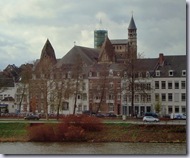 The steeple of Maastricht’s  main Catholic church (Basiliek van Onze Lieve Vrouw  "Sterre der Zee" Maastricht ) is undergoing renovation.  It was plucked off somehow a month ago, I didn’t see whether they dismantled it or lifted it off by crane or helicopter.  It’s left the church looking a bit lopsided and forlorn at the holidays.

But the Church Fathers have rectified the problem, and just in time for Christmas. 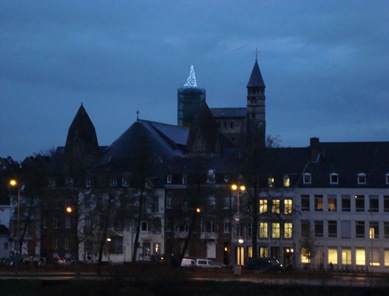 The Dutch are still a delight sometimes…

Posted by Dave Hampton at 2:12 PM No comments: Links to this post 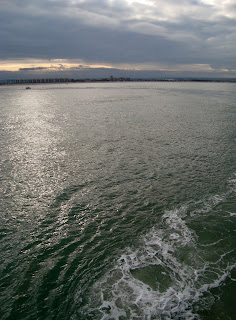 'Slow progress continues towards the submission of my Tier 1 Visa application: I met with the immigration consultants in London and we reviewed the whole package.

On the good side, the content is coming together well. I have all of the documentation except the testimonials from my accountant about my salary and business, and I should be able to secure that by next week. There are some online applications that need to be filled in, one with general background information and another about my links to terrorist organizations and my criminal history. Fortunately, I have a clean conscience on both scores.

On the bad side, the submission process surrounding the application is going to be a challenge.


If I submit through the High Commissioner in the Netherlands, I have to give them my passport for the duration of the application processing, four to six weeks, minimum. That means that I can't travel to the US, or even to Great Britain, for over a month. I'm teaching a course at Cambridge through the winter, so that's a non-starter.


Fortunately, there is another process, available only to US citizens, that allows me to submit through the UK embassy in LA, Chicago, or New York. Once received, they will process the application in one day. One day! Why would I ever submit in the Netherlands? Well, in part because you need to have a local address to get jurisdiction for the application assigned to one of those three offices. Do you have a home in Chicago? *eep* Relatives, parents… <sigh>


I think I've worked it out, but it really is always something… I am getting close, though.
Posted by Dave Hampton at 11:31 AM 2 comments: Links to this post