Arrived at London Heathrow: a pretty efficient trip in from Cambridge this morning to catch the plane to Denver.

I was exhorting the class to learn from their own experiences and those of others, noting how long things take and their own style of working.  Ideally, they should find how to make good task estimates and make better use of their time (I avoid ‘efficiency’, striving instead for a bit of humanity).  While I still struggle with estimating job resources myself,  I am at least getting pretty good at anticipating travel routes and times. 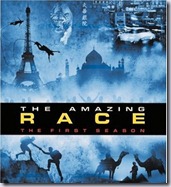 In the beginning, I was pretty much like the American reality show “The Amazing Race”, scrambling from waypoint to waypoint and figuring things out as I went. There wasn’t much time for seeing things or for meeting people, but, in the end, things always seemed to work out.

It just wasn’t pretty to watch. 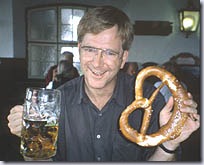 Today I’m pretty much Rick Steves, an American travel writer who focuses on European travel.  I know the ropes, how to do things, and where to find the good restaurants and shops.  I know people all over and am comfortable on trains and busses (even, occasionally, on bicycles).

I have become pretty to watch.  And I can reliably get from Cambridge to Heathrow on-time and at minimum cost. 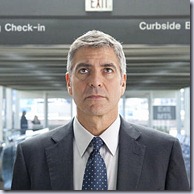 I don’t want to become Ryan Bingham, George Clooney’s character in “Up in the Air”.  There have been endless articles about his philosophical road-weariness, the empty lifestyle (an apartment decorated like a hotel room, with travel miniature portions in the ‘fridge and the bathroom), and the fact that his most meaningful relationships are the loyalty greetings that he gets from his airline and hotel partners.

Once again, it wouldn’t be pretty.

Posted by Dave Hampton at 2:15 PM No comments: 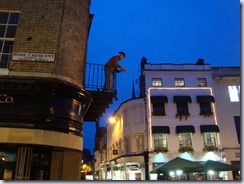 It’s always good to return to Cambridge: the city and the people are special to me and it’s a feeling of coming home to wander familiar streets and shops.

There’s a bit of ritual to a visit.  English breakfasts in the dining hall at the College, seated at long tables and striking up a conversation with whoever happens to be sitting nearby.  This morning it was a materials scientist creating nanotubes for industrial coatings, yesterday a Polish businessman studying organizational theory.  And all before 9 am. 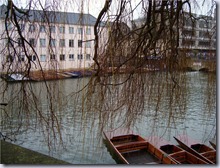 Last night I went to the Peterhouse Political Society for a lecture.  They hold it in the college parlor, all flowered wallpaper and wingtipped leather chairs, the inner circle reserved for the dons (who invariably fall asleep during the talk).  Sir Hilary Synnott, the British High Commissioner to Pakistan in the early 2000’s , was speaking on “How did it come to this?” to a roomful of Pakistani students wanting to debate his policies and perceptions.  Worth a walk in the rain just to watch the give and take.

I stopped through the University bookstore to browse the sections of Philosophy and Mathematics.  I was hoping to find an introduction to recent philosophical thought, but no luck; I did find a good book on Pattern Recognition and retreated to a pub across the Fens for a read over a beef casserole.

“How many Nobel Prize winners do they have over in Maastricht?”, a local friend asked with typical British irony when I told him where I was living.  I love the Dutch, and I don’t think I’d want to live anywhere else in Britain,  But when I’m visiting Cambridge, it’s hard not to be seduced.

Stepping into the classroom

I’m back in Cambridge (UK) for a few days, delivering a lecture and catching up with the students in the Medical Devices and Diagnostics course that I’m co-administering.  It’s nice to be back to the University again, enjoying the conversations with people and the ambience of the institution.

As I’ve gone through the process of starting my business, I’ve often commented “Wow, that was harder than I thought” or “Who’d have thought” when confronted with some vagary of the banking or regulatory system.  I finally proposed to distill the ‘life’s lessons learned’ into an informal fireside chat for interested students, and it’s been fun organizing the past couple of years into some reflections and recommendations.

I was fortunate to have made just about every mistake possible in getting the first, UK-based company going, making me much more sensitive to doing things right when I started the Dutch BV.  Getting the right professionals engaged from the start, getting the structure right before I started driving the business forward, being adequately capitalized, focusing on cash-flow, keeping the plan flexible,  have all been important factors in the (preliminary) success of the 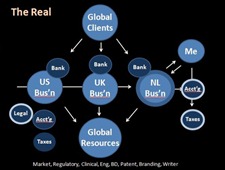 We talked about the challenges of running a single-person corporation with footprints in three countries, of  contracting and charging for services, and of the tradeoffs between building the core business and generating cash through consulting and contracting.

It was a good discussion, and the questions and experiences of others helped to put my own comments into good perspective.  This is where I think that there is so much value in teaching: if forces me to go back over the basics, to distill my experiences, and to find different ways of solving familiar problems.

And I do love preparing and presenting slides Saachi-style: fewer slides with bolder lettering and high-contrast black-backgrounds)

Perils of the morning commute

It was probably inevitable, but I had my first bicycle spill this morning.

It was a slushy day, packed snow and patches of wet ice that didn’t seem particularly slick.  I was bouncing along the cobblestones along a side street when I reached across to move my recycling bag from one hand to the other, and suddenly the back wheel canted the opposite direction.  The whole bike slewed, I went over the handlebar, and we both went hard onto the street.  Landing full on the chest, it knocked the wind out of me, yielding have a palm full of pavement stones, some bruised knuckles, and a very skinned knee.

It brought to mind all of the perils of the typical Dutch morning commute:

Scraping ice off of the vehicle (I hate wet pants on a cold day). 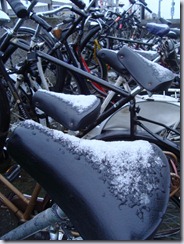 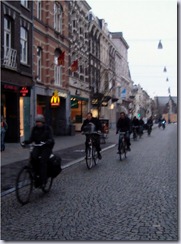 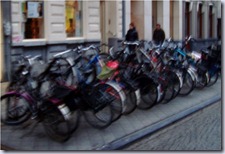 Being out before the road sweepers have cleared the snow: 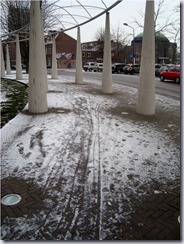 Congestion at the intersections: 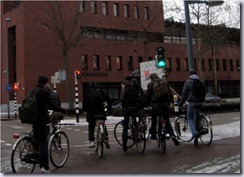 Deciding who has the right of way: 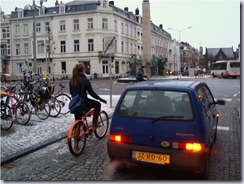 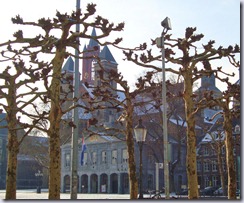 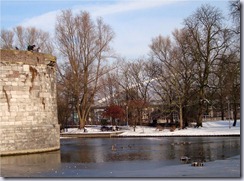 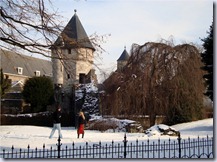 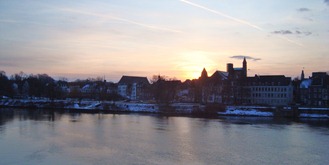