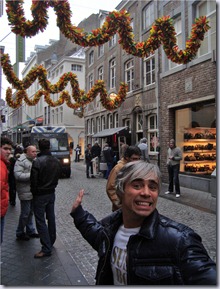 Carnivale takes off this weekend; the efffigy of the farmer’s wife will be raised tomorrow noon in the Vrijthof Square signaling the beginning of the celebration.  Bands are marching over the icy stone bridge every hour, brass-bleats and drum-thumps through the clear cold air.

I was taking pictures of the decorations and one reveler jumped in front for a quick pose.  Behind him, a police van rounds the corner with four youth already arrested for disorderly conduct (a bit after noon).

The decorations are up, the children are out, the costumes are appearing, the bier and oliebollen stands are set up along the streets and in the squares.  It should be a fun party. 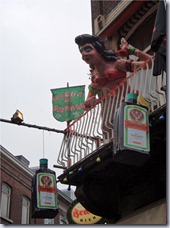 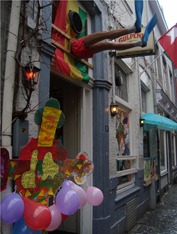 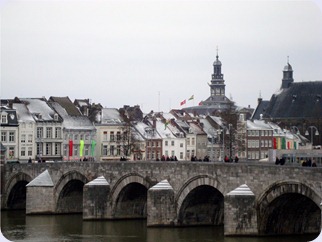 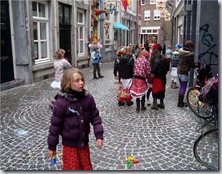 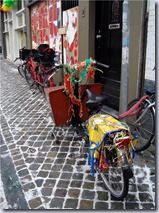 Posted by Dave Hampton at 4:23 PM 2 comments: Links to this post

Email ThisBlogThis!Share to TwitterShare to FacebookShare to Pinterest
Labels: Everyday life in the Netherlands, Holidays and Events

Back to the Great White North 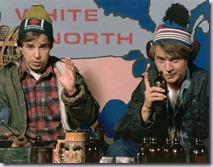 ‘made it back to Maastricht, and wow is it *cold*.  And snowy.  And grey. It makes me wonder if I took a left passing through Atlanta rather than progressing on across the Atlantic as intended.  I half expect to find the McKenzie brothers stocking up on Molson at the AH.

The trip back was uneventful; planes were largely on time despite the weather worries, and, since the flights were empty, I got more sleep than expected.  The Dutch were short of trains on arrival so the Intercity from Utrecht to Maastricht was a standing-room-only local pressed into service at rush hour.  A Dutch friend tells me that NS has problems with over 70% of their trains, so it’s not surprising that some go out of service when it gets wintery. 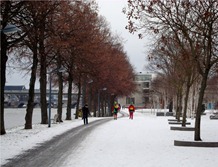 The cold feels biting, even through winter clothes; fingers get numb in a minutes without gloves on the bike and the streets are largely deserted.  A bit of Bob and Doug’s brew would be welcome.


And, fortunately, there’s exactly that respite beginning all around town. 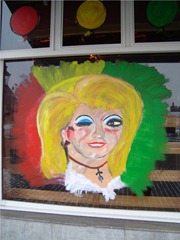 Posted by Dave Hampton at 1:07 PM No comments: Links to this post

The snow intensified last night as the storm flowed in from the prairies west of Chicago. Our hotel staff was buried in a wave of calls cancelling rooms because their planes to O’Hare were grounded, followed by a second wave of calls requesting rooms because flights out were being cancelled. “It all balances out,” sighed the clerk, four lines on hold.

I retire to the attached restaurant with Stieg Larsson’s new novel and a loose pile of notes from the day’s meetings.  Single, I earn a small table in a corner, no room to spread out and write. The television over the bar alternates between frantic snow coverage and frantic political coverage: the clear English hard to ignore. 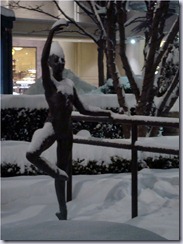 The waitress arrives to tick off the day’s specials, staring into space. Her listless prosody is nonetheless fascinating just for being linguistically and culturally comprehensible. I order a slab of beef and scribble a quick note to myself to explore “language as melody”.   Above the bar, Sarah Palin asks how that “hope-y change-y thing is going” for us.  My stomach knots. Why is she so deeply irritating?  I pause to add a few words about cynical condescension to my note, then return to my reading.

The book veers from it’s narrative plot to a comment on Euclid’s discovery of a formula for predicting perfect numbers.   With great effort, the Pythagorean Greeks discovered four of these numbers: 6, 28, 496, and 8128. I wonder why people seem drawn to “magic numbers”?  Lucky numbers, betting odds, sports spreads, five-figure Dow thresholds.  Mine tend towards social numbers: Dunbar’s number of 150 friends in a neighborhood, the Pareto 80-20 rule for knowing when a task is completed, the 10-10 goal for introducing products  I’d advocated the latter just today: we need ten happy doctors enrolling ten patients each… It sounds big yet practical.

Dinner arrives, and I push the books and papers off onto a chair.  The news commentator giggles that Sarah Palin was actually reading notes off of the palm of her hand during the speech. Cameras have caught the words and show her consulting her hand during the Q&A.   Karma, indeed: how’s that speech-y thing going for ‘ya?   “Energy," “Tax” and “Lift American Spirits”; “Budget cuts” crossed out.  All worthy topics, but the news is all about the gaffe, not about the issues and ideas.

A comic recently argued that we’re increasingly living in Huxley’s dystopia.  We fail to take into account man’s almost infinite appetite for distractions.  Food, numbers, weather, Palin.  But it’s a snowy night after a busy day at a small table in a noisy restaurant.  In my defense, distractions are the drift of the evening, not it’s fabric.

Snow and planes and mp3 players

I’m staggering across the American Midwest this week, buffeted by successive waves of winter storms.  My entry via Minneapolis / Denver managed to avoid the storms that pounded Washington and Boston Friday.  From the perspective of Colorado, it was hard to understand what the fuss was all about; a foot or more routinely falls and people just cope.  It may have become a big story in part because it was an easy story: reporters just had to poke a camera out the front door and start talking.

A second storm hit Denver the morning I was leaving, promising a couple of feet in the mountains.  My flight to Cincinnati got off a half hour late after a thorough de-icing, arriving with 20 minutes to spare before my next flight.  Alas,, not enough time to lope from Concourse B to A, and the agent closed the gate as I rounded the corner.  “We close at 6 minutes; you arrived at 5”, she told me matter-of-factly, then offered me a hotel for $60 overnight until the next plane at 7 am.

Right, sorry, but Delta’s problems are not supposed to become my problems.  And once I’m stranded anyway, I’ve got nothing better to do than work for a better deal.  In this case, I was able to get a free hotel room, but failed to squeeze out a meal voucher or a room closer to the airport.  Clearly, 100,000 air miles flown in 2009 doesn’t carry the weight that it used to.

I was still cursing Delta for closing the gate in front of me too: there was a time that airlines held a plane a few minutes if people were trying to make tight connections.  Amazingly, my luggage did make the flight and arrived in Chicago long before I did.

Five hours sleep and back in the air: descending at sunrise into a misty Chicago frozen against Lake Michigan.  The Colorado storm hit Illinois this morning, closing both airports and making tomorrow’s flight to Atlanta, then London, problematic.

All along the way, airline and security personnel seem to be on a new vendetta against mp3 players.  Customs agents stopped me to ask me to remove the buds from my ears before joining a line to clear immigration.  A flight attendant asked me to remove a player from my coat pocket because she thought she heard sound coming from the earbuds (really, in my overcoat pocket?).

As delays ripple through the system and passengers pile up at airports, I suppose everyone is running a bit short-tempered.  But it’s probably the worst time to extricate people from their cocoons for some security-chat and random- rule-enforcement.

Posted by Dave Hampton at 8:08 PM 2 comments: Links to this post