Well, I tried anyway.  Four things I learned from the demo: Check your link before starting, ditto for making sure the phone is charged, it’s hard to type-text from the middle of an active event, and…

I picked up the 9:30 from Maastricht, surprisingly, the crowd thinned with each successive stop.  I thought we’d accrete revelers as we headed north: a friend texted “turn back while you still can!”

At AMS station – chaotic, windy, cold, and very orange, clusters of kids fanning out across the city. 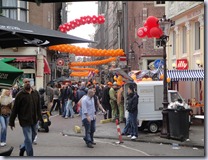 They swirled around the down towards the Red Light District.  Lets of hats, wigs, shirts, and horns for sale, balloons above the narrow streets, rain starting to fall.  Garbage everywhere: leftover from the warm-up party?  Strangely, though, the crowds thinned along the Oudezijds Achterburgwal; evidently the party was else where (or later).

Crowds all at Dam Square: drum bands and ferris wheels.  Lots of food, but no orange beer.

More tourists than revelers, more women than men.  Boys in Holland bathrobes chugging in unison; Japanese tourists asking Dutch teens to pose with them for pictures.  I wandered over to de Krijtberg, hoping for more people along the water. 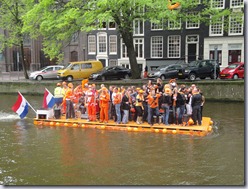 Absolutely the right place to go looking: A floating dance floor rounded the canal, followed by boats, barges, and more.

Sun is finally out along with the boats; people are uncovering their garage sales, nibbling delightful loempia.

The boats are the best part, multiplying by the hour.  All sizes, all shapes, all boozy, all orange. On one bridge, a girl sells water balloons to drop on them for 0.50.  Another dangles wooden shoes from a fishing pole and tries to tap people below.  Silly string is everywhere.

The intersections prove tricky, as boats pile into one another .  The crowd is delighted.  A tourist cruiser is hit three times trying to pass through; he guns the engine and almost swamps one rowboat.

Now things are starting to fill up; the rock music is starting and the crowds are surging.  There’s a pot haze mingled with a prosecco vibe. Most of the things for sale are cast-offs from families with grown children: books, toys, undersized clothes, porcelain knick-knacks.  No prices,  they might just be anxious for someone to take it away.  Restaurants are running most of the food stalls, ringing the kitchens out onto the sidewalks.

Now we’re there: the streets are filling, a concert has started on the Leidseplein. 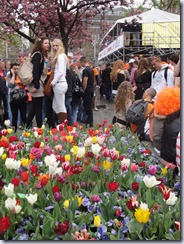 Rembrandt Square is absolutely packed: people overflow the streets and plazas.  Somehow, they avoid the tulip beds.  They dance on top of the tram shelters; they fill windows like my favorite Gigli photo (left) 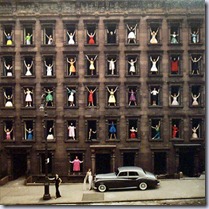 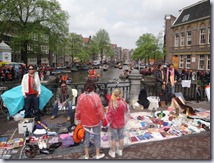 Time to head south, but every train is stopped into and out of AMS Centraal….

The track agent shook his head, “Kids forced the doors and ran out across the tracks.  Every train is stopped, we have to reset the whole system.  It will take at least two hours to fix.”  The only way out was the Metro (which I didn’t know was up and running) to the edge of town where trains were collecting. 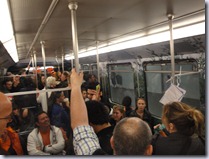 The only glitch was that the transitions baffled my OV-card, charging me about six extra euro for the inconvenience.

A very nice party, once it gets rolling – but never did find the orange food.

Posted by Dave Hampton at 10:08 AM 4 comments: Links to this post

A bunch of problems resolved today: apartments, lease car, business contracts, airline planning.  None of them were life-threatening, but all required diligence, flexibility, negotiation, and time.

Sometimes the process overwhelms the promise; things that should be easy are way too difficult and simple requests lead to inaccessible procedures.

It can get discouraging, and I wonder whether maybe expat living just sets up too many pointless artificial barriers.  Is it all worth it?

But today, riding my bike back along the river, feeling flush with my problems solved, there was no place I’d rather be.  The bustle of students, the terraced buildings, the steeples across the water, the trees in full bloom, the bicycles clattering by, the cafe’s lining the streets: This is still an amazing way to live. 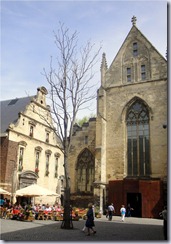 Six years ago, I walked away from a job that had peaked, looking for a more creative, fulfilling, balanced way to live.  “My private theory about midlife is that if you don't move forward, and also sort of at least semi-correct wrong paths, expired ways, do some of what you secretly wanted to do, you get weird and bitter,” wrote a friend, remarking on her experiences.  A similar article in Wired reflected on the evolution that talented technical people experience through their lives,

Some are now rich, famous, and powerful, thriving in the transition from subculture to industry. Others, unwilling or unable to adapt to a world that had discovered and exploited their passion — or else just unlucky — toiled in obscurity and fought to stave off bitterness.

I think that we all make intentional choices, we work hard to make the most of them, and we learn from them, every day.

And the reward is that the life we lead as expats becomes remarkable.

Posted by Dave Hampton at 4:05 PM No comments: Links to this post 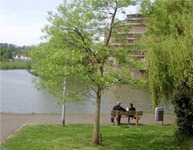 A surprising number of problems can be solved by having patience, being nice, and splitting the cost of getting what I really want. The process also teaches me the true value of what I’m asking for.

After watching the documentary “This is It”, I think Michael Jackson was amazingly talented and passionate about what he did. After watching “The September Issue”, I think that Anna Wintour is not.

Being popular is not the same as being better.

I am so glad that summer was waiting for me here when I stepped off the plane.

I wish that Robert James Waller, David Lodge, and Loreena McKennitt would do more writing again.

If Spotify is the European Alternative to iTunes, why can’t I sign up from most of Europe?

It’s becoming harder and harder for people to follow all of the moving parts in my life, and there just isn’t time to explain.  As a result, I am increasingly misinterpreted.

Many people seem to be distressingly comfortable with being ignorant. Few understand why they hold opinions on complex issues; they can only cite the opinions of other uninformed people.  Yet they don’t believe the people who know the most about a topic, and are proud of that populism.

Scooters should not be allowed on Dutch bike paths.  They’re too fast, too much, on the narrower lanes.  And, yes, I feel older for saying that.

Simple things should not be made difficult just because “There are rules.” Banks, realtors, car dealers in Europe have to do a better job of serving their customers.

The Dutch tend to dress above what Americans would wear for casual occasions.  They wear a button-shirt and slacks where I might wear a polo shirt and jeans.  It’s forced me to ‘up my game.

The MacArthur Fellowships are a great idea: Society has to have a mechanism for allowing talented people to do something that they care about doing, something that they want to do, and that people want them to create. Free market capitalism utterly fails at this.

There are few “game changers” in the technology marketplace. The iPhone and iPod were; the iPod Touch and iPad are not.

There is still something about the experience of reading a book that transcends the words and the fonts; eReaders have not captured that quality; I don’t know if they can.

Truth is found in quiet open places where the light and the wind fill my mind, and in late conversations over warm drinks amidst long-standing friends.

When I travel, I would rather spend money on a good dinner than a good hotel.

Posted by Dave Hampton at 3:29 PM No comments: Links to this post 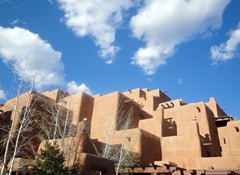 I drove from Albuquerque to Santa Fe across Highway 14 yesterday, avoiding the broad, straight runway of Interstate 25.  A cab driver suggested that the alternative route offered, maybe, ten minutes to the trip, but connected to villages, canyons, and passes that were much more typical of ‘real’ New Mexican landscapes.

It’s an amazing place.  The high-contrast saturated colors give a crystalline clarity to the high desert.  Towns are weathered and run-down, but decorated with whimsical art and wind-driven mobiles.  The fluted red and tan rocks are accented with metal sculptures in primary tones.  It’s quiet and still, extending even to the street vendors. 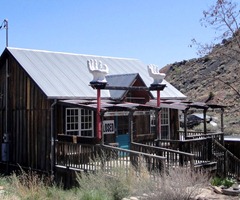 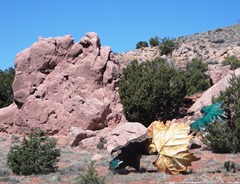 The light, color, air, sounds give a sense of clarity to the place, not only a visual quality, but an almost spiritual undertone.

I wanted to relate this back to some conversations about  transparency in health care reform, spurred by late-night conversations over very fine single-malt scotch with research cardiologists.  Or maybe to my 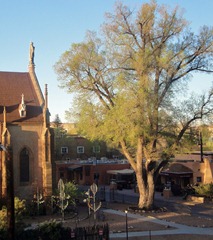 ‘windshield time’, lost in thought about the future as the road unrolled ahead of me.  Or about the sound of a violin concerto in a timeless adobe church whose wooden ceiling was textured to mimic the fluted granite carvings of European cathedrals.

Or maybe not today.  I’d rather just keep enjoying a cup of coffee on a cold crisp morning, watching the rising sun wake the colors in the church and the trees across the way, wind sculptures rotating beneath.

Posted by Dave Hampton at 2:57 PM No comments: Links to this post 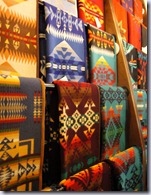 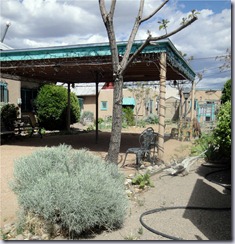 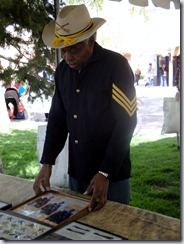 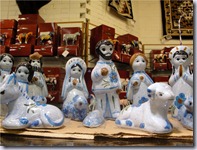 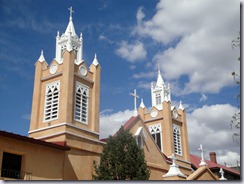 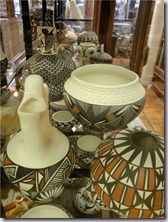 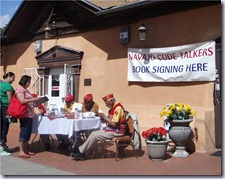 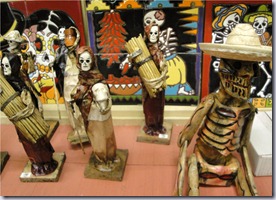 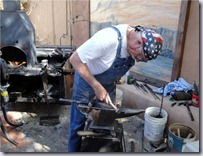 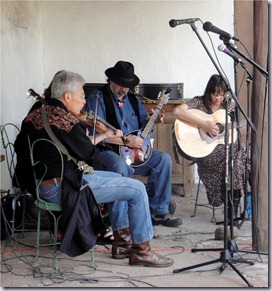 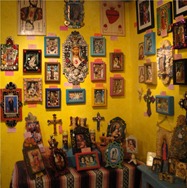 Posted by Dave Hampton at 2:45 PM No comments: Links to this post