With the Dutch political establishment sliding right on advice of SE voters (Maastricht included?), it seems like a good time to abandon the election results and arrange a serious apartment-warming party.  The weather is beautiful this morning, orange flags fluttering against a blue sky along Kesselskade, brisk breeze over the Maas.  And a brisk pedal over the bridges and into Beatrixhaven is all it takes to stock up on nibbles and drinks.

All it takes is Sligro.

One of the nice perks of owning a business is that it gives access to the warehouse stores for wholesale supplies.  I joined Makro a year ago, but was disappointed with their quality and pricing.  Not so, Sligro.

Sligro supplies stores and restaurants with food and housewares, a lot of it in bulk packaging like I would expect from Costco (without the camping gear and electronics).  The store looks like a downscale Jumbo at the entry, but is a vast warehouse with a wandering track through it, somewhat like an Ikea.  But instead of sample rooms and furniture, there are miles of shelves, roughly arranged into departments, filled with pallets of spices, plates, borrel mix, and cleaning supplies.

The meat and fish counters are impressive, the cheese, coffee, and wine selections are excellent, but fruits, vegetables, beers, and baked goods are less abundant.  There is a nice selection of linens and settings for tables, endless coffee and water pitchers, but few espresso machines or little professional cooking gear.  (You can, however, get a high-end Douwe Egberts multi-purpose coffee / tea / water machine for just over 3000 euros.)

There are samples of food and drink scattered everywhere, the trick is to pop out the end of an aisle and grab a bit before being run down by a fork lift.  Green-shirted staff are everywhere, and the owner is always in motion up and down the aisles, shaking hands with customers.  The quality and ambience of the store is very good, although it’s hard to judge to value because I have to buy so much of things in a package.  It’s ideal for a party, but no replacement for the neighborhood markets or grocery for everyday items.

I’m still trying to figure out the timing of the bollards that cut off vehicle access to my neighborhood, so it still takes too many walking trips to get things across the river and up to the apartment.  But now I’m stocked and ready to thank the folks who helped with the move and welcome a few friends to the new digs.

Disclaimer: I have not received any request or inducement to write this review; I applied for my own membership and paid for my own groceries.

Email ThisBlogThis!Share to TwitterShare to FacebookShare to Pinterest
Labels: Everyday life in the Netherlands, Food and Diet 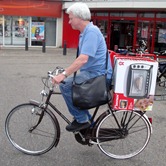 I spend about half of each day working this week, the other half unpacking, shopping, arranging, pulling together the new apartment.  It’s a challenge to move the goods in and the recyclables out each day; I’m learning to balance things on the bicycle to a degree that no American would normally do.

It’s going well, though.  Each day I feel a bit more settled, each day brings more familiarity with the moods and rhythms of the neighborhood.  A camera is still a good way to get to know the territory, learning the sights and light around me and finding the unusual and interesting pieces of the new neighborhood. 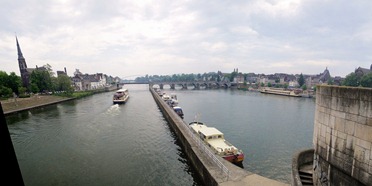 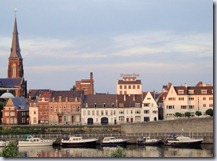 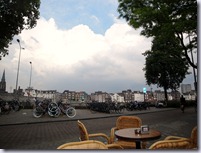 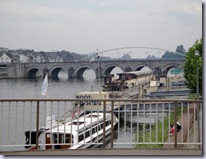 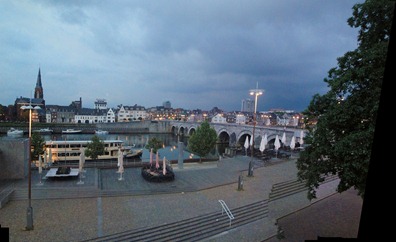 Posted by Dave Hampton at 2:21 PM No comments: Links to this post 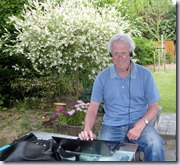 I’m camped out at a friend’s house, milking their internet connection from their back yard table.  It’s not a bad office-substitute, I like being able to make calls and take a stretch in the sunshine and fresh air.  It feels like the days that teachers would move class out-doors, and we’d all discuss things Socratic-style beneath the trees, or when the radio station let us go ‘on-location’.  It’s just nice to get out of the office.

The lack of internet connection in the apartment reminds me, again, of how dependent my business has become on fast multi-media connections to the rest of the world.  Project teams are scattered; I need to coordinate tasks and exchange results.  Resources are dispersed; I need to search journals and retrieve data.  Capital is out of position; funds need to be transferred and applied to component products and services.  McDonalds has enough bandwidth to do e-mail and banking, but not enough to make a reservation or transfer a file.  I can work offline at home for writing reports and reading papers, but need the interactivity of Skype to have conversations with people.

It’s a ‘hip-pocket’ business that doesn’t need a fixed office, but it does depend crucially on having a wire.  We trade one dependency for another: My free-ranging business just wouldn’t have been possible before the Internet.

The frustrating thing is that I can see a dozen connections around me, all locked down and unavailable.  I think that the proliferation of WEP keys under the guise of security is just a ruse.  The service providers have every motivation to sell their service to each user individually.  The threat of hackers is probably far less than the threat of connection-sharing, and it’s unfortunate that service providers have managed to scare each of us into a WEP-walled garden, fearing our neighbors as though they were terrorists.

Especially since the providers can’t actually provide a service with less than a month’s lead time.

Posted by Dave Hampton at 1:43 PM No comments: Links to this post

In perspective and out of touch

This was movie week and, as is the norm in my generation, I find life’s truths being played out up on the big screen.

I finally rented Up In The Air with George Clooney: I’d wanted to see it for a long time, anticipating personal connection and social commentary with my airborne lifestyle.  I got pulled into Sex and the City 2, my first exposure to the franchise.  There were only six men in the theater, and two were gay.  And I rented It’s Complicated, a more mature comedy with Meryl Streep and Alec Baldwin.  Along with Bill Murray and Robert Downey Jr., I enjoy watching Baldwin’s evolution in the way he plays increasingly mature roles.

The quality of the movies varied wildly.

I can’t say anything good about SITC2, which veered from bewildering to truly cringe-worthy. There must have been more to the series than the parade of excess goods and self-absorbed pouting that filled the bog screen.  UITA was mildly disappointing: the story was interesting but the characters never developed much depth.  I really wanted to know the moral behind Clooney’s self-improvement lectures: what did he fill his backpack with once he dropped his relationships and hit the road?   IC was jut the opposite: the story was a trifle but the characters spoke with genuinely interesting depth and honesty.

In all three, I found myself reflecting on two ideas afterwards: perspective and connection.

In each case, the main characters lost perspective on what matters in life, on how big their problems really are, on how they are perceived by others.  While each has made bold, independent lifestyle choices, they all were struggling with the  consequences, not seeing how their problems were, in fact, self-inflicted.  As the stories unfolded, the women of SITC2 never realized it, and that made it a worse movie.  Clooney finally did; Baldwin suspected it all along.

And, in all three, the main characters had each lost touch with the reality of life around them.  There were so many ways that encounters with culturally different women could have jarred the SITC girls back to life.  Instead, in it’s worst moments, the reverse happened: they ‘discovered’ that everyone else wasn’t so different from them (Muslim women wear designer fashion beneath their burquas).  Clooney purposefully cut himself out of touch with everyone around himself, then 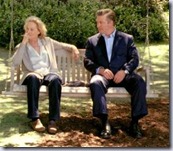 found that he couldn’t reconnect when he needed to.  Intriguingly, the displaced workers who he cut from their employers seemed to find their way better than he did.  Baldwin and Streep each have full lives that are, nonetheless, empty and out off touch: their professional and family relationships are achingly superficial and distant.  “We’ve each become what the other hoped we’d be,’ Baldwin observes, but the worlds feel created in isolation.  The children drive off, the bakeshop turns empty law partnership is meaningless.  The best moments are their dialog as they sit together and reflect on life’s turns, in touch with each other.

It’s been said that there are only two plots in movies: “A man goes on a journey” and “A stranger comes to town”. In fact, both are a reflection of the same story.  And here, despite there being three very different movies, I found only two underlying images: losing perspective and falling out of touch.  And each is just the inward and outward reflections of the other.

Posted by Dave Hampton at 12:23 PM No comments: Links to this post