The local face of the financial crisis

The media and politicians have painted the past year’s financial crisis as a dance among giants.   We read about banks that are too big to fail, trillion dollar government deficits, enormous TARP and stimulus packages, bailouts (or government takeovers) of pivotal industries.  And now we are assured that the medicine is working, the economy is improving, and the banking system has stabilized (except for Greece).  The debate has moved to the margins: bonuses, taxes, legislation, regulation.

What struck me on my recent visit to the US is how out-of-step that is with individual experiences.

Local news sources report the struggles that communities are having as they try to continue funding basic citizen services.  Villages are governed by town councils: a manager and aldermen from neighborhoods, local businessmen and engaged citizens. Their budgets are being pinched as investment returns dwindle, rainy day funds are depleted, and business and homeowner tax payments shrink.  I credit these people with trying to act responsibly within the limited budget they have.  As a result, they increasingly outsource police services, close parks, and lay off school teachers.

Local citizens are struggling to cope with the effects of these cuts.   Most still pay taxes, even though their  jobs are threatened, they may be struggling to meet a mortgage on a house that is losing value, their investment and retirement accounts are diminished.  But their constant dollars paid-in are yielding less and less return in public services.

So town meetings have become angry microscopic face-offs between non-professionals trying to manage a dwindling tax base  and citizens who want value for their tax money.  And, at this level, its all very personal: school programs, safety, libraries,  potholes are all up for argument

Thus, village politics and economics are becoming victims of the huge impersonal banking and governmental forces playing out above them.  And I don’t hear anybody at the government or banking level talking about how to help.

The big-picture theorists simply don’t appreciate the lasting damage being done to citizen confidence and cohesion at the local level, the impact on people’s perception of a fair and stable social fabric.

Posted by Dave Hampton at 1:07 PM No comments:

The magic of Anchor Ties

This is the view from my kitchen, at the back of my Dutch apartment.  I look out across rooftops, taking in a few steeples and lanterns, tiled roofs and brick walls (and the bothel, out of sight to the left).  And, over breakfast one morning, I started musing about the iron bars, 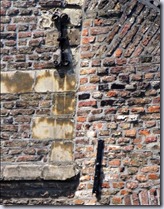 some with curlicued ends, scattered over the walls (close-up, right).

What are they; why are they there?

Okay, I’ve done my research, and they’re kind of cool.  Bear with me.

These are wall anchors (also called anchor ties or anchor stays), and I’ve found them everywhere since I started looking for them. 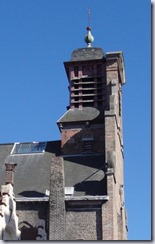 Consider the  brick-wall facade (left).  It’s really just a thin veneer laid against the the building behind it.  It doesn’t have any particular structural strength (it’s just a stack of bricks), so how does it stay up against the rest of the building?

The answer is to extend a bar from the building structure through the brick wall, then fix it in place with a wide, flat crosspiece that distributes the restraining force across a broad area of brick facing. Look at the example (right) from Ghent.  See the loop at the center of the bar, which is the tip of a rod extending back into the building.  The iron crosspiece has been pushed through the end of the tip and is pulled back flat against the wall, holding it against the building.

And pulling the wall against the structure behind it.

Lines of anchor stays trace out the structural elements of the building behind it.  So, where the building has a floor, the joists are extended through the facing wall and tied in place with a row of anchors.  Looking at the face or a building (below), I can trace the floors within.

Same thing holds for unusual places: a roof at the top of a belltower is held in place with a ring of anchor bolts; the slanted roof is behind a diagonal line of them. 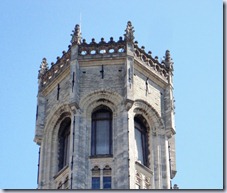 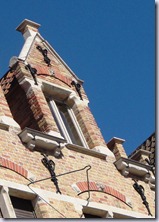 And once I start to notice, I see lots of them, in enormous decorative variety, on bridges, walls, everywhere.  I find that they tell a lot about the buildings and structures behind them.

They are also wonderful little grace notes applied by builders like signatures to their work, sometimes with numbers, artisan signs, or decorative whorls. 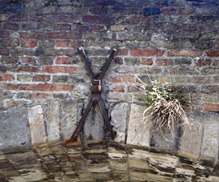 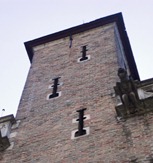 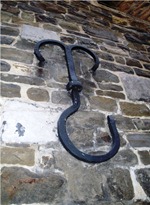 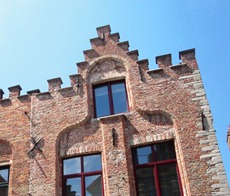 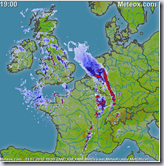 We have had two days with late afternoon ‘supercell’ storms blowing through Maastricht, of a sort I usually only see ont eh Great Plains back in teh US.  Both produced intense rain and wind. headed north into the rest of the Netherlands where they topped power towers, broke trees, and flooded streets.

It’s finally ended the tropical heat and humidity, oppressive conditions that have made for cranky days and sleepless nights.  With fluffy clouds and cooler temperatures at hand, it’s also good conditions to get back to writing.

I’ve been in and out of the Netherlands for the past month, traveling, pitching, meeting, so it’s been nice to get sustained time back along the Maas.  I’ve put sustained, uninterrupted time into the diligence efforts for funding the two startups, and to renewing my visa.  One unpleasant surprise was to find that the US embassy in Amsterdam now charges $83 to add extra pages to a passport for visa stamps: this was a free service up until this week.

In contrast, the IND fee for renewing my residence permit remains zero euros.  I collected the last of the information and sent it off today.  The two renewal conditions that I find that I need to stay vigilant about are 1) being out of the country no more than 25% of the time, and 2) maintaining 25% of my startup capital in my business bank account at all times.

I’m still sorting things with the realtors from their mishandling of the apartment changeover.  They reported that they have talked amongst themselves and agree that they did a great job, so would I please pay the remainder of their fee?  ‘something less than the audit and apology I’d hoped for.  Meanwhile, the prior realtor scooped 1000 euros out of my security deposit refund, thank you, for doing the checkout from the prior apartment.  That was, perhaps, an hour’s diligence with help from the landlord and I.  It’s really hard to see how these folks justify their fees, but they seem universal and unavoidable in Limburg’s rental market.

I’m getting a general sense that people increasingly have their hand out during any business transaction, collecting fees and adding charges for minor services and former courtesies.  It’s happening everywhere, not just the Netherlands; creating financial friction that taxes every transaction and contract.  Maybe its always been this way, but it’s forceing me to spend more time shopping among services, scrutinizing invoices, and doing things myself instead of on contract. 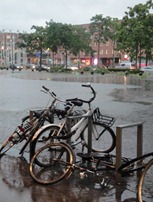 ‘wrapping up with two warnings about software:

I’m a big fan of Windows Live services: I use ‘Wave 3’ Mail and Writer extensively.  ‘Wave 4’ just released in beta, and I gave it a spin for a week.  It was very disappointing: buggy, opaque, and slow. The Ribbon interface has been transposed in from Office (only different), making functions hard to find, and some windows with fundamental directory functions had over-writing problems that made them unusable.  I’m uninstalled and am waiting for the full release.

I depend on Skype, including conferencing and their two pay services, Pay As You Go for general calling to land-lines and mobiles and Skype-In to access services from telephones.  Unfortunately, the accompanying Win7 Add-Ins are buggy and crash IE8, and the problems get worse version after version. Their forum discussions keep saying that the problem is solved, then it isn’t, then it’s worse, then a fix is coming, over and over.  I’ve concluded that it’s time to simply disable all add-ins in the interest of system stability, and rely on minimum Skype functionality.

Posted by Dave Hampton at 4:09 PM No comments:

So, now life gets back to normal 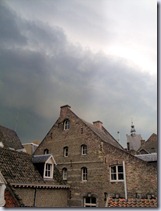 The thunderclouds rolled in from the south this morning, bringing a brief burst of rain and wind that scattered chairs and pedestrians.  The temperatures moderated, the breeze shifted, and the sticky debris of a night’s celebrations washed from the cobblestones.

But it was fun while it lasted, wasn’t it?

‘Like the Billy Joel song, yesterday evening saw “the cowboys and their kin, like the sea come rolling in”, although it was a tide of orange-clad fans and families. 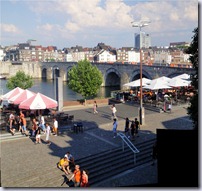 By game time, the Vrijthof Square was filled, nervous anticipation mingling with the haze of pot smoke.  The anthem was sung, the crowd roared and waved flags and horns, the ball was put in play. 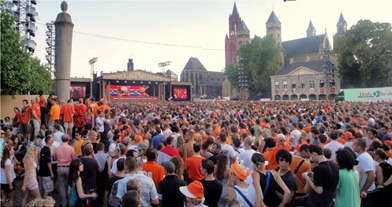 I wandered back to the waterfront to watch with friends at the apartment.  The large monitors along the street blared the game and the cheering was continuous outside the windows.  Curiously, our television connection lagged theirs by about 3 seconds:  it took the edge off every penalty kick to hear the crowd groan or cheer moments ahead of actually seeing the play. 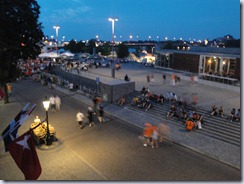 I thought that the Dutch were scrappy and energized, although the foreign commentators were uniformly critical of the Netherlands’ style and aggressiveness. 'I think that, as Americans, we look for different things in a game: a strong offense, a high score, a win.  Despite the loss, the Dutch took it all philosophically: there weren’t a lot of sad faces along the streets afterwards and the party flowed on into the wee hours. 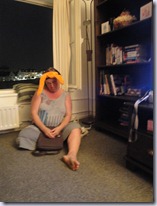 There was a rumor that Andre Rieu was going to make a surprise appearance to cheer up the crowd at the Vrijthof after the game, but I don’t know if he made it.

And, today, it’s all just memory: the flags are coming down and life is getting back to normal.

…and there hasn’t been a vuvuzela squawk all morning.

Email ThisBlogThis!Share to TwitterShare to FacebookShare to Pinterest
Labels: Everyday life in the Netherlands, Holidays and Events, Sports

Night of the Vuvuzela (not the waltz)

I returned to Maasstricht late last night; the sky was lit up with thunderstorms and the midnight streets were filled with drenched refugees from the annual Andre Rieu concert week in the Vrijthof Square.  Yet, even through the classical garb, soggy spirits, and tropical humidity, the vuvuzela rang out over the city.

The horn, a South African instrument, has become a big symbol for this year’s World Cup match (okay, still a step behind Beesie), With the finals upon us in a few hours, the horns are everywhere.  As the Dutch helpfully describe them:

Even without understanding much Dutch, you get the impression that it is a) long, and b) loud.  They sound a bit like ragged alpine horns, usually accompanied by shouting and singing.  It all makes  a wonderful blend of street noise that goes well into the evening.  This evening, especially, will be frenzied (there are worries in Amsterdam that vuvuzela-tooting hoards will stomp over the roofs of the houseboats, with attendant risks of capsizing and sinking).

Andre Rieu moved the stately evening of waltzes out of the Vrijthof Square this afternoon, taking up residence in the MECC Convention center outside town. Both the match and the extreme heat (hitte); have been a challenge: there will be a live connection back to the Vrijthof, split-screen with the games. 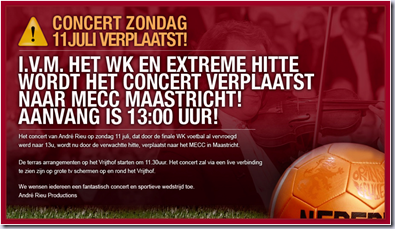 This is no mean trick: his stage is the size of a Greek monument, with multiple levels and archways to support the dancers and musicians.  This is what it looks like, and the square they are vacating for tonight’s game. 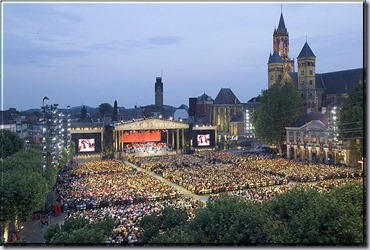 At any rate, I’ll be there, just hours from now.  ‘Fingers crossed, no matter what Paul the Octopus and Mani the Parakeet predict…

Posted by Dave Hampton at 4:53 PM No comments: