Books on the nightstand

Although winter is in the air, I am only just catching up with Cam 60, the summer edition of the University’s alumni magazine.  Big, glossy, and parochial, the quarterly issues are full of news only a ‘Light Blue’ could love, targeted to Cambridge’s wealthy elder audience of potential donors.  “The Best Statue in Cambridge” and “An Idler’s Idyll” (Byron and Punting, respectively) crowd against ads titled “The Vitality of Thought” and “Take choice of all my library” (Judge School Executive Education and the Cambridge University Press, of course).  This is clearly not marketing to the masses.

Why, then are the faculty book recommendations so ordinary?

John Simpson (Magdalene 63; BBC World Affairs Editor) recommends Did You Really Shoot the Television? (an account of youth) and Constable in Love (an artists biography).  Katie Derthem (Magdalene 88, broadcaster) is reading The Devils Casino (Gossip from the women who knew them best), while Robert Gordon (Professor of Hebrew) chooses The Invention of the Jewish People, and Teri Apter (Senior Tutor, Newnham) suggests How the Baby Boomers Took their Children’s Future.

The scholars chose mix of classics in their field and popular general works, for the most part, even considering it was a list for summer reading, it feels light.  Surely I could have chosen better.

I scampered upstairs to test the intuition against my own bedside reading. 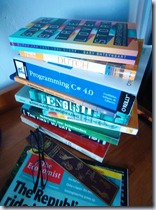 I am proud that the stack holds a primer on Optimization Theory, a review of Stochastic Modeling, and a serious work on the History of Western Philosophy (Hobbes to Hume).  Better yet, they aren’t at the bottom of the stack, implying an active interaction between writer and reader each evening.

I hope its not just the order that helps me to sleep.

And, or course, Watching the English, the definitive sociologic guide to British Behaviour.  I wish that the UnDutchables folks had done something this good about the Low Countries.

At least, I’d know when to talk about the weather and when to avoid revealing my profession.

An eclectic and characteristic collection, probably one that mirrors the nightstands of the Cambridge dons.  But choosing just one to recommend, one that people will read, remember, enjoy.  I looked at my stack and sighed.  I really want to recommend Stochastic Modeling, but I know Super Sad would be the right choice for an anonymous mass audience.

And maybe that’s where it all goes wrong?

Posted by Dave Hampton at 11:35 AM No comments: Links to this post

Email ThisBlogThis!Share to TwitterShare to FacebookShare to Pinterest
Labels: Books

Can expats be intolerant?

I met some fellow-expats for dinner the other night: the US election was just past and the results were on everyone’s mind.  It was a mixed group, Democrats feeling wounded, Republicans feeling vindicated.  What surprised me was the intensity of the anti-Obama feeling among the conservatives, justified by demonstrably false beliefs about his heritage, beliefs, and intentions.

It contrasts with my usual experiences among expats: they speak knowledgeably from a wealth of experiences that cut through simple stereotypes, yet temper their beliefs with a willingness to listen and to see things through other perspectives.  My business-school professor would characterize it as “strong beliefs, weakly held”.

In a word, they are tolerant.

I’ve been thinking about this for a few days; it’s not a simple association with left- or right-wing views.  A committed liberal in a socially conservative country would have  struggles equal to a committed conservative in a socialist country.

My guess would that intolerant people would tend to fail as expats.  The literature generally bears this out:

The situation may actually be more nuanced:  Those who join or erect an insular environment, and those who take a stand against the human costs of authoritarian politics or lax social policies, succeed in their own terms.

But those who remain rigidly ill-informed or self-righteous, or who deny the necessity to reach out across cultures to learn and adapt, are unlikely to remain abroad for long.

And, indeed, we all did have a good exchange on whether Obama is truly a socialist or less patriotic than ‘W.

Posted by Dave Hampton at 7:58 PM 3 comments: Links to this post

I’m convinced that the secret to business success is to stay alive long enough to find your audience.

New business success is fraught with risk, seldom actually related to whether the underlying idea is any good or whether the technology will work.  As I meet other entrepreneurs, I’m almost always convinced of their talent and the credibility of their innovation.

It’s a beneficial process in many ways, but a long and expensive journey.

In spots along the way, I underestimated the time and risk of particular steps; in others, I extended credit that I shouldn’t have.  The gap between income and expenses can narrow with unexpected swiftness, the needles all going down at once as the ground rushes up.

I heard an interview with Bill Gates, asked why Microsoft kept such an unusually large cash position in its accounts.  He said it went back to the early days, when he realized that he was responsible for paying his friends for their work.  He always wanted a year’s payroll on hand just in case the revenue wasn’t there.

Maybe it’s apocryphal, but it rings true.  This month’s experience is not one I want to repeat: It stiffened my spine for collecting invoices, for assessing resource risks more appropriately, and for protecting the cushion I kept against hard times.  We’re good for another quarter now, more determined to close the deals and get the business rising under power again..

I used to listen to The Overnightscape, a podcast by a native New Yorker who recounted his daily adventures in Manhattan.  One of his staples was a search for the Beautiful Breakfast, involving stops at a half-dozen neighborhood eateries to pick up various components.

Similarly, a delightful day among the Dutch involves some roaming to find the right components, but it’s terrific when it comes together.

First the day should begin without rain.  especially without cold rain.  A hot breakfast, coffee in the window, watching the boats chug by on the Maas.

You can already tell it’s Saturday. 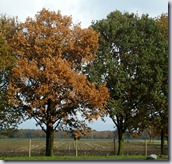 A drive across the countryside is nice.  Once I get out of the city, the landscape opens up, flat as a tabletop, dotted with red farmhouses and autumn trees.

A latte at a roadside rest stop is a bonus: the Dutch tend towards full-service restaurants along the highways, tablecloths and waiters with aprons who know how to make strong coffee.

A visit to the Kunsthal.  This is  one of my favorite art museums in the Netherlands: they always have wonderful themed exhibits by modern artists.  Visiting the eclectic skyline and waterways of Rotterdam is a bonus.

So are the huge bunny sculptures next to the museum.

This winter, the museum is featuring a large assembly of paintings by Edvard Munch.  I want to write about this in detail alter, but it’s worth a visit – many of his best-known works, but a wide array of lesser-known paintings that really show his breadth and evolution as an artist.

A parallel exhibit brings together an international collection of realist works, paintings and sculptures grouped around eight theme areas.  These are really quite remarkable, and I want to do a separate post on the exhibit as well.

Dinner at the New York Hotel Café.  This is housed along the waterfront in one of the old passenger terminals: it’s all wood, art glass, and model ships, with the bustling harbor outside the windows and afternoon tea inside.

The sunsets against the port are filled with light and contrast;  and the city lights set off the old and new bridges in the opposite direction.

A city fireboat pulled into the harbor, turning on its water cannons.  Logically, it was probably just a training exercise, or maybe a chance to clean the pipes and valves. 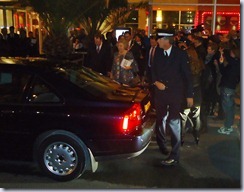 But, impractically, it was actually done to entertain the Queen, who was attending a reception for the opening of the new ‘Tallest Building on the Waterfront’.  She popped out with the Mayor, waved to the crowd, disappeared into her limo, and sped off.

Way cool.  My three immediate impressions were how casual it all seemed (we were all just across the street, maybe six meters away), how tiny she was (is this a job requirement for Queens?), and how perfectly coiffed all her hair was.

A radio host back in Seattle used to have a segment called “Brush with Greatness”, where ordinary people could call in and tell how close they’d gotten to meeting Famous People.  I have to admit, it’s still a small thrill to be able to say that I’ve seen the Queen.

Posted by Dave Hampton at 7:41 PM No comments: Links to this post 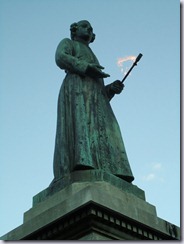 It’s something that the average citizen of Maastricht sees almost every week, yet it links to something that they haven’t seen in over a century.  And they connect through the now-mysterious medium of pneumatic chemistry.

Around 1600, Jan Baptiste van Helmont, a  Flemish chemist, determined that there were vapors distinct from atmospheric air, which had previously been regarded as a primitive element, like earth and fire.  He coined the word “gas”, sometimes thought to derive from the Dutch pronunciation of the word “chaos”, and linked "gas sylvestre", released by burning charcoal, to the unbreathable “fermenting mist” found in caves (both now known as carbon dioxide).

Soon, the study of gases, pneumatic chemistry, was taken up by many others, studying the physical properties and reactions of derived, isolated gases.  A subspecies of ignitable gases, the Inflammable gases, previously known from studies of marsh

vapors, were synthesized in the laboratory around 1726.  The process involved heating coal, then purifying  the vapor by bubbling it through water to remove the tars and through lime water to remove inert gases.  The resulting Coal Gas consisted of hydrogen and methane: it could be stored in a sealed vessel called a gasometer, then transported or piped under pressure to fixtures where it could be burned for illumination.

Jean-Pierre Minkelers was a Professor of Natural Philosophy at the University of Louvain when commissioned by his patron (duc d’Arenberg) to investigate ballooning.  The Montgolfier brothers made their first flight in a hot air balloon in 1783 using hot air, and Minckelers, well acquainted with pneumatic chemistry, set out to create balloons floated by inflammable air.

He burned a wide variety of substances and filled envelopes with the vapors before settling on coal gas as the best solution.

And, somehow, this led Minckelers to the idea of illuminating his lecture halls with coal gas around 1785.  He kept no notes of the process, and his invention is only known because two students recalled his pioneering demonstration of gaslight illumination in separate publications fifty years later.  Minckelers had passed away in 1824, after fleeing an unhappy political situation in Louvain to arrive in Maastricht in 1794, where he was appointed professor of physics and chemistry at the

The city fathers in Maastricht honored his discovery with a statue in the Markt Square, where he still holds an eternal gaslight flame, surrounded by the pipes, pumps, flasks, and distillers that he used to make the first use of illuminating gas.

For the entire story, read The Origins of Gaslight Technology in Eighteenth-Century Pneumatic Chemistry (2009, Tomory).

“Life is a Color Wire” has done a good blog post on the history of the statues, and also a weirdly wonderful sound-art installation linking the statue to the statue of the Mooswief across the square.

Posted by Dave Hampton at 10:47 PM 2 comments: Links to this post