Each Christmas, I take home a selection of seasonal pastries and crafts from the local markets.  My mother’s side of the family is German, my father’s is British, so I end up making stops on both sides of the Channel for traditional fare.

The Aachen Christmas Market, just across the border from Maastricht, is a good one.  It surrounds the church and city hall in the center of town, filled with booths selling ornaments, carvings, pastries, and, well, frites.

I visit to pick up a fruit breakfast bread with powdered suger, stollen, that my grandfather used to serve.

They weigh between one and two kilos (that’s nearly five pounds for a US-football-sized one), and are delightful, even if they challenge the Ryanair weight limits.

I’m also charmed by the lebkuchen, sort of a soft, lightly frosted spiced gingerbread cookie, a nice gift for friends.

But my bookkeeper and business partners get handmade chocolates: I have a bit of a holiday hierarchy going on here, I confess. 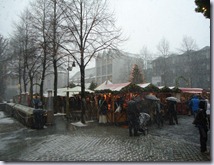 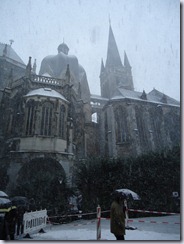 A raging snowstorm moved in on the Market as I was shopping, blurring the cathedral spires and frosting the food pavilions.  I looked like a snowman in minutes, drifts on each shoulder and a soft white mound on my normally birch-bark blond hair.

I didn’t really notice though: since I was trying to get a picture of the best creepy-Santa so far this year, along with several of his helpers… 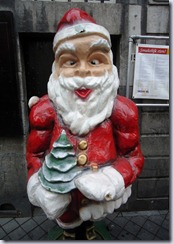 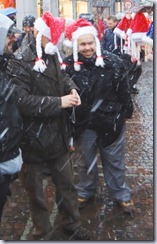 Posted by Dave Hampton at 10:28 PM No comments: Links to this post

Email ThisBlogThis!Share to TwitterShare to FacebookShare to Pinterest
Labels: Events, Food and Diet 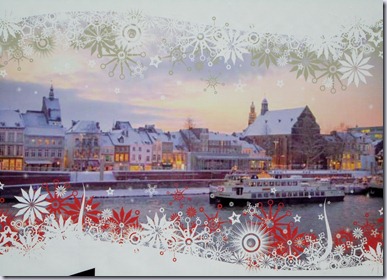 Taking a page from Koln and Brussels, Maastricht has dispersed its Christmas Markets this year.  Under the banner “Magic Maastricht”, the venues have spread out from the Vrijthof to a half-dozen locations, including the “Keerst aan de Maas” location outside my apartment.

Reality Check: I’m tickled by the depiction of Kesselskade, above, with my apartment windows darkened and the vacant apartment below me fully lit.

The Vrijthof site, below left, has more stalls with shops, less food than usual, and a second ice rink next to the SkyWheel.  The Markt Square venue, below right, is a tiny area of crafts and food around a central plaza (apparently, there was a plan to put huge ribbons around the town hall in the background to make it look like a wrapped gift).

I think that the best change this year has been in the lighting.  There are icicle lights in many of the trees, and the boulevards are lined with twinkling trees (Wyck, left, below). Even the High Bridge over the Maas is draped with icicle lights (distant right, below). 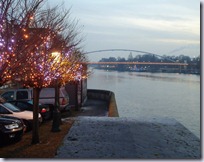 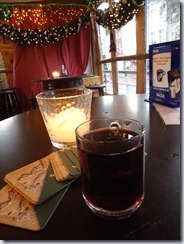 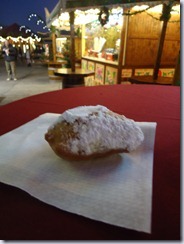 Maastricht’s winter carnival continues daily from 11am – 10 pm through January 2.

Posted by Dave Hampton at 9:38 PM No comments: Links to this post

Email ThisBlogThis!Share to TwitterShare to FacebookShare to Pinterest
Labels: Events, Everyday life in the Netherlands

On the map, it was a finger-length.

The route strayed in spots, but generally arrowed west along motorways and flat countryside, bypassing cities.  Not that it mattered, I’d likely be on the ring roads before (or after) any commuters were thinking of using them.

In a word, easy.  Just point the car, press the gas, and I’d be in Bristol before I knew it.

The plan hatched over the weekend: a major gathering of investors at a seaside chateau on Tuesday.  We secured a spot midway through the 10-2 meeting, and my CFO worked up some posters so that we’d have a professional appearance.

The problem was that I was in Maastricht, 800 km away.

Planes cost over 600 euro; trains were not much less and took longer.  Travel times were four hours either way anyway; why not just drive it.  Car rental was 132, ferry 30, gas 100: it’s a bargain.

2 am:  I crunched through the ice to open the garage and slide my tiny rental car out into the dead winter night.  The engine complained, the tires skidded.  Road spray froze, crusting salt and mud onto the lamps and windscreens.

South to Luik, east across Belgium, podcasts humming in my ears, the miles melting away.  Brussels is easy at 4 am;  I looped the ring and sprinted towards Dunkirque.  A little gas outside Brugge, breakfast of coffee and Pringles, chasing the 6 am ferry.  It sailed into the docks on-cue, lit like a wedding cake.  A half dozen sleepy cars elbowed among a crowd of eastern European trucks for space.  I celebrated with the 7-item special breakfast and phoned to say I’d be there by 9.

Traffic thickened, slowed, then stopped before Heathrow.  An ice storm frosted the trees and polished the M4 from Reading out to the coast.  The twisty path from the M5 to Clevedon led to several 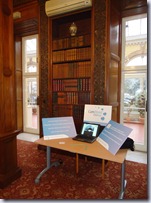 dead ends; there was the matter of getting suited up in the parking lot on arrival.  In the end, 11 hours rather than the expected 8.

The pitch went well; the investors promised diligence and money.

I scavenged the lunch buffet after they left.

2 pm.  I reined the car back east and pushed through the familiar ice and fog along the M4.  Running counter to the commute, I thought I’d make up time, getting to Dover easily for the 6 pm ferry.

I need to do a simulation some day to see if Britain’s ‘Pass only on the right’ rule actually speeds traffic vs. America’s ‘pass on either side’ tradition.  I think it creates bottlenecks, especially when trucks pull into the lane.

5:45 pm: Dover Ferry Docks.  The cars have loaded but the trucks are pulling on.  I leave my lights on and the motor running, smiling hopefully through the dirty windscreen and waiting my turn to squeeze on.  At 6:05, they wave and close the gates, leaving me and one truck on the docks.  The brightly lit ferry sails into the darkness of the Channel. Augh.

My philosophy is that there is always another train, plane, or boat.  But this is bad: it means I’ll be driving across Belgium at midnight.  I slipped into a fast-food outlet and disconsolately nibbled a lukewarm burger and limp fries.  I listened to Adam Curry railing against the TSA. I watched the staff clean the foors.

Wasted time.  I took my frustration out on Twitter, typing, deleting, over and over.

The ferry boarded at 8; I huddled into my winter coat and slept my way across.  Nearly 11 pm on landing: a quick refuel and a bit of water and junk sugar.  The roads were nearly empty again: Orion rose, snow began to fall.  Linear progress takes on a cyclic rhythm:  jumps between rest stops, hops between cities, over and over.  I wonder if people are programmed to turn lines into circles.  I wonder if it’s a sign of mental decay.

Vans and SUVs rushed out of the darkness and around me, vanishing in a spray of road salt.  I kept to a steady 130, channeling my inner Burt Reynolds and wishing for a CB and Sally Fields.  I don’t even stop to consider that this is certainly a marker for mental decay.

Especially since it’s actually from Smoky and the Bandit and not Cannonball Run.

I pulled into Maastricht around 2:30 am, close the car into the garage, crunch back through the snow.

Didn’t Burt pull into a carnival atmosphere with cheering throngs at the finish?  My run ended in a dark and shuttered Christmas Market, grins of happy faces drawn into the snow on the parked cars.  My public.

Two finger-lengths on the map, at the  least, and a heroic Channel crossing.  And Sally.

Posted by Dave Hampton at 10:53 AM 2 comments: Links to this post

The rain turned unexpectedly warm overnight, so I was able to wait for the 601 bus without shivering in Porto’s pre-dawn quiet.  An air traffic controllers strike in Madrid, then rumors of snow in the Netherlands, put our flight in doubt but there were worse fates of staying another day in Portugal.  Porto is a complex place, rewarding breathless climbs along its steep streets with unexpected portraits and rich landscapes.

To which, more later.

Snow began falling as the train pulled out from Eindhoven.  The flight was on-time and uneventful: I’d collated pictures and archived receipts as Ryanair bumped northward through unsettled weather.

The fields had a dusting of snow, with an occasional mini-drift where the wind had scoured a road clean.  It was cold, though: clearly the Dutch have been having some hard freezes in the past weeks.

Unfamiliar lights glowed through the snow as I crossed the bridge to Kesselskade. “Kerst aan de Maas” flashed against the darkening sky, framing a line of familiar Market huts receding into the distance.  Sinterklaas and a gaggle of Zwarte Piets stormed a bar across the street.

Christmas has scored a direct hit on my doorstep.

It looks like the traditional Vrijthof Market has ben split in two.

The square holds the Sky Wheel, ice rink, a smattering of foods, and long lines of huts selling Christmas crafts.  The slide, another ice rink, the Gluhwein pavilion, and a carousel have settled in across the street from me.  The lights and music are pretty festive so far, and I’m seeing clear advantages to having hot alcohol only 40 seconds walk from my door.

It’s all sort of a nice greeting: I had a mug of win, my favorite sausage, and nibbled the first oliebol of the season.  Suddenly, it feels a lot like Christmas.

Posted by Dave Hampton at 9:56 PM No comments: Links to this post