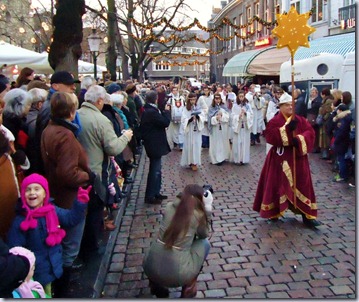 In western Christian tradition, Epiphany celebrates the arrival of the wise men at the cradle of Jesus, His introduction to the gentiles.  Falling on the first Sunday between January 2 and 8 (or fixed to January 6), it marks the end of the Christmas season, the literal Twelfth Day of Christmas. 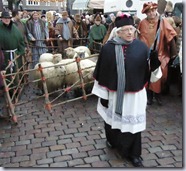 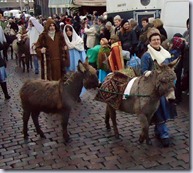 The Dutch treat it as a mix of spiritual and pre-Carnivale spectacle.  Maastricht’s Catholic community holds a parade to recreate the journey of the Drie Wijzen uit het Oosten.  A star is held up at the head of the parade, which everyone follows, singers, shepherds, bedouins, and kings. 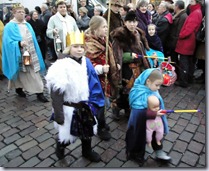 Children dress up and join the procession, which winds around the town three times, finally returning to the Vrouweplein Basilica for the presentation of the gifts.

It’s a fun event to watch: the brightly dressed marchers mingle with sheep, horses, and donkeys, and the final (portly) King appears astride a (two-humped) camel.  This gets lots of ooh’s and ah’s from the kids as the animal sways along the narrow streets o the old city.

The celebration marks the end of the Christmas Markets, so there’s generally a scamper from the parade to the town squares for a last taste of Oliebollen, Reibekuchen, Bratwurst, and, of course, Gluhwijn.