I had a business meeting in Brussels yesterday morning, and took a bit of time to enjoy the sights, including the Atomium and the art museums. Fortunately, Saturday was also Museum Night Fever, the city’s annual evening set aside for touring the arts.  All-inclusive tickets were 8 euro each, accessing 19 museums and the shuttle buses roaring between them for six hours until 1 am.  (Disclaimer:I was not asked to review this event: I paid my own way and these are my opinions and pictures).

Despite traffic, six hours is enough time to cover a half-dozen museums pretty well.  I started with the BOZAR, the Palais des Beaux-Arts, a classical art museum. 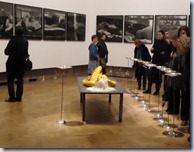 It’s featuring a very good retrospective of Venetian and Flemish portrait paintings across four centuries.  The parallel developments and narrative evolution of the art is well described, and it’s an amazing exhibit for seeing how art technique and insight develops.  I was less impressed with Luc Tuymans works, they reach for social significance in a very heavy-handed way and the technique is crude.

Himmler (for the evil eye glaring out of the shadows) was my favorite work.  Finally, some whimsical works by eight Hungarian artists are alternately amusing and disturbing.  Overall, a very worthwhile start.

I took a turn through the city’s foundations at Coudenberg, the ruined cellars of the old palace that burned down in the early 1700’s all read-brick and arches, then moved on to the Natural History museum.  Here I ran into the unique aspect of Museum Night, the fusion of kinetic and visual arts. 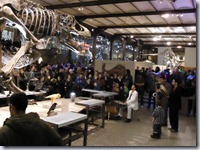 Young local dancers and avant-garde musicians were featured among the skeletons, an odd mixture of commentary and accent that sometimes and failed others.  I’d forgotten how earnest young performers can be: everyone was poised and hard-working, occasionally engaging the audience and generally livening the exhibits.  The whale skeletons are among my favorites: the jaw bones are just astounding.

The strangest fusion was at the Wiertz Museum, where absolutely vast Romantic canvasses of heroic legends were accented by a dance / mime troupe.   It took some getting used to, honestly, and the (lack of) dress was distracting at first, but their reactive interpretation of David and Goliath was excellent and they did achieve some striking tableau’s against the works. 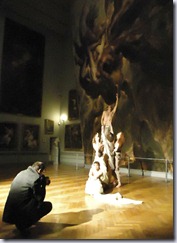 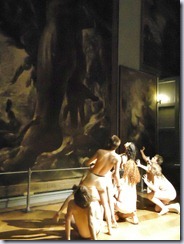 But, then again, the Wiertz is always one for strange juxtapositions. 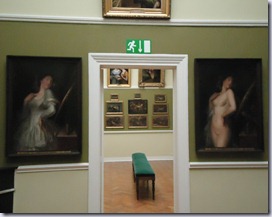 I stopped chasing the marker cones long before the all-night parties were underway, but managed to get a half-dozen attractions under my belt before the evening was out.  These events are held in many cities across Europe now, and are always worthwhile if you can link up with one.