‘Hope you’re having a wonderful Thanksgiving !, my friend greeted me on Thursday morning.  Then they turned serious.

“No, a family holiday, actually.  People gather at someone’s house, cook an enormous feast, and share it together.”

We used to all go to my grandfather’s house: he’d have the grinder out early in the morning and we’d all take turns cranking while he put bread, egg, vegetables, turkey bits in to be minced into the dressing.  A sign of maturity was being allowed to feed things into the hopper without having adults fret about whether fingers would join the giblets.

We’ve since lost the trick of making stuffing using that recipe – it’s been years since someone could get it to come out right.  But we do have a killer cranberry recipe to replace it.

So everyone cooks all morning…and then?

“A glass of wine when the bird goes into the oven, and everyone settles down to watch television while it cooks.  Mostly parades.”

What sort of parades?

“The New York department stores put them on – it involves lots of bands and, well, enormous balloons.  And football.  American football.”

It was a day for getting out the wooden railway tracks and building out across the room, adding cars and Lincoln Log houses, staging complicated wrecks.  It was a day for reading books, playing in the snow, getting reacquainted with cousins.

And always turkey for dinner?

And red candied crabapples and green candied pears, a relish plate with olives and celery.  The turkey, separate plates for white and dark meat, a bowl for the stuffing, another for gravy.  Mashed potatoes, sweet potatoes with

“Actually, the cleaning up was a family event, then sitting around the living room for some conversation or a movie if one was on TV.”

Or, lately, take a nap before heading to stores at midnight to start Christmas shopping.  Don’t ask.

“One way or another.”

It’s a bit of a moveable feast these days, we take I on the road, sometimes check into places with buffet dinners on the coast, occasionally do core elements out of a box and focus on the essentials. 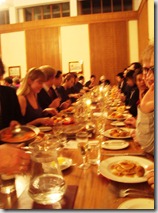 Five years ago, ‘Liam came over to Cambridge for the Expat Thanksgiving organized by Cambridge MA, in the US.  The turkey was wrapped in bacon, there was a lot of wine for 2 pm, lots of patriotic flags around the room.  It looked like there might be dancing.  At 2 pm.

The Vice Chancellor gave a toast saying that “We don’t understand Thanksgiving, we’re not sure that we approve of it, but we know that you miss your families, so try to have a nice Thanksgiving!”

And note that the Pilgrims do, in fact, look a bit Dutch.  There’s a reason.

Email ThisBlogThis!Share to TwitterShare to FacebookShare to Pinterest
Labels: US Holidays