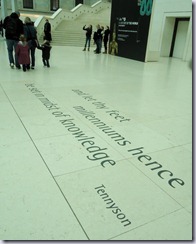 Wrapping thing up here in Britain, collecting some loose ends that I’ve been meaning to write about…

I resolved to get back into some exercise here in the UK, paralleling my New-Year’s resolutions in the Netherlands.  There’s a key that remembers my progress but not my equipment settings, and complete lack of abdominal equipment (maybe the Brits don’t need it?)  No matter, it’s nice to have a break and some dyspnea.

The only hiccup so far was when I discovered, too late, that the door I thought led to the showers actually led to a public hallway.  The British are usually fanatic about labeling and warning: a bit of help here would have saved much merriment in the upper hallways of Royston Leisure Centre.

On the subject of signs, these anti-terrorism posters have shown up in the local Park ‘n Ride.  I have mixed feelings about them: where the treat is real, I suppose that they could save lives.  At the same time, they seem calculated to promote surveillance and suspicion and undermine community trust and tolerance. 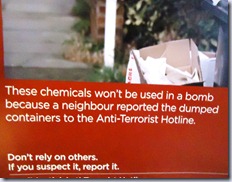 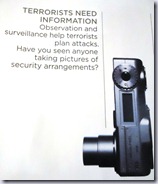 More happily, MasterChef has returned to BBC One.  There’s a dramatic new studio that is dark and ominous, but Gregg and John are comfortingly consistent with their flair and shtick (“Then in comes that lovely smokiness of the bacon”).

I’m ready to bake a fondant and a rump of lamb (in that order, and in separate pans). 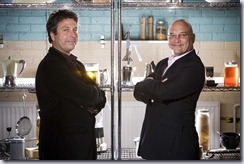 Elsewise, I have a habit of dipping into Starbucks for a coffee and an internet connection when I’m on the road.  It’s a great deal, as long as you keep some money on a Starbucks card and churn it mildly each quarter, you get near-ubiquitous access to high-speed wireless.

What I had not anticipated in the smaller villages was the 10 am and 2pm flood of Mom’s into the coffee houses.  A couple of leaders arrive to start rearranging tables and chairs, smiling helpfully as they ask for mine.  Within 20 minutes the room has filled strollers and children, sodas and snacks.  The mothers huddle, their kids diffuse widely, and the various business meetings and readers disperse.

Fortunately, they move to a regular daily schedule, so the tide is predictable and regular.  It' is also irresistible.  I am hoping for warmer weather so I can connect from the outside soon.

Finally, while spending last weekend in the British Museum, I started to wonder at the overwhelming national reliance on collecting and classifying things. I’ve seen it in the Cambridge museums as well, a goal of bringing back one of everything back to Britain, then laying them all out in neatly ordered rooms, chests of drawers, and progressive specimen tables. It’s all named, species and genus, then evolutionary and taxonomic links are drawn. I can’t think of anywhere else that seems as obsessed with it.

It may have been a passing phase as science found its footing during the 18th and 19th century: the drive to find general laws being driven by the artifacts returned by explorers. Some of these attempts, like ethnographic attempts to categorize humans and societies, feel misguided today.

But the spirit of collecting and classifying is still very much a national trait. From national bird-spotting days to efforts to collect all examples of antique planes, it’s e charming, sometimes bordering on good-natured eccentric, pastime with little parallel in the US (or the Netherlands).

Posted by Dave Hampton at 2:51 PM No comments: Links to this post

I’m wrapping up a three-week stint in Cambridge, closing our fund-raising round for CamStent and delivering my lectures on Medical Devices and Diagnostics at the University.  The weather has been insufferably cold and rainy, lightened with a brief flash of spring this week that brought the smaller flowers out across the fields.

The big news has been with investor.  Raising money has been much harder than I ever expected: I started a year ago, thinking that it would take three months to raise 300K GBP, but it’s taken far longer than expected.  I’ve had to develop skills for pitching and closing on the fly, fortunately with good critiques  trainers, and coaches provided by the organizing groups.  With persistence, we now have close to the full amount soft-circled and checks are starting to arrive from the angel investors who are backing us.

It’s a real watershed, not only moving from a founder-led company to an investor-backed one, but also from a barely-funded startup to a financially stable micro-business.  It’s fun and exciting: I very much appreciate not only our new investors but also the backing of the UK government and universities who brought us this far, and the many friends and mentors who have given support, advice, and encouragement throughout.

At the University, the lectures got off to a good start, and I’m preparing for another round this week before I hop the ferry back to Maastricht.   I changed my approach this year, moving from straight lecture to a more Socratic “context-case examples-discussion” format.  I do like the engagement that this approach has encouraged vs. the more distant respect that the “stand-and-deliver” format created of past years.

It reminds me again of how each discipline develops it’s own characteristic teaching style.

My math and physics classes wee obsessed with problem sets: we would copy the professors lecture notes, then spend hours on  derivations and applied problems that have a right method and a right answer that needed to be delivered.  \

My art classes, in contrast, were softer events: we would do our works, then sit in a circle and critique one another.  Feedback was much more immediate and often geared towards developing a style as much as a technique.

In business school, it was all about games: from simulations to negotiations, everything was a case without a real answer: hard skills like accounting and finance were almost picked up casually in seminars while the real work was in reasoning from them towards a persuasive course of action.

Posted by Dave Hampton at 5:46 PM No comments: Links to this post 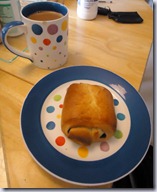 This recipe takes 15 minutes to cook; it requires 4 hours of preparation.

What the heck, it’s a rainy Sunday, cold and windy, perfect day to stay inside and play with haute cuisine. It’s a day made for making Pain au Chocolat.

These are fluffy French pastry, a square, flaky croissant wrapped around a pair of melted chocolate sticks.  With (American style) biscuits firmly in my repertoire, it was time to raise my game, and this looks perfect.  I fished around for a good recipe, settling on one from French Food @ About.com that looked authentic: more pastry and less cake-y.  There are some tricky spots in the recipe (“Fold the dough like an envelope over the butter”), but one cook’s experience and a handy YouTube video gave me the confidence to dig in.

1)  Making the dough:  This actually is pretty straightforward: self-rising  flour, salt, sugar, milk, yeast.  I always like working with yeast: it comes to life when I mix it and the smell is intoxicating.  The kneading by hand, getting from a coarse mixture to a silky rubbery ball of dough, is very relaxing after a stressful week 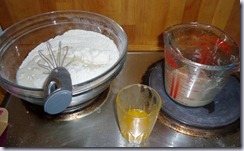 2) The first rolling:  While the dough rises, there’s a requirement to roll out chilled butter into a sheet between two pieces of parchment paper.  This is tricky, if the butter is too warm, it sticks to everything; too cold and it won’t roll out; too thin it breaks.  I got it rolled and refrigerated, rolled out the yeast-dough, and laid the butter layer over it.  The dough folds over the butter like an envelope, and it’s ready to start working. 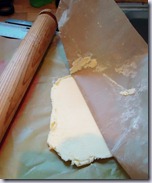 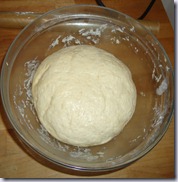 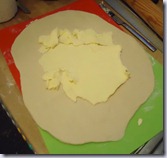 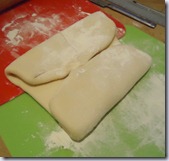 3)  Folding and layering. The layers are formed by successive folding over and rolling out, again and again, the layers forming as flour, dough, and butter interleave as the process goes along.  The trick is to keep it all from mashing together, so only a few folds are permitted before it all has to be refrigerated again. I got a good rhythm of 5 minutes folding and rolling, 30 minutes chilling (both me and the dough).  For three hours. 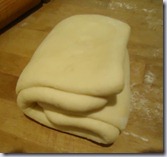 4) Rolling up the chocolate.  The chocolate bar had eight sticks, half the number I needed for 8 pains and each too large to roll up.  I wanted to cut them lengthwise, and hit on the strategy of warming the knife in the electric kettle before each cut.  It still broke the sticks into pieces, but it was close.  In the future, I would cut them cross-ways.  I rolled out the dough one last time, cut into eight rectangles, and rolled in the chocolate. 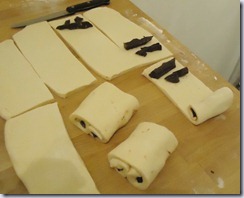 5) Rising and baking.  The finished pastries were supposed to sit and rise, but after an hour, nothing.  I put them into a warm closet upstairs and the yeast got to work: I had nice pillowy pains in 40 minutes.  Brush with an egg-milk mix and into the over at 19C for 15 minutes.  Things browned too quickly: I’d use a slightly lower heat next time. 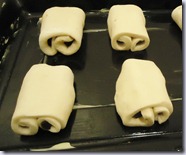 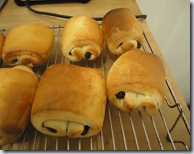 But, I was rewarded with really lovely, credible Pain au Chocolat.  Mine are nice and light, but not as flaky as the the restaurant version, a bit more like a brioche? But really good: the reheat well and I have tried freezing a few.

Chocolate Fondant is the next challenge…

Posted by Dave Hampton at 7:05 PM No comments: Links to this post

Drawings at the British Museum

What is in a tree that belongs to it specifically but which would run counter to our concept of a tree?  -- Rene Magritte 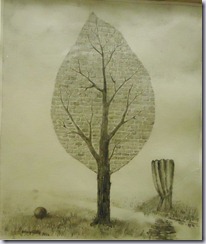 It’s a delightful koan: Magritte’s response was the drawing (right) of a tree cast as a leaf, a leaf cast as a brick wall.  The work, titled La Geante, is part of an exhibition at the British Museum, Modern Drawings: Picasso to Mehretu, through April 25.

When I first took watercolor classes, learned that I was doomed to playing with abstract blobs of color unless I learned to draw.  I took several classes through the local community college and the Kirkland Arts Center and really developed an affinity for charcoals and for Life Drawing.  It makes me more confident in approaching media like watercolor and pastels, and it’s always fun to go to an exhibition like this and see the styles and experiments of professional artists. 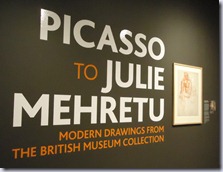 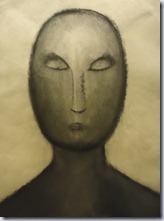 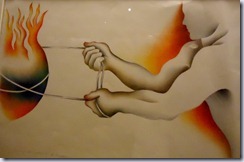 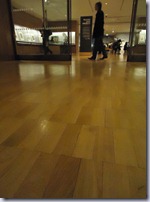 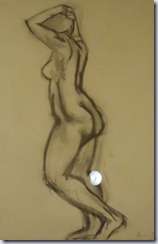 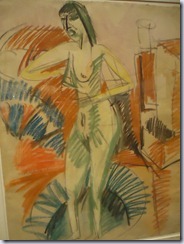 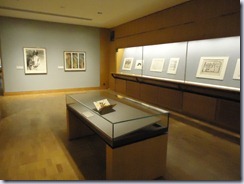 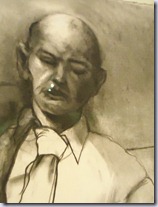 Posted by Dave Hampton at 10:59 AM No comments: Links to this post