Winter finally broke grip over Europe this week.  Friends tell me the trees are flowering in Cambridge, the umbrellas are similarly blossoming along the Maas.  People are noticeably less bundled up in Maastricht (I’ve taken to wearing a vest over a polo when bike riding) and sunglasses are starting to reappear.  It’s a shame that I have to stay inside to work, but I’m opening the windows to get some light and air through the apartment.

The world also seems to be stirring: our daughter is full of news about her upcoming college graduation, TEFAF is underway bringing the art world to Maastricht, our clinical trial sites are sending great results back  from the US, our fundraising round in the UK is closing with a 20% oversubscription.

And a Dutch cheese has won the World Champion Cheese Contest.

This one came from my parents, who still clip newspaper articles and post them all the way to Kesselskade for me.  (I should do an essay on that vanishing practice as well – it’s nice to get a neatly trimmed and occasionally underlined bit of news from the local paper!) 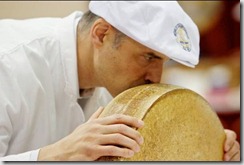 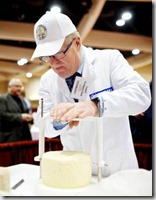 DUTCH CHEESE REIGNS SUPREME, gushed the AP.  The annual event drew 2,000 entrants from 24 countries and the results are highly regarded among cheese aficionados.  The Swiss or the Wisconsin Germans usually win these contests (no mention of the French).  But this year, the low-fat Gouda Vermeer, took the prize.  It comes from the FrieslandCampina company in Wolvegna (I had to look it up: it’s on the A22 south of Leeuwarden).

Since the company didn’t have a representative at the event: the judges woke up Piet Nederhoed, the plant manager, at 1 am Dutch time to tell him the good news.

I got him out of bed so he was a little quiet, but then he got very excited. said Dutch judge Peter Piersma.  Having called the Dutch after hours, I can attest that this is their usual reaction.

The problem now is to find the stuff: I’m snuffling around the local Albert Heijn and the specialty shops of the Wycker Brugstraat but no luck yet.  I’m in Amsterdam on Monday – any suggestions for a sop that might have it to take back to Colorado?

And the quest is a good excuse for wandering around in the sunshine.