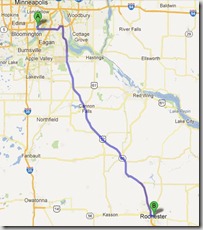 The ASA show closed out successfully and it’s time to hit the skies again, this time northwest to Minneapolis.   The occasion is a meeting with Mayo Clinic Ventures, an hour’s drive away in Rochester.  It’s noticeably more wintery in the upper Midwest: a cold wind and low clouds sweep across the prairie and the trees are already bare.

I turn south onto Highway 52, into gently rolling farmland dotted with red barns amidst fields of golden stubble.  Cell phone reception fades with every dip in the landscape, the car rocks with every passing truck (and there are a lot of them).

So, I shove office thoughts aside, turn cruise control on, and just watch the scenery drift past.

Hampton MN:  The Black Stallion Saloon flashes by, an R.I.P Hampton sign posted in front.  I try not to take it personally: the eponymous town must be going through hard times.  Greg’s Meats are next – a shame that I can’t stop and take a smoked sausage back, but customs would never allow it.

Canyon Falls: The speed limit dips from 65 to 55 for a quarter mile around Canyon Falls:  speed trap. Some things never change (although the coppery dollar coins are new to me).  The white clapboard Class Act lies just beyond, the explanation “Gentlemen’s Club” painted over the entrance.  Weirdly, outdoor picnic tables crowd the front of the building: ‘can’t imagine there’s wisdom in sitting in front of a strip club fronting a major highway for any length of time.

Zumbrota:   The landscape is somewhat recognizably Dutch=-rural, but the barns don’t sprawl, and the fields are dry-rimmed Still, I can almost imagine I’m still on the A2.   The other night in Washington, I absently thought, Oh there’s an American when overhearing a familiar accent in a restaurant.  That’s a sure sign of an expat mind at work.

Pine Island:   Take America Back appears, bold red, white, and blue lettering, then another, and another.  They are  punctuated by variants urging drivers to Pass Voter ID Laws, to Pray to End Abortion, and, above all, to Vote Republican.  Wake Up, Don’t Be Foolish,  Vote Right.  Their country is being lost: farmers, a rural way of life, a familiar social order are under threat.

I remember Minnesota as a traditionally tolerant, Scandinavian-immigrant sort of place.   We used to joke that Corporate staffers in Minneapolis suffered from “Minnesota Nice”, making it impossible to challenge one another directly.

It’s ironic and a bit sad to see the anger flow past.  The issues aren’t real, but real perceptions are being fed.  The campaigns are feeding a storm of incivility, precipitating into white drifts of bitter signs along Highway 52.

Rochester: Mayo Clinic, 4 miles.  The traffic thickens as the road arcs around a high-rise core.  Signage normalizes to commercial standards rather than political hyperbole; familiar brands replace the eccentric and unique.

One hour until our presentation, I start running through my narrative.  Speak to your audience, is always  the advice.  But which part of Highway 52 is waiting?