It’s easy to mistake the thick frost along the riverfront terraces for a dusting of snow.  It’s certainly more like January in Maastricht than in Cambridge, but still nothing like the snow and ice of years past.  The river is running a bit high and fast, but no sign of the water that topped dikes in Groningen earlier this week.  Indeed, friends tell me that the snow pack in the Ardennes, to the south, is lighter than usual.

The Christmas lights are still up, although the city is starting to turn towards Carnival, Feb 19-21 this year.  The fraternal organizations are already marching between the Wijk and the Vrijthof, kilts and brass instruments, members shaking hands with local officials on the steps of the City Hall in Markt Square.  “Vasteloavend in Mestreech” doesn’t really get going for a few weeks yet, but the yellow, red, and green lights and bunting are starting to appear. 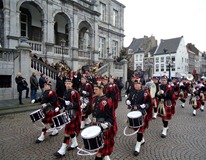 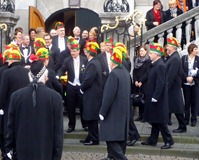 I’ve settled in to make a determined catch-up on my Dutch.  Insego had a really good series of articles on the NT2 language and social Inburgering exams this week, and I’d determined to get a an early start on the 2012 goal of passing the tests. The Welkom in Nederland textbook was, curiously, not available in Selexyz Dominicanen, my go-to bookstore in the city, so I had to order for UK delivery.  Otherwise, I’ve been putting in a solid 2-3 hours a day of reading newspapers, working the lessons, talking with neighbors, and generally getting my head back around my Dutch.

The car needed it’s 40K service, an engine light had started flickering and I had lingering concern about the blowout in Dover a month ago, but the dealer gave everything a thumbs-up. 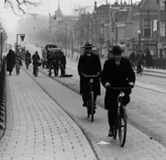 The bike park has instituted a 0.50p / day fee for dropoffs, I’ll have to start leaving mine in the outdoor park or fees will quickly outstrip its value.

Even with the cold, it’s nice to be mobile on the bike again: YouTube has a short documentary on How the Dutch got their Cycle Paths, which is pretty good if you’ve ever wondered.

I’ve also returned to daily exercise, the Health club blocked my codes with the New Year so that they could be sure that I would check in with an instructor (of course, none were available).   It reminded me that my postage stamps (postzegels) might also be out of date (kapot). 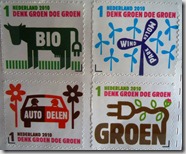 Dutch postage stamps come in three varieties: Nederland, Europa, and Wereld: you put zone stamp on up to 20g and 2 stamps up to 50g for wherever your letter is going.  It’s a pretty simple system, but with all of my stamps dated “2010”, I was concerned that I might need a supplement.  No worries, though: if the stamp has the number 1 in the corner, they can be used any time. 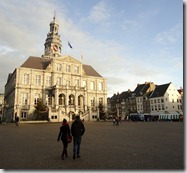 I hit the Jumbo and AH for a quick grocery shopping (boodschappen), picked up a bottle of wine for a dinner invitation tomorrow,  gave some TLC to my Olive tree.  ‘funny how quickly (yet another) familiar routine settles in.  I’m feeling a bit sad that several expat friends repatriated this winter; it leaves a gap in my thin social fabric as I reconnect with friends this weekend.

Posted by Dave Hampton at 10:38 PM 2 comments: Links to this post 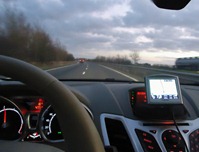 ‘twas a cold cloudy evening headed down the M2 towards the Dover ferry docks.  I had booked the 4:00 boat (vier uur’s middags, I drilled), but meetings had run late and there was no way to make it.

So I accepted Maastricht by Midnight (twaalf uur's nachts) and set the cruise control.

It’s been a good week; we’ve been meeting our investors, getting their advice and collecting funds for the next year of CamStent’s development.  In contrast to the visionary pitches last year, we have some good data to share and an experienced team that presents with knowledge and confidence.  We’re a good portion of the way towards securing the further investment that we need, and the

discussions are helping to bring the business into sharper focus.It’s a good feeling that thing are on the right track.

A friend asked how life would change if we were ultimately successful: the product meets it’s goals, improves patient outcomes, saves hospitals money, is acquired by a global manufacturer / distributor.  What is the impact of success?

Clearly, the rent and the health insurance would be covered forever: the two bottom elements of Maslow’s Hierarchy (right).  But would the ripples affect anything, everything above? 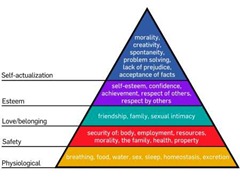 For some, success triggers a quest for a better relationship, for the respect of the famous or well connected, for aspirational crusades in sport or politics.  For others, it strengthens commitments to family and philanthropy.  Many of our angel investors are doing it right.

I’d like to think that it wouldn’t change my beliefs or values.  Nor would I stop caring about the people and causes that matter to me today.  The biggest change would likely be time: what would I do with the two, three days a week that are now spent on maintaining and operating the business. 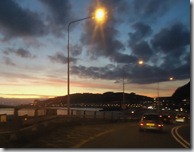 Less running to the Dover docks and across the A16 through Northern France, the E40 through Belgium.  Less time on the junk ferry that DFDS puts on the Channel runs in winter.  Less effort chasing VAT refunds and lowest-cost airfares on New Year’s Eve.

It’s a nice train of thought.  The alternative, being unsuccessful, would also impact every level, but that doesn’t bear too much thought.  Especially on a week so full of possibility. 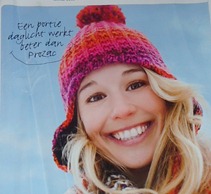 Famously, Dutch women are the happiest in the world.  This may be due to the lightened state of Dutch society, or to the ease of taking part-time work.  A cover story in a recent Dutch medical trade journal suggests that Prozac and it’s kin may also play a role?  It’s slightly reminiscent of Ms. Bachmann’s famous Newsweek cover – if I saw this facilitated smile, I’d probably steer clear. 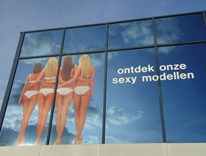 Then there was this come-on-in as spread across the second story of my local car dealer.  It made me smile, but I wonder how long it would last if it were posted in Fort Worth or Minneapolis?

My favorites are still the Bavaria ads on television with Hugh Hefner and Mickey Rourke.  Or almost anything from Centraal Beheer, the insurance company.

Posted by Dave Hampton at 6:24 PM No comments: Links to this post

Email ThisBlogThis!Share to TwitterShare to FacebookShare to Pinterest
Labels: Media and Culture

My first full week back in Europe is behind me, and its left me feeling a bit more stressed than usual.  Not at all the intent after two weeks away!  I ran through the usual list of excuses: I fell behind ahead of the holidays, I took a week off during the holidays, I fell out of touch after the holidays, I caught jet lag.

None seemed to fit.

I wished for Coach Steele’s handy List of Excuses for Missing Swim Practice that he handed out to our swim team in High School:

‘There was always something that fit.

On reflection, though, I’ve decided that there are two nominal problems, both connected to slipping back into expat life after a couple of weeks in repat life.

First, two weeks back in a familiar setting resets expectations for how easy it is to get things done.  For two weeks, I’d drive to the store, products were where I expected them to be (mousetraps, for example, are in Housewares at Safeway, not at the pet store), costs were denominated in familiar units (and at lower prices), I understand what people were saying (okay, people still don’t always understand me).

Coming back into England and the Netherlands, life became more deliberate, less intuitive.  I need to remember to think harder about how to say things, take more patience with the steps needed to get things done, accept that it will take more time to find things I need.  It’s not a bad thing, but it’s an unfamiliar friction, leading to a sense that I’m falling behind.

The other is that a break is also a reflection.  With family and friends, I’m talking about the year, the things that went well or poorly, the plans and hopes for the coming months.  I’m thinking about what went well; what needs to change.  Lists, then Resolutions follow.

An hour a day of Dutch practice.  Catching up with an email to a friend a few times a week.  Weekend trips once a month. Seeing my parents more often.  Getting to bed by 11:30 on weeknights.  Exercising 3 times a week. Reading more; Charcoal life drawing.

But the realities of expat business life haven’t changed.  There are things that must get done or the work doesn’t go out, the money doesn’t come in, the fundraising doesn’t start, the experiments don’t close.

I did get to exercise three times, started a new book, sent some emails, fell into bed most nights before the clock struck twelve.  But the Dutch lags, weekend travel is still too aspirational, charcoals are tucked into a lower drawer.

And so, as the second week starts, I’m taking stock.  Again.

The five biggest jobs are done (well) and the remainder are manageable.  I’m adapting to the rhythms of weekday shopping and left-side driving again.  I’m back; I’m equilibrating.

The temptation to thrash harder, to move faster, to shovel the work aside to make more time is there, but I’ve mostly resisted the call.  It’s a seductive idea for catching up; but I know, in reality, it will throw life even further out of balance.

But it’s as true about achieving a balanced life as achieving a successful one.  I gotta wanna do better, year by year. 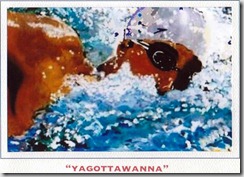 PS:  I am amazed to find that my high school swimming coach, circa 1968, Bob Steele, is still kicking around and doing motivational work.  Wow!

And still selling the same slogan he used to chase us up and down the pool with.

Posted by Dave Hampton at 12:51 PM 2 comments: Links to this post