I woke up a couple of weeks ago with a stabbing pain behind my left shoulder blade, shooting pain up my left arm and tingling in the fingers.  Easily identified with the Ulnar nerve distribution (grad school training comes back easily), I expected that I slept on it wrong, but, to be sure I wasn’t having a heart attack I went to the doctor.  He confirmed that it was a pinched C8 nerve in my neck: take some ibuprofen and see the PT about it if things don’t improve.

Those pains only accumulate as you get older, my mother offered.  Since she gave me a sticky cinnamon bun to to chew along with the advice; I accepted the distraction sweetly.

The problem is that these distractions carry consequences.  The occasional tingling and weakness is worrisome (although it’s slowly getting better), it interferes with sleep and work, its causing me to grasp things in ways that favor the remaining fingers.  So I have to deal with something I always took for granted, consciously setting pain aside and taking time to secure my grip before moving.

Stone Bridge Biomedical has it’s web and mail services hosted with Microsoft’s Office Live Small Business.  This month, Microsoft simply turned the servers off and rolled up the service.  I first found out about it as my mail client stopped working, then my web site went down.  Customer support simply said “You were warned: check your junk mail folder,” and their handy migration guide led to more expensive and less reliable third-party tools that were overwhelmed by the legions of people caught by surprise.

Actually, there are lots of similarities.  I was caught by surprise by the sudden loss of function at my sites, and spent hours ruling out possibilities before spending a day consulting a professional.  The diagnosis requires time, money, and effort to cure, and resolution will be slow in coming.  Meanwhile, more important things have to hang while I deal with the issue handed to me, through no fault of my own.

I especially dislike the tag-apology it reminds me of what National Rail UK says, insincerely, every day as trains are delayed.

This is not the first issue with Microsoft recently.  In their ongoing effort to become cool again, they have released, then discarded, media players, utilities, phones, games, operating systems, web services, and, now, the blogging tool that I rely on.  Each entanglement and abandonment creates new problems, adds expense, and eats at my time and loyalty.  I’m looking with dread at the Metro-style Windows 8 touch interface: I touch-type commands and documents all day and whizzy tiles and always-on social connections won’t make me productive.

Microsoft is fast becoming the main source of pain in my day and, hauntingly, one who’s aches are indeed accumulating as I get older.

Posted by Dave Hampton at 5:50 PM No comments:

Email ThisBlogThis!Share to TwitterShare to FacebookShare to Pinterest
Labels: Health and Fitness, Society and Technology

A little wisdom and its consequences 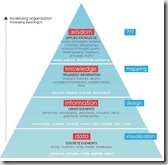 I used to have a hierarchy of definitions mounted on my cubicle wall giving the definitions of data, knowledge, understanding, and wisdom.  Our systems captured data, but our challenge was to interpret it, place it into context, and to give it insightful and actionable meaning.  Wisdom (poetically, de wijsheid in Dutch, where it’s: a state of being) is the ability to bring experience, knowledge and judgment together to act correctly and effectively.

So I read with interest the article Older and Wiser in a recent Economist, examining the question of whether Age brings Wisdom.  Their conclusion, based on a study at the University of Waterloo, was that Americans get wiser as they age, while while Japanese scores were more age-independent.

Almost more interesting was the psychological definition of “wise reasoning”:

I’m surprised that there is a definition, and pretty happy with the qualities that the boffins are proposing (“Being able to interpret  events in their proper context” would be a good addition, along with “Understanding the motivation behind people’s actions”). Passions and emotions are (purposefully) excluded.  Reflecting to my own life, I like to think that these maxims are foundational principals for interacting with the world and resolving interprersonal conflicts.

It’s been put to the test this past week.

In one instance, a stock transaction at one of my companies has become hopelessly entangled in the individual fears and greed of the participants.  This had led to a widening ripple of frustration and concern as more and more spectators get sucked into the process.

In the other, a revision of the governing agreement between founding members of another business has resulted in a change in wording that partners see as threatening and the authors believe is innocuous.  The lawyers are now involved in spinning the language.

In both cases, I’ve approached the negotiations with as much wise reasoning as I can muster.  In particular, I have tried to resolve rather than highlight conflict (usually though clarifying points of agreement and exposing the underlying issues that remain, always with recourse to facts) and appreciate the kernel of truth in both sides of the argument.

I expect acknowledgement of common ground and constructive focus on bridging gaps.

I am starting to believe that a mediator acting from “wise reasoning” paradoxically frees people to act on their worst impulses.  In part it may be because it allows them to vent passions without consequence; in part it may be to pull the compromise point in their direction.

I have met fire with ice so far, but may change to an uncompromising stand (eg: stopping the process and letting consequences fester until people come to their senses) or setting up a gladiatorial arena (eg:  let the two most strongest opponents duel it out between them).

It’s a bit discouraging, and probably reflects why the world is ruled by politicians rather than philosopher-kings.  People can trench into achieving particular goals with strong convictions, com what may.  The resulting process has little to do with wisdom, so may not be amenable to solution as though everyone is a rational actor.

Sometimes, Harvard Law holds: Under the most carefully controlled conditions, keeping all variables within specifications, the organism will do as it damn well pleases.

(Webb’s Corollary, If the organism can't do as it well pleases, it will expend its energy 'stuffing up' what the controlling agent wants.)

And that remains wijze uitspraak, a piece of wisdom.

Posted by Dave Hampton at 3:51 PM No comments:

It’s been a couple of weeks since there was time to sit and write.  Not a lack of thoughts, my notebook has lots of notes in the margins about things I want to explore, but a lack of time.  The events competing for attention are good things, but, in the aggregate, they take their toll.

Anyway, as the weather suddenly bursts into summer in the UK and long holiday weekends accumulate ahead, it will be a good chance to catch up with my events and fellow expatriate blogs.  A couple of quick notes to get rolling:

-- Eurostar has restored  Any Dutch Station to it’s selections for the Netherlands, reducing the price of travel to/from England by about 40 euro over selecting the Any Belgian Station or Brussels destinations.  It makes no sense, but it saves about a third as peak summer travel season approaches.

-- Rules for leased car deductions are changing in the Netherlands on July 2012 to encourage the use of more environmentally friendly automobiles.  This has caused a rush to exchange cars: my dealer (confirmed by a separate leasing company) said that they could no longer confirm delivery of fuel efficient automobiles by the deadline.  It’s also cut the amount of negotiation: I got the price pushed down 10% but no further.

--  Landing in Seattle on a recent Delta flight, the crew announced  that we could see the local Ikea as we landed and  encouraged people to stop and shop.  It’s an annoying bit of

product placement, likely to come to a RyanAir flight shortly.

-- And, on that theme, any parent who buys their children tacos and burritos to eat on the plane should be forced to sit with them.  The smell, the grease, the mess in the seat pocket was terrible.  I don’t know why the airlines don’t insist on flight friendly fare if they are going to allow people to bring meals on board.

-- The US seems as enthusiastic as ever about achieving greater government cutbacks, even as European voters are rejecting politicians who implement similar austerity measures.  It will be interesting to see if there can be a real debate about the merits of taxing the top 2% vs. the bottom 20%, about whether a dollar spent by the government is more wasteful than a dollar spent by an investment firm, about how to educate students to stimulate creativity and competitiveness, about whether there should be a balance of power between owners and labor.  Europe’s policies seem more correct to me, but the American middle class won’t understand until they feel the true pain of the Rynd-ian policies they are backing.

Posted by Dave Hampton at 5:12 PM No comments: