Autumn has made a predictably early arrival across Europe.  Even though the autumnal equinox passes this weekend, officially ending summer, if feels like the seasons are jumping ahead without pausing between spring and fall.

In Cambridge, this means that the ivy is turning red along St. John’s college and the blankets are out in the punts along the backs.  Suitcases clatter along the cobblestones as students

return to classes; lesson planning is already well underway for the ST4 course that I teach.

“Fencepost scheduling” is back in force: I get a call and enter an appointment in my diary, then schedule travel around the events like a weaver pulling weft over warp.  Thus, Friday’s work ends with me pulling onto the 4 pm Eurostar for the trip back to Maastricht. 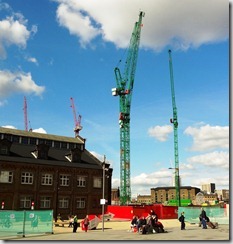 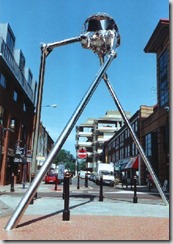 The short stop in London Kings Cross is punctuated by green and red cranes against blue skies, modern day Martians standing over Wells’ London.  (I found that there’s a Michael Condron sculpture in Woking commemorating the invasion).

I bury myself in De Opmaat, my Dutch workbook beneath the Channel.  My docent at Arcus has been sending increasingly frantic note that she needs my passport and bank details to sign me up for an NT2 exam It’s absolutely the goal, but will need to be on my timetable, not theirs.

Arcus cut me off of  their computers six

months ago and ignored notes asking to re-establish access.  So, I’ve been spending time with workbooks, Dutch podcasts, local newspapers and my “Dutch Buddies” daily to continue progress.

And it’s coming along – vocabulary slipping into place the finer points of grammar becoming clear (adjectives with and without –e this week).  I still need more practice, though, more face time.

Changing trains in Brussels Midi at sunset.  I take a business phone call from Seattle, they joke that I’ve got more phones than Jason Bourne.  Little do they realize that I’m standing in a station with an earbud hanging, imitating the Waterloo sequence.  The

Zuidtoren catches the colors, a pillar supporting the sky above the train station.

I’m guessing I can be in Maastricht by 8, but the intercity ambles slowly across Belgium to Liege, arriving at 8:30.  The short connection, filled with Friday teens headed north, rattles and laughs raucously across the border.  The conductor doesn’t even try to check for tickets.

My olive tree has put out a few new buds to greet me: it was in sad shape after getting scorched on our one hot August day.  I give it some encouragement and drop next door for a biertje.  The bartender offers the bier van de maand, thick and red.

I’m reminded again of the ivy at St Johns, and of autumn (herfst).

Posted by Dave Hampton at 9:38 PM No comments: Links to this post

I’m back in England for a few days before heading on to the Netherlands.  The 15th MedTech Investment Europe conference is going on at the King’s Fund in Cavandish Square.  It’s a networking affair for high-net-worth angels and startup companies looking for money, leavened with expert discussions of markets, exits, and risks.  I was asked to lead a panel discussing Healthcare Innovation, then was asked to chair the entire conference, so it was a nice chance to frame some ideas for audience discussion.

Aside: The organizers put my academic credentials ahead of my business ones, which resulted in several participants asking if I could help get their child into Cambridge.  I wish…

The American election was thrumming in the background, with Mitt Romney’s video capturing the news cycle:

“47% of the people are dependent on government, believe they are victims…and pay no income tax”.  I’m amused to find that, as an expat who pays no US taxes and takes government help to start my business, I’m among the 47% that Mitt writes off.  I commented on Facebook about this and got a good peppering of replies from friends on the right and left, thoughtful and probing.  The FT also had a good takedown of the Governor’s comments.

In some ways, I should be in Mitt’s natural constituency.  I’m a small business owner, earning enough to self-fund an expatriate lifestyle, avoiding high 35% US corporate taxes, believing in the returns to both the individual and society of hard work, individual creativity, and financial initiative.

And there’s no question that I’m disillusioned with President Obama.  He’s compromised on principle, caved to pressure, utterly failed to make the case for causes that he eloquently and passionately spoke about during the campaign.

I’ve registered as an Overseas Voter (if you haven’t, the OVF can help) and have received my ballot by email from my home county (still amazing that I can Internet-vote by absentee.  My Dutch friends say that if they can’t vote in person, they must give their proxy to someone else to vote for them, an even more curious arrangement!).

But I just can’t vote for Mitt.

One reason is the sad social state of the Republican party.  As much as it’s pro-business policies might appeal, it’s cultural intolerance, parochial viewpoints, and and loopy slogans are both embarrassing and anachronistic.

The other is that I believe in practicing civic virtues of compassion, conservation, and investment, establishing infrastructure and promoting cooperation that drives progress and ensures opportunity and fairness.

Having both something to be against and something to before tips the balance left, perhaps against my own self-interest, and into the 47%.  I won’t vote for the President no matter what, but I haven’t heard anything yet that changes my mind.

Posted by Dave Hampton at 11:40 AM 4 comments: Links to this post

American’s learn about the Second World War through the lens of our own mythology.  From early isolationism through the attack on Pearl Harbor, through the scale-up of production and mustering of troops, ending with decisive battles and the Marshall Plan.

My real knowledge of day-to-day life in Occupied Europe is pretty thin as a result.  Dutch friends have told me their family stories and I’ve gone back to read more detailed histories of the period.  In Arnhem the ring road is filled with monuments and reminders of the very difficult war years.  I especially find the personal stories moving and extremely saddening.

I similarly knew little of the occupation of Poland before my visit to Krakow.  To learn more, we decided to visit Schindler’s Furniture Factory, just across the river from the Old Town Center.  I haven’t seen Spelberg’s eponymous movie, the Holocaust is profound human tragedy, not entertainment, so I really didn’t know what to expect.

The museum is a chronicle of the years of Occupation, from before the fall of Poland through the end of the war.  It’s mostly told through artifacts, letters, first-person interviews, and reconstructed environments to give an intense feeling of ordinary people daily trying to hold onto their lives and families.  It takes about three hours to walk through it all, reading and reflecting.

In many way’s, it’s like watching the Titanic sink:  Things start badly, get steadily worse, and then end tragically.  It is remorseless, there is no light to the narrative other than glimpses of resistance and ingenuity that salvage occasional lives.  Schindler himself is only fleetingly glimpsed, I still didn’t know what his famous List was until I looked it up on the Internet afterwards.

Among many affecting areas was a reconstructed University lecture hall containing the words of a German commander taking the lecturers in hand.  It’s so precise and stark: I can absolutely imagine the spirit that drive their initial resistance and the utter hopelessness that this speech must have driven home. 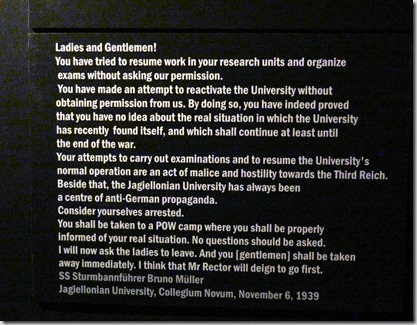 As happens at international conferences, our group attending the museum had German, Dutch, British and American participants.’  In the conversations afterward, we all struggled to talk through what we’d seen. What would an individual with a family do, torn between fleeing (to what) or enduring (to what)?  How did the Polish Occupation differ from the Dutch one?  How could the Germans reconcile their national character, their own family heritage, with their past deeds?  Why didn’t the West act sooner?

I didn’t go to Auschwitz to witness the end of the stories.  But I met an American who’s family emigrated from Poland near the beginning of the war.  They had been dispersed and lost touch, but he’d assumed that they’d all survived.  Now he found the names of five of them at Auschwitz.

It as, and remains, an unspeakably tragic point in history.

Posted by Dave Hampton at 1:15 PM 3 comments: Links to this post