I received a new meme from a colleague the other day, they are putting together an e-book for aspiring health-science entrepreneurs and were soliciting contributions based on our experiences.  The remit was

It’s a tricky assignment, mainly in trying to avoid clichés and exceeding the word limit.  My response (finally) went in as follows:

Bacterial biofilms are a persistent problem for medical devices used in hospital environments, causing infections and mineral blockages that impact patient health and drive up treatment costs. Biofilms form as naturally occurring microbes colonize surfaces in contact with patients, especially in catheters, respiratory tubes, and orthopedic implants. CamStent is developing polymer coatings that can be applied to device surfaces to prevent colonization, interrupting the infectious process before it begins. The company was formed in 2006 in collaboration with chemists at the University of Sheffield and is now preparing for clinical trials of its lead product to prevent urinary tract infections.

Pursue consequential projects with determination and enthusiasm. Have goals that extend all the way to first revenue but execute in incremental steps, achieved at regular intervals, each adding value and reducing risk. Hire capable people who challenge your thinking but who you still look forward to spending time with each day: hire a strong CFO first. Stay virtual, using resources flexibly and reserving cash to respond when problems or opportunities arise. Be confident and persistent: successful development or fundraising often means playing long enough to win. And have a life beyond the business, cultivating people and pastimes that delight you.

Posted by Dave Hampton at 3:12 PM No comments: 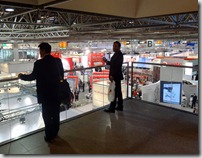 Each year, the medical deice industry comes together in Dusseldorf at Medica.  It’s a gigantic trade show, the biggest I know, where device manufacturers from around the world meet distributors, hospitals, and agency representatives. It’s raw capitalism: no science, no instructional seminars, no market research. Just 17+ gigantic exhibit halls filled with backslapping deal-making.

For us, this as a chance to talk with companies sourcing products that we could improve; companies that might distribute the result.  There were luncheon discussions of business models and partnerships, afternoons exploring new monitors and interfaces.  The country-sponsored booths were delightful: it’s great to see smaller companies being brought forward with their new ideas.  There was the occasional delight of finding  a vendor with a really good insight.

There was also the disappointment of one who asked for a meeting and then drifted, or of who thought they had a unique idea that was, in fact, replicated a hundred times over among the endless aisles.

It’s a vibrant and delightful industry: this show is all about the energy and creativity that it’s participants bring  to patient care.

Even if it gets a bit goofy sometimes. 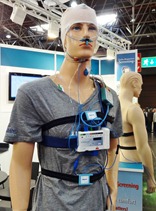 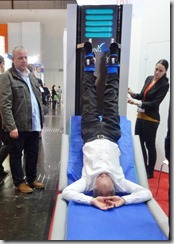 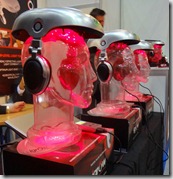 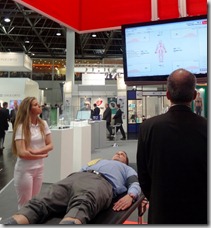 Posted by Dave Hampton at 8:59 PM No comments:

After the ball was over

I was putting away the study materials this evening, finding the surface of the table again beneath all of the Dutch books and study sheets.  The green  book, the red book, the grammar book, the dictionary.  It all served pretty well; 'going forward, it will be important to keep this momentum.

Besides, I’m actually enjoying reading more and more of the Metro each morning on the train.

Lezen en Luisteren was today, two hours each for the NT2-I test in Eindhoven.  The reading test was relaxed and enjoyable – the texts were interesting and the 40 multiple-choice questions straightforward.  Workplace issues again dominated, Repetitive Stress injury, smoking policies, and, my favorite, the virtues of a 32 hour work week.

Imagine if workers had time to spend the money they earn, time to study and train and improve, time with family, time without stress.

Consider, if a bakery has to make 30 cakes, is there greater social good in having six workers make five cakes each, or five making six each?

It was interesting to think about – the sort of argument that we should have, conservative vs. progressive, in the US but never do.

The Listening test was less about listening than about strategy.  The speaker reads a text setting up a scenario: a woman is getting a new kitchen, or a man is describing work in a travel bureau.  There is text describing the question to be asked and three possible answers.  There is a 20-second period to study the question and answers, then there is a fast, jumbled interview to listen to.

Essentially, I would think about how to recognize any of the three answers, then listen for that part of the interview.

So, for example, the question “How does the travel agent know which destinations are popular”, had three possible answers: Customers, Destination countries, Travel Agent Organizations.  The response described the various surveys that are available through professional societies, no mention of Landen and only a brief reference to Klanten.

At the end, I think I probably did well on Reading, then Writing, then Listening, and, dismally, Speaking. It will be weeks before I know the scores (and I’m under no illusions), but it leads to a new dilemma.

I’m close to passing on three of these, although there’s a huge gap with Spreken.  Ego is already chanting You Can Do This…  Imagine if I did.

But, seriously, I don’t need this.  I need A2, a permanent visa, a path to running my business with more certainty.  The safe and sane course is to take the Korte Vrijstellingstoets and, if I fail it the Inburgeringsexamen.  And never to go near NT2-I again.

But where’s the pride in scraping across with a dishonorable A2?

But where’s the honor in bashing myself against NT2-I out of pride?

I definitely need to get a grip: two full days of language exams, weeks of studying, has left me a bit fried.

Metro published a lovely little article that I was reading on the train this morning about how to become a miljonair:

This is a toets that I can pass.

I’ve been laying into the Dutch lessons over the past week.  There’s not really any expectation that I can pass the NT2-I test, but I’m going to give it my best effort.

In some ways, it reminds me taking the driving test when I was 16.  I aced the written part, but the road test was pretty grim first time out.  I signaled wrong, hit the curb parking, generally got flustered and defensive in traffic.  The second time was almost perfect, ‘third was the charm.

We are allowed three tries at the Dutch Proficiency exam each year, so there’s similar stakes here.  Pass what I can, get acquainted with the routine, be properly ready the next time around.   So, Day 1 (schriven, spreken) rolled in today.  And, as with the driver’s test, it was mostly good, only partly disastrous.

The test is administered at an exam center across from the Eindhoven rail station.  Check-in was gratifyingly straightforward: join the right line and get a locker for your computer and mobile phone, then wait to be called.  There were lots of trashy pulp magazines in Dutch to read.   There were also a lot of students, mostly for the inburgering exam, overwhelmingly female, middle-aged, scarved, and optimistic.  I suspect that most prepared more single-mindedly than I did.

Again, I regretted that I was among the four taking the NTT2-I exam and not the A2 as I should have.

We got called in at 10 to begin the writing test.  There were two sub-tests, each an hour long with a 10 minute break between. I was surprised that both a Dutch and Dutch/English dictionary were allowed.  The proctor spoke flawlessly clear Dutch – I understood every word.  Confidence was building

The first test was short answer, most of the 13 questions were relentlessly focused on finding and holding a job.  Write an email to a colleague, explain an absence, send advice to the director, ask a neighbor to *please* give her cat to the vet next time she goes on vacation.

The second test was essay: only three questions.  Sort out a vacation schedule where everyone gets three weeks off in summer but there must be two people I the store at all times (I was still marveling that there was a mandatory three weeks) .  Write an article for the newspaper about your work as an animal keeper (using all of the pictures), telling what you find best, worst, and most interesting about your job.  Explain to the director why you are too busy to finish your work (using the pictures) and propose a solution.

The nice thing about the writing test was that I was actually pretty close to being able to do it.

Not so the 1-hour speaking test an hour later.

I expected that we’d be asked to parrot sentences: instead we were given 13 short and 10 long scenarios.  Each had a question followed by 20-40 seconds to respond.  I understood the scenario and the question without a problem, but framing and composing an answer was completely beyond me in 20 seconds.

Helplessly, question after question streamed by.  I was acutely aware of the woman behind me speaking and the proctors listening.  I was failing big-time.

I had thought that the lady behind the desk with headphones was getting ready to have conversations.  It turned out that they were only asking me to check that my name had been properly recorded.

I was completely freaked and only wanted *out*.  Nu.

In the end, we sorted it (in Dutch), but I was upset with myself and with the whole process.   It’s clear where my future study has to focus: korte vragen en antwoorden.

Two more tests tomorrow: lezen en luisteren.  Those should be fine, fingers crossed that I don’t do something foolish.

I have to reflect that, as Americans, we have absolutely no idea of what it means to be an immigrant.  And that’s ironic for a nation that was founded on the idea.

At least I have my 2013 IND process complete, and (during the lunch break) got my new residence card in hand. 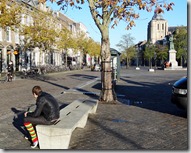 Yes, it’s a lovely herfst weekend, leaves still flaming in the trees, although I’m inside doing marathon Dutch study for my language exams in Eindhoven tomorrow.

And, yes, it’s coming on Kerstmis, so every zondag is koopzondag for the month.  The music played late last night  as a cold breeze blew through the apartment.  The painters touched up the windowframes and insisted on leaving them open to dry.

Yes, of course it’s Sunday morning, but consider that there’s bier on tap in the Vrijthof at 9:30 am, tickets for sale langs queues leading to the toilets, a soundstage warming up against a cool blue sky. 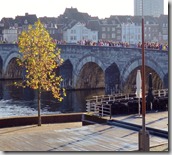 The bridge is filled with people in Carnival yellow, red, and green, long queues along the way to the Square, too many rebel yells from the face-painted fan-boys.

So, I’m out to practice my Dutch (even though having conversation with drunk folks is unlikely to be productive in helping me to speak beter Nederlands). 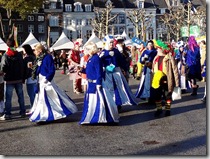 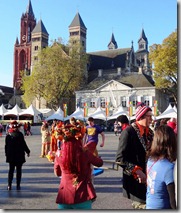 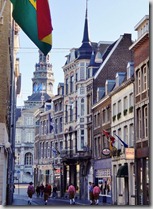 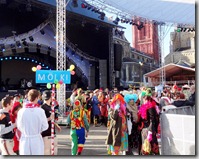 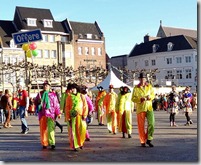 Posted by Dave Hampton at 11:11 AM No comments: