This message, projected on the wall of the train station in Eindhoven, gave me both pause and a smile.

Pause, that such a philosophical idea would show up, randomly, in a train station.

A smile, that I could read it.

I had a perfectly awful Dutch session with my tutor yesterday.  I’ve been on the road too much, backsliding on both vocabulary and grammar.

I really hate the feeling when I arrive with a head full of ideas and a mouth full of rocks: I’ve become more diligent about starting to write and to speak with friends and pulling gut y list of irregular verb conjugation on the train.  I think that I need to  set a date for the test and work towards it.

I’m owed about a quarter-million euro by a vendor with a sudden cash flow problem. This blocks payments to my subcontractors which sets me thinking about whether I can seize and monetize the work I’ve done as collateral.

In the US, it would require me to force an involuntary insolvency on my creditor, followed by bankruptcy proce3dings, finally an auction of assets, all taking about a year.  If, however, I file in the Netherlands, a court will issue a writ of summons pretty quickly, hold an expedited procedure, and issue a declaration that my debt is valid within 8 weeks.  Then a further month allows me to give notice of foreclosure and seize the asset, perhaps four months all told.  I likely couldn’t market the completed device in the US, but I could take investment to develop it for European customers.  Seek good help if you try this, but there are good guides to the basic process online.

No, this isn’t something I’d ever thought I’d have to learn <sigh>.  But I like the way the procedures work here.

On the way north to visit Advocaat Hans, I got a taste f the free WiFi service being offered in newer NS coaches.  It was really nice: like the St. Pancras service in London, it is free, fast, and reliable.  I don’t think that it dropped signal at all, even through the wilds of the Groene Hart.

UK retirees who move to a villa in India.   It’s a good expatriate film with a stellar cast, and it says interesting things about expectations, struggles to adapt, and the process of fitting in.  I wish that the movie had the courage to finish the stories that it began, forcing the characters to find their life’s purpose, meaning in a foreign culture, and personal identity.  Instead, everyone reverts to their original nature just as they started to get comfortable with change.

There are words in Dutch (and English) that are untranslatable.  Gezellig is the classical example in Dutch; I struggle with “Engineer” or “Automobile Chassis” from English.  I came across a blog posting which I now, unhappily, can’t find that noted several more: smullen and pretoogjes.  I would credit the author but have lost the bookmark – his thoughts on how “invisible Dutch” words enriches thinking as well as vocabulary are interesting, both philosophically and culturally. 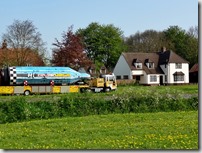 And we’re either setting up the new UK Missile Defense system outside of Cambridge, or the Bouncy Castle can’t be far behind…

Ah, and the Mondrian quote to ponder as you walk in the sunny countryside today:

Convention, a kind of memory, is the greatest obstacle to enjoying life and art.