Just a little time today to sit and think between calls and assignments.  I’m feeling a bit like two icons from Cefalu:  a crowded mind and a fleet footed narrative. 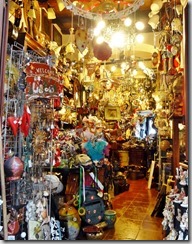 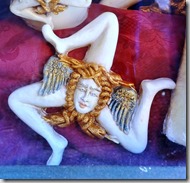 Wisdom from the FT’s Michael Skapinker

Learning a language requires effort, memorising vocabulary, looking over the grammar, watching television, reading newspapers and talking to real people rather than just two hired participants. The learner has to take responsibility.

Successful language acquirers do something else: they don’t worry about getting things wrong or making fools of themselves.

If you haven’t already…

Today would be a good day to back up your residency and travel documents.  I scan my passport, residence cards, and driver’s license, front and back, each year into a single .pdf document and e-mail it to myself.  That gives me a reference that is accessible from anywhere, any time, if there is an emergency.

He notes that great ideas grow in great soli: the growing Commons that we all draw from and (should) give back to.  It’s one reason that I teach and mentor, others publish or preserve, donate or fund.

But you have to help maintain the ecosystem.

This is a construct of the FT, signifying “a member of the global elite with a reverence for innovation, a blind faith in capitalism, and an assumption that globalization is beneficial and unstoppable”.

To that, I would add a distaste for governments, a disdain for media, and remuneration wholly decoupled from talent, effort, or social contribution.  Like (the very different) Tea Party Conservatism,  It’s generative and constructive as a coherent point of view that identifies problems and suggests potential solutions.  But it’s also brittle in its purity: volatility, competition, and disruption require social systems with resilience to maintain continuity.

I was listening to a lecture about how change is a necessary aspect of living things: they either adapt or die in a competitive world.   At the same time, I was gazing across the dunes and grasses of a beach that has been a stable living thing for millennia.  That would seem to be the greater truth, that living things adapt to maintain homeostasis, individually and as ecosystems.

Davos Man is an adaptive experiment, not the next stage of social evolution.

Posted by Dave Hampton at 8:43 AM No comments: Links to this post

I continue to grow into my Nexus 7, ‘still far from my goal of replacing everything in my shoulder bag with apps and content on the tablet, but making steady progress.

And learning as I go.

I noted previously that the tablet is pretty worthless without a connection.  Books and magazines can be cached, but nearly everything else requires connection to the cloud.  Travel means 3G connectivity, and that means a good data plan.

I use RoamLine, international coverage at 0.39 euro / MB.  The connections are seamless and fast: technical performance has been excellent. But the weekly billings quickly add up.  Costs escalated from 10 to 30 to 70 euro through three successive weeks in February with each 100 MB adding 40 euro.  Business Traveller recently listed the costs of common activities: 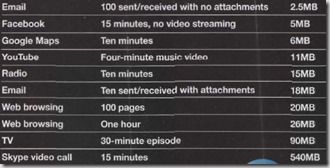 My biggest hogs were unintentional: app downloads, newspaper updates, Ingress.  I’ve put a much more careful watch on when my 3G is on, rather than the default of

“whenever WiFi is off”, and have forbidden news apps from using it.  I’m also looking for local flat-rate data-only plans to replace my PayGo plan in the UK and Netherlands.

I got notice this week of more cloud services shutting down, reminding me to archive my content before they are deleted: one for photos, one from Microsoft.  This is my second biggest issue with cloud storage services (after mobile access): they close up shop if they can’t make money.  The Chromebook ”cloud everything” model just won’t work if storage migration can’t be resolved.

I found that my King County, Washington public library allows e-books to be checked out: it’s a wonderful service (and yes, I still pay property taxes to support it).  I already have a queue waiting, and it’s been great to simply tap in a hold when I find a good book review.

I’m less thrilled with Amazon’s e-book rental service: there are constant nags to “renew or buy”, and the costs quickly grow to where I simply “quit or buy ”in frustration.

I use NetVibes to aggregate blog feeds and some news content: the mobile app is not as good at summarizing content, so I started casting round for others.  Both Google Currents and Flipboard are fantastic: rich content, simple navigation, easily configurable.  I’ve copied my NetVibe feeds to Google Reader so that they appear in these aggregators: the only issue is the occasional bump into a magazine’s paywall when following links.

In general, magazines don’t work well on the tablet: flowing content and pictures together onto a small screen can’t accommodate both types of media well.   But the Economist has now arrived on Android and it really works well.  I’ll pay for the tablet in six months of not having to buy backup print copies when I’m outside the Netherlands.

Pointers to anything interesting are welcome!

Disclaimer:  I pay for and use all apps and devices mentioned here: I have neither been asked nor paid to write any reviews.

Posted by Dave Hampton at 1:12 PM No comments: Links to this post

The two things I was never good at in school were Chemistry and Languages  (okay, and Handwriting in elementary school). ‘Ironic that these hold center stage now.

But I do know baseball.

Our chemists tracked the ‘covering the coating’ problem down to an unexpected diffusion of silicone from the catheters.  This suggested a half dozen approaches to removing the material prior to applying the coating, and they ran everything in parallel.

But, after two weeks, nothing seemed to work.

Their disappointment at the review call was really palpable: they sounded tired and discouraged, and didn’t immediately have an answer for what they might do next.  That sent shivers through the rest of the organization: I worry about a vicious spiral setting in where lack of confidence is more damaging than lack of progress.

The Seattle Mariners were in the American League playoffs against the Cleveland Indians in the Kingdome.  22-year old Rookie Bob Walcott started for the Mariners, who were desperately short of pitchers.  He immediately got into trouble, walking the first three batters and loading the bases.

Manager Lou Piniella headed to the mound after Wolcott threw his sixth successive ball.  They had a conversation, Piniella went back to the dugout, and Wolcott caught fire, retiring the side and eventually allowing only two runs in seven innings.  The Mariners went on to win 3-2.

I was there: I really wanted to know what  Piniella said that turned things around.

"I talked to him about hunting in Oregon," the manager related afterward. "I said, 'You can enjoy your winter in Medford'; he's from Medford. I said, 'Look, if it's 11-0, who cares. Just give us five or six innings. Have some fun and relax out here.' "

We had a good lunch, we talked about life, I let them tell their story.  We speculated more widely about what might be happening, and we brainstormed a few solutions.  My chemistry is at a metaphorical level, I’m afraid, but the purpose was to stimulate confidence and new approaches, not to suggest an answer.

At the end of the day it seemed to have restored their optimism an ideas: we all knew what we were doing next, how we were helping, and that we were backing their team.  I headed south with cautious optimism myself: hopefully to convey to the wider organization.

Okay, there was a jerk on the Doncaster – Stevenage train who had spread out across my reserved seat and table, who loudly declared that reserved seats were rubbish, and who forced me to squeeze in elsewhere in the train.  It was really irritating.

But I’m just not going to let the jerks ruin my day.

Especially when there’s a playoff at stake.

Posted by Dave Hampton at 8:01 PM No comments: Links to this post

There are an awful lot of guys here in pairs…

That’s just the British way, people going out with their ‘mates on  Saturday night.

I don’t know, they’re making a lot of eye contact…

It was, after all, Robyn Hitchcock.   A wonderful show for three hours good music, random wit, exciting guest backups, completely unique and unpredictable

Oh, and it was very gay.

Apparently Robyn led one of the 70’s bands in Cambridge back in the day, so the Junction show was a homecoming.  With his 60th birthday two days away, it also brought out a lot of fans and several aging backup instrumentalists.  Nick, wizened on banjo, Kim, long Riff Raff hair on guitar, Jenny, distinguished on cello, and a young backup singer who hadn’t performed with Robyn before and was lost among her elders.

And Robyn, whip thin white haired, starting stories that he forgot the ending to, losing track of his place in the program, tossing off one-liners and school-days memories, and hitting every note like a pro.

My father’s generation aged gracefully, growing into The Greatest Generation with stories of war and business.

This is how my peers will leave this world, still touring and strumming our instruments and never getting older.

Quote of the day: “Language fluency has replaced work visas as the main barrier to expatriate mobility”.  The Economist

Bad ideas of the day:  Why, when lowering taxes, imposing austerity, deregulating banks, or imposing censorship lead to bad results, the conclusion from politicians is always that we just haven’t done it enough?  The UK lost it’s AAA credit rating and an election, the Republicans drove over the sequestration cliff and lost the presidency, yet Osborne, Boenher, still maintain that things will start to improve if we just do more of the same, harder.

‘Conservatism in a nutshell.

Good pictures of the day: Signs of Florida, blog and Flickr.

Posted by Dave Hampton at 9:41 PM No comments: Links to this post