I got a note from a friend vacationing in Spain – her family has had two days of sunshine in a week.  Temperatures have only rarely hit double digits centigrade this May; the rain had been beating hard and grey on my windows all week.  I’ve nestled in with work and reading.

This morning, though, the world turned technicolor .

I pulled up from reading Gleick’s Genius (a biography of Richard Feynman where I sat entangled in the Principle of Least Action, something I never really understood as a Physics major in college) and engaged with the day.

It seemed like  good day for a decent breakfast so I whipped up a batch of pancakes.  It’s pretty basic: a cup of  flour, an egg, teaspoon baking powder,

pinch of sugar and salt, milk to the right consistency, mix in blueberries.  But when I spooned batter onto the griddle, they just wouldn’t rise.  I varied temperature and thickness a bit, ‘no joy.  Back to the Internet: right ingredients, but try less mixing, different rising agent, sifting ingredients.  Or maybe just self-rising flour.

A quick run to the stores where everyone was buying garden supplies.  Traffic was light, even in town: the rowers were on the Cam for early practice, and the greens were full of picnickers. 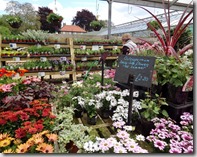 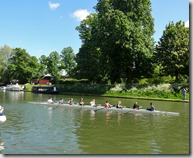 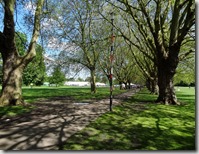 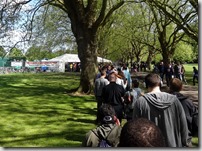 I joined the lines for the Cambridge Beer Festival.  This week-long event features over 100 craft beers from the region, 1.70 for a half pint of anything.  I got some Nethergate’s “Old Growler” and settled into the sun. 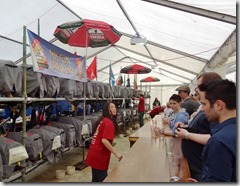 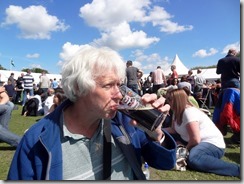 Posted by Dave Hampton at 11:37 PM No comments: Links to this post

What are the lessons…

My academic advisor asked if I would give a ten-minute summary on my experiences creating startups to a group of MBA students hoping to launch their own businesses.  “Most of them won’t want to go into tech or medical, unfortunately,” he confided.  “And they’ve already seen one too many grey-beards.”

I could adapt.  But the beard already went away years ago, just prior to my first job interview after Grad school.  And I went prematurely grey at 38, as my daughter was born. I could color, but my stylist assured me I’d wear birch-bark blond well, no sense in changing it now….

How many of you are sailors?

Those who’ve done it know that there are three key aspects to sailing: setting  course by the wind and waypoints, keeping a heading in changing conditions, and having log-standing crewmates that you like and trust.

And in remembering that when things do go wrong, and they will, that it can happen very quickly and very badly.

So when sailors come off the water to share a beer together, they tell stories of catastrophes experienced and averted, share advice and regrets.  And that’s my theme this evening as well.

Right: The planning was good: I understood my business and my market, had a good location and enough capital, knew the people and processes to build my product.

And the cash flow went as planned.  I had enough short-term work at a good remuneration, to keep me in contact with peers, to build a presence, and to pay the bills.

Wrong: I was unprepared for the time consuming and expensive process of creating a business as an expatriate, of setting up home and office in  foreign country.  I f anything, that has gotten harder.  Immigration is complex, expensive, time consuming, unforgiving.

And I held out for the right partnership deal: the negotiations took longer than expected, interest waned, and the partnership foundered.  Time kills deals: stay urgent and press forward.

-- CamStent:  A British company commercializing a non-stick polymer as an antimicrobial coating for urinary catheters.

Right: I brought  on a talented financial person from the start who could keep the books pay the taxes, manage the budget, and give us credibility with investors.  We learned to fundraise well, and were able to take in cash in excess o what we needed.

This became important when we hit an unexpected squall last fall and had to do extra work and delay a planned fundraising.  We only solved the problem last week, by which time we were very close to the shore.  Without that margin, we could have lost the company.  As William Sahlman advises, “More cash is better than less cash; Cash sooner is better than cash later; Less-risky cash is better than more-risky cash; NEVER run out of cash.”

Wrong: While I managed subcontractors and employees well during the crisis, keeping prioritized, confident, and on-task, I did poorly with the Board and Shareholders.  I was honest and transparent, but I got the balance wrong between too little information and too much information.  It led to unnecessary worry and a heightened perception of risks.  They inserted themselves into the process, limiting choices and increasing reporting.  I should have told them more, more often, using better pictures to show issues and progress.

And I should have found a better way to cut off the Chairman’s stipend than simply terminating it.  Never mess with another man’s livelihood.

-- T4Analytics:  A US-based company that is creating a monitor to continuously assess the level of neuromuscular blockade in surgical patients.

Right:  The clinical people on the team were outstanding, with strong connections to our customers and professional groups.  The prototype went viral at its first public demonstration,  and we had a manufacturer and distributor before the design was done.

We pressed as hard as we could on the design work to get a working prototype within four months of concept agreement, generating early data, experience, and relationships that sustained and motivated subsequent work.

Wrong:  Our early funds cam through relationships, trust funds and close professional associates of a founding member.  It was easy money.  But, the use of funds and ownership of shares becomes personal; the management becomes custodial and increasingly focused on managing risks and investment returns.  Never take family money.

We gave away too much control in operating agreement and found ourselves unable to steer the ship when the inevitable reorganizations around new capital became necessary.  Safety triggers failed to operate (a quirk in the numbering of the clauses meant we had to prove a member was insane before they could be bought out), and individuals were able to stonewall group decisions requiring unanimity.  Write down term clearly, establishing a clear balance between the rights of Capital and Labor, and pay for good, objective reviews.

In the end, like sailing, I love taking startups out and have great fun working in them.  Unlike Corporate, they allow me to do the projects I want, work with people I enjoy, and keep what I win.

But, like good sailing, it’s also demanding, so keep the ABC’s in mind.  Know your Ambition, your Waypoints, the personal and business reasons underlying your startup.  Keep your Balance, your heading, by having flexibility in your business and personal time for yourself.  And don’t ignore your Connections, the Crew, the people you know and trust and who keep you in touch with what’s real and what matters.

An never forget that you are doing, and building, something Remarkable, something that few others will ever try or know.

Posted by Dave Hampton at 2:04 PM No comments: Links to this post

The first précis for the new Stone Bridge Biomedical site came in last week,  a summary of the discussions I’ve been having with my brand consultant.  It was right, but wrong, complete, but with gaps.  There was a problem, but as I fiddled with the outlines,  understood it’s a problem with how I express my business, how I frame the story.

Think about how people introduce themselves:

They talk about their resume, not themselves: I, I, I.

In social settings, if asked, I try to start with a light story about what I’m doing that illustrates who I am rather than lit qualifications.   I’ll keep it relevant and brief, ask a question or two, and look for a shared basis for connection and conversation

But the top-line definition of my business was coming across like a resume:

Narrative doesn’t tell the story, and it was leading to a web site of snapshots, not exposition or connection.

To make a human connection, I needed Stone Bridge to have definition and motivation, not a qualities and waypoints.

I fiddled with ideas from shallow (“What do you do better than anyone else; why would you be the first person a customer would call?”) to deep (Compelling unmet need, large market; Sustainable differentiated positioning; Scalable business model; Why us; Why now).  I thought about what I offer my customers, how I look to them, what I do well, what they want most.

Working together with the branding mentor, it came down to this:

With this brand-in-hand, I think that we can go on towards the important communication elements: An “at a glance” depiction of the company’s focus and business model;  presentation of our unique offering; description of our products in context of our  services; validation that we succeed at what we do.

Posted by Dave Hampton at 12:44 PM No comments: Links to this post