The best news this week is a report that the FAA is going to loosen its ban on use of electronic devices during take-off and landing.  I  first read it in my favorite Dutch daily, Metro, and the decision could come as early as New Year’s.  Radiating devices like MP3 players, digital cameras, and eBook tablets were likely never a threat.  Broadcasting devices GSM or WiFi are a more likely culprit, but authorities were making no distinctions.

It’s always been hard for me to rationalize, especially when the bans were applied selectively by cabin (I was seldom challenged in Business class) and airline (RyanAir applied the rules with relish).

I do a lot of work in coffee shops, and research suggests that for creative work, the background hum of conversation can be a stimulus. Coffitivity brings the coffeeshop ambience to your workdesk for those times when you need the social fix (and it doesn’t prevent your concentration).

It’s a cute idea: I find I prefer it to white noise, nature sounds, and new-age music.  I wonder how it would work in place of wind chimes in spas?

I want to backup my Window Live emails, and considered simply forwarding them to a parallel GMail account.  I discovered two significant differences: Folders are replaced by Tags, and Deletion is replaced by Archiving.  I didn’t find either change easy to work with.

It seems easier to open a dedicated file space for messages about business or family, instead of applying filters.  A recent study also concludes that folders provide an effective way to manage workflow and inbox clutter.

And there’s something creepy about never being able to delete an email  – ‘but that might just be me.   Post-PRISM.

I ran into a minor problem with RSS Graffiti, which posts RSS feeds to Facebook pages, likely just a configuration or server issue.  however, the vendor uses a “Community-powered support” site, Get Satisfaction. that’s a nightmare of registrations, emails, and spam.   The site is full of public complaints, unanswered.

For $5 per month, RSSGraffiti offers the option to avoid the forum to exchange emails.  Awful: I have uninstalled the app.  This is a poster child for bad customer support.

In contrast, the Financial Times rolled out a buggy update last weekend.  I sent feedback, and got a an email asking for follow-up information the next day, and a phone call with a fix an hour later.

Excellent customer support is possible and some companies do it.

Finally, I am playing with a beta of another service called IFTTT, an acronym for ”IF,  This Then That”. It works with a lot of social and information media services to pipe data according to a rule. Think ‘trigger and result’: “If the chance of rain is >80%, send me an SMS”.

It takes a bit of time to configure services and test rules, but it looks like a promising idea, continually improving.

Usual disclaimer: These are experiences and products that I use; nobody has asked or incented me to write these comments.

Posted by Dave Hampton at 12:42 PM No comments: Links to this post

In 2006, I moved to Arnhem to take a general management role in the Medtronic subsidiary outside of town.  It was a two-year posting, full expat package: unthinkable these days.  I moved into a flat on Burgemeester Weertsstraat, just across from Sonsbeek Park.  I pulled out in 2008, reluctantly moving to Maastricht after the mothership decided to close the division.

There was never much reason to go back for a visit, so it’s bee fie years.  But yesterday, in Nijmegen with  couple of spare hours, I took the train up for a look.

First impression is of change: the new train station is I place.  It was an artist’s conception with gritty construction everywhere when I left, now it’s gleaming new, airily modern in the Luik-style. 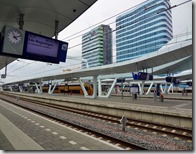 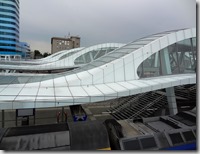 Beyond that, little has changed, though.  The neighborhood is still red brick, the houses trimmed with a whimsy seldom seen in Limburg, the gardens everywhere overgrown with flowers and trees.  The local AH, the  Banketbakkerij Jansen De Koning, the florist are still there; my apartment looks well maintained and familiar.  I took a few photos as it started to rain. 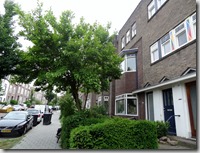 Across the Park toward town: the ducks, swans, waterworks , museum are all still there.  I found that I was enjoying the fields more than I remembered, all the shops were closed o Sunday and a stroll seemed like a forced alternative.   I arrived at the crosswalk that used to be so confusing,  a maze of colored paths, indicators, and zebra stripes.  Now it makes perfect sense and I waited for my green.

The town was more familiar than it was when I left five years ago.  The architecture was exotic back then, the words and signage unfamiliar.  I watched the cars zipping around the ring road and into the tunnel.  That was how I traversed Arnhem each day, taking the bike to work or the train to Schiphol was an adventure.  I wonder I the car cut me off from the city, from walking it and understanding it as I would today. 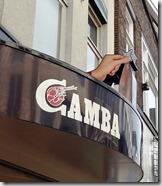 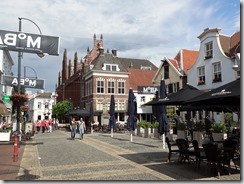 The St. Eusebius Church is being renovated: the MoBA exhibition of Fetish Fashion is irreverently inside.  20 euro to enter, no way.  The shop windows along Ketelstraat have examples enough, all representing women as objects to be bought or eaten.  Calvinism may finally be dead in Arnhem. 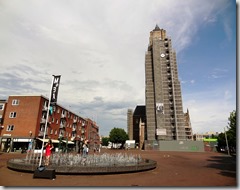 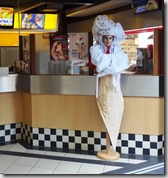 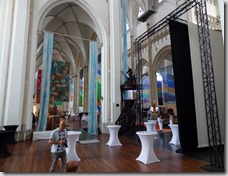 My daughter’s favorite store window, with legs blocking the sidewalk, is still there, so is my favorite sculpture outside he Dudok coffee shop. 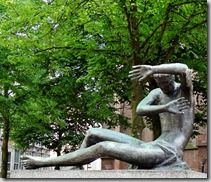 The streets are a bit dirtier than I remember, the contrasting old and modern architecture more jarring.  It seems smaller than I remember it being.  It’s familiar, nostalgic, but not as compelling as Maastricht.

I stop at Koepelkerk and order a snack (in Dutch), take a phone call (in English).   The sun made the trees and buildings glow as the bikes clattered past.  I remember when this seemed the height of European living, when I thought I had expat living down cold.

Posted by Dave Hampton at 8:44 PM No comments: Links to this post

I’m in Nijmegen today for Jules wedding, invited as a witness for their ceremony.  It was my first Dutch bruiloftsfeest and it was really wonderful.

The ceremony was simple and very personal, focused on the couple and their family.  A webcam (may have) connected the event with friends and family across the globe, one of the little ways that the Internet helps to bring everyone together at important moments.

Most of the ceremony was in Dutch, led by the Gemeente Ambtenaar in her official red toga.  Her speech, a narrative abut the couple and introductions of the wedding party, was totally clear to me for being in Dutch: I’m trying to figure out if it was her accent or her gestures.

‘Fortunate in any case, as she did my introduction in Dutch as well.

The reception was also fun; I visited with a half dozen people and found the groom’s mother to be especially charming.   Part of it was that she was so typically Dutch in manner and outlook, but part was just sharing experiences with someone (else) who had lived long and seen a lot.

Posted by Dave Hampton at 9:30 PM No comments: Links to this post

Across the pond and back

We’re in the midst of fundraising for the surgical product, and finally connected with a good offer.  $5 million, tranched in on milestones, share upside for hitting them, 40% equity out.  That’s lowers the valuation and raises a CEO issue, but it’s a credible start

The only catch was that they wanted face to face contact in three days.  In Miami.

‘not much to do but to saddle up and ride out.

East Coast storms delayed my arrival until midnight on Thursday; but the jet lag assured that I was up early for our 7am meetings.  Our group did a pre-coordination of their questions and our positions over breakfast, then we went into group discussions with them at 9.

Rapid-fire questions flew past for the next 15 (!) hours, with only an hour’s break just ahead of dinner.

I will credit them with asking good questions, listening, and following up well.  While they were bulldogs on some issues (“How many sample would the Chinese need to analyze to crack the encryption scheme?”  65,000, actually), they took advice on others.

Dinner, at Morton’s Steak House, was delightful: people with money spend it on excellent food and wine.  Conversation veered from the moneyed-conventional (travel and lifestyle tips) to conservative-surreal (Can we eliminate the lower class by sterilizing them?), probably typical for the 1%.  I stuck with my liberal positions while silently renewing vows to get the Dutch tests done for permanent residency.

Early the next morning, they were off on their NetJet and I was buying a train ticket to see Miami ahead of my flight back to the Continent.  Miami has an extensive train system so getting into the city was easy, although the trains literally run once every half-hour.  I went one stop too far and had to back track: it took 60 minutes to make the reverse and onward connections.

Fortunately it was a warm day, not too humid.  The skyscrapers glowed blue, the sunlight danced on the water, urbanites lounged in the parks on Adirondack chairs.  I tried flecks of Cuban cuisine and mailed my son’s birthday gift. 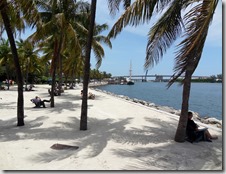 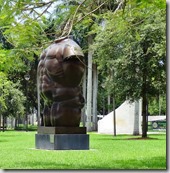 ‘Back at the airport, I discovered tat I had accidently booked my flight back to Paris for the following weekend rather than today: $150 solved it.  The food didn’t set well flying back; the border security lines were long at CDG against the 1-hour transfer interval to my Amsterdam flight.  I back in Maastricht by midafternoon, worn through.

Posted by Dave Hampton at 10:49 AM No comments: Links to this post