Wrapping things up in Barrington

Everything is just about packed and out now.  The truck came yesterday morning to pick up the larger pieces; I took a carload of smaller things to work for temporary storage before redistributing them in a few days.

Frustratingly, I had some vandalism in the back yard while I was at work yesterday.  Nothing major and the house wasn’t broken into, but it may have been a reaction to the truck’s departure.

I talked with my landlord and there isn’t much to do: the neighbors are not apologizing and still have keys that they took.  She suggests that I just pack and go, likely a day earlier than I’d hoped.

I just want to leave without incident, but it’s becoming harder.

A friend and I were reflecting over a beer about how we choose a place to live.  It’s aspirational: we want a better life, proximity to family, friends, and opportunities, someplace that we think we’ll fit into and build a new life.

There’s always a leap of faith in moving someplace unfamiliar.  I trust that the house is sound, the setting peaceful, the neighbors  congenial with values and outlooks that I share.  And the first year is a test, reaching out, making social connections, finding friends, exchanging favors.  Eventually, I do feel like  part of the community, recognizing folks and joining events.  And most everyone was very welcoming and inclusive.

Village life had a lot to offer, and I’m happy to have had the experience.  Most people had deep roots and a lot of pride in the homes and relationships along the Green.  I’ll miss the sports matches, the social gatherings, the lazy twilights talking and laughing over a good meal or a drink in the yard.

I’d hoped for more of the Cambridge experience in living here, but 10 km is a surprisingly big distance.  I can chase up people and academic lectures, join Formal Halls and festivals, attend  theater performances, Chase evenings, and Chemistry Department Christmas tastings (all wonderful). But I’ve learned that I’m not  really a part of the University unless I’m in the University.

Still, I leave with good memories of the years spent here.

So, I made a celebratory dinner and toasted the life I’m leaving tomorrow.

Then, onward as ever with the 13 boxes that make up an expat’s ‘home’ and and optimism for the future.

The London attorney sighed, slowly rotating the thick stack of papers a quarter-turn at a time, tapping the edges on the table to align them, then repeating.

In the United States, *tap*, a Notary would just sign and stamp the signature page. *tap* But that simply isn’t how things are done here in England *tap*.  Perhaps you could come back tomorrow when you’re more ready?

I took the proffered business card and smiled before departing.  ‘just another day in Paradise….

We are filing legal documents in the United States, requiring a notarized signatures on each signature page.   I’ve been through US (an embossed stamp: easy) and Dutch (tricolor yarn and wax: formal) procedures, but this was the first run at the UK. I took the advice given and printed a full set of finalized documents before contacting a local Notary Public in Cambridge..  This time, much smoother.

So, while the process is a bit complicated, it’s workable with preparation and patience:

In the US, only a signature page is required.  Here, the primary and supporting documents must all be printed (100 pages in my case) and a second copy printed for the Notary.

Bring a passport, driver’s license, and visa card for proof off identity.   For proof of residency, I needed to additionally provide a utility or phone bill, something with my name and address on it, for the Register.

The documents are examined and checked to make sure that everything is present.  Holes are punched and a ribbon is threaded through the spines to bind the documents. There was choice of colour, I picked Royal Blue.

There was a formal signing, and then an oath for the affidavit.  I was handed a bible for my right hand, instructed to point at my signature with my left, and solemnly swear before Almighty God that I was indeed, David Hampton, that everything in the documents was true, and that the signature affixed to the document was well and truly mine.

The Notary then signs everything in flowery cursive with a fountain pen, blots the excess ink, and affixes a seal to the two loose ends of the ribbon (Wax is so messy, he commented, applying a press-on seal).

A supplemental document is reviewed and signed stating that I was not given legal advice or translation services, and a number to call if I had any complaints.  I accepted the terms and shook hands.

And off I went to scan, send, and join the submission.  Everything will go in on Tuesday.

Posted by Dave Hampton at 9:21 PM No comments: 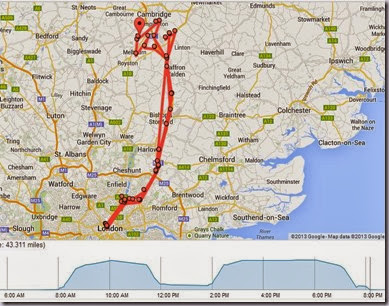 It’s been a week for backsliding.

It wasn’t planned that way, it was just that commitments made months ago all seemed to come due at once.

A pitch in Leeds on Tuesday. Hosting a conference in London on Wednesday.  And back and forth appearances in London and Cambridge on Thursday.  And Google tracked it all (top, today)

Leeds was for YABA, the Yorkshire Association of Business Angels.  They were early supporters of the business and I have always enjoyed presenting our progress to them.  They take a more intuitive approach, inclined to look you in the eye and ask the key question, then make the deal with a handshake. 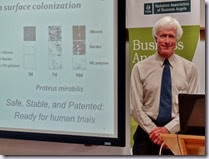 This was a 15-minute pitch, so a chance to take the slides a bit more slowly and interact more with the audience.  It was relaxed and comfortable, a few chemists in the group who asked excellent questions.  The lunch and the mixer afterwards was productive.

The conference was MedTech Investing Europe 2013 at the Kings Fund in London.  I was asked to chair the meeting, which involved a keynote on the “State of the Nation” in medical technology, and a couple of follow-up summaries.   The meeting is a nice mix of investors, small businesses, and service providers.  Panel discussions on topics ranging from Digital Health to Global Development Processes.

I got into a bit of a scrape over digital health.  I am not a believer in Lifestyle Apps, AI, or Big Data, but there were panelists who’s reputations were tied to those technologies.  Another good discussion centered around the relative value off incubators vs. mentors: the older, wiser heads unanimously favored the latter.

Finally, the Babraham Investment Forum, a Cambridge event that attracts a very scientifically literate and business savvy crowd. It’s a bigger crowd, several hundred, and tougher rules: 10 mins (wrap up), 11 mins (final warning), 12 mins (no new slide), 13 mins (the  hook).  I was also selected for special filming for a documentary on the event, so a mike and a shoulder-held camera ranging around me.

This was more of a challenge, I lost track of the moderator and of the time.  The room was dark, making it hard to connect with faces.  So I fell into the deadly trap of thinking about the audience rather than talking to them, then worrying about losing my place in the pitch and stumbling.  The voice goes up, the words rush, and I finished in 8 mins 30.

‘not my best day.

‘serious backslide that it was.  I feel like I need to regroup and get back on the program, life in better balance and less hurried.

Posted by Dave Hampton at 11:54 AM No comments:

I travel: I read, catch up on mail, stash a few links into Pocket.  The ferry back from Calais was uneventful, a smooth crossing with time to stretch out and do a bit of reading.  Among the better things to cross my tablet: 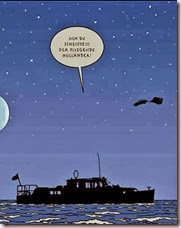 If you drive the Dutch roads, you appreciate this.  The ships captain observes the “Flying Dutchman” passing overhead in the shape of a caravan.

And, Anouk, just because… 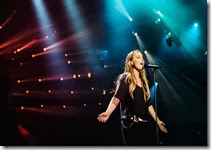 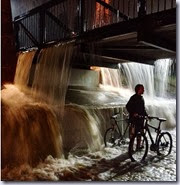 My parents and my son have been suffering through the terrible ‘500 year flood’ that swept through Boulder Colorado last week.  The University closed, the rivers rose, and this amazing picture was taken in the center of town.

It’s the way problems rain on my head this year.

And there was this set of instructions for getting  coffee at the train station.  I asked permission to take the picture and the barrista hid behind the counter…

Intriguing “Dr. Phil”  personality test: I got a 35.  You are sensible, cautious, careful and practical. People see you as clever, gifted, talented, but modest…loyal to friends…long time to get over broken trust.

Or, as one of my investors said: Dave is clearly focused and smart.  Smiley too, which always helps.

‘back in the UK: the ferry was filled with schoolchildren and the roads with caravans.  And then there was the unpacking of the “Brit-boxes”…it’s going to be a busy (last) week in Barrington. 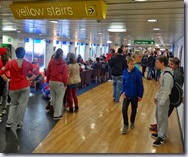 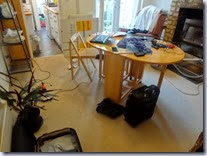 Posted by Dave Hampton at 10:37 PM No comments:

De herfst arrived in Maastricht this weekend with alternating days of warm sun and rainly cold.  It was a good weekend, overall, catching up with the accounts, the apartment, and the move.

Delightfully, I joined the celebration of Molly’s

60th, we sang ‘Happy Birthday’ in as many languages as we could think of, fitting for a big expat crowd enjoying wine and conversation.  I debated the Mind body problem, the Dream, and the Peaceful Life with Gee, recently retired from the Nuclear Medicine department.

And I wondered whether Choice Theory means that if someone arrives at their wrong answer, one that nonetheless pleases them, then is it also a good answer?

But mostly I took quiet time, lost along public walks in private thoughts.

‘Somewhat as a blowy Sunday should be.

Posted by Dave Hampton at 8:17 PM No comments: