Yesterday, a friend told me that another friend of ours was being unkind to a third, mutual friend on Facebook.  I went online,but couldn’t see anything amiss.

You don’t have a problem with she wrote?  Umm, no.

She read me a little.  You think that’s okay?  That’s not what I’m reading, though…   and it dawned on me that I was seeing a sanitized version of her timeline, not complete.  The settings had been tweaked and personalized.

I sighed and quietly removed her as a friend.  Trust matters.

Facebook wasn’t always like this.  When I first joined, it was a bulletin board system that classmates used to arrange parties and share photos. Then a wave of high school and college friends appeared, and it was a big reunion catching up with how everyone’s family and careers had evolved.  Finally, as an expat, it morphed again into a way to share bits of life with family and friends.

Increasingly, though, it feels like there’s more posing and spite. People propagate versions of their lives that are, at best, aspirational distortions, disconnected from meaningful or important events and people.  They inflict petty slights on one another, severing friendships, adjusting privacy, and setting barbs to when angered or hurt.

It’s not surprising that surveys are showing that heavy Facebook use undermines happiness.  And this is apart from the mis-targeted ads for mobility assistance and Dutch girls that incongruously clutter my timelines.  I’m not quite to the point of pulling out, but I’m definitely using it less and being a bit more particular about who I share company with.

Posted by Dave Hampton at 9:17 PM No comments: Links to this post 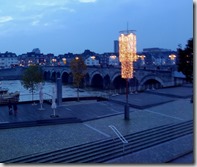 Walks together bring couples together, says an article I was reading the other night.  My grandparents, good German stock, would stroll the perimeter of their yard each evening; a lot of British couples regularly take walks on weekends and holidays.  I’d 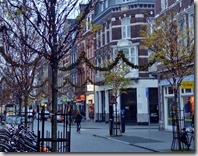 fallen out of the habit, time and circumstances conspiring against it, but as part of keeping work tucked into a fixed interval of the day I’ve taken it up again.

I’ve tended towards an evening stroll through the cobbled streets in Maastricht, or a morning wandelen along the ocean in Poole, but 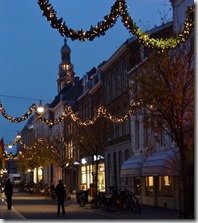 I’m enjoying the quiet time to think and to escape the computer and the phone for a bit.

This evening, preparations for the Christmas Markets are descending on the city.   The skywheel is already up in the Vrijthof Square, and workmen were assembling the tree.  The restaurants were 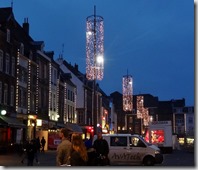 decked with colour, garland draped across each street, and icicle lights swayed over the squares.

There aren’t many people about, likely the cold and economy keeping most people indoors on a Friday evening.. 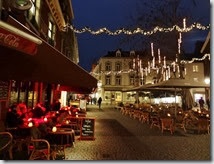 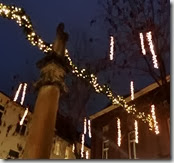 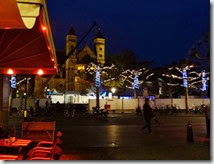 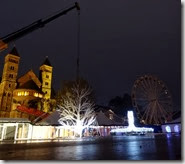 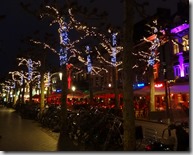 I shopped for traditional chocolate letters and marzipan pastry to take back to friends in England. The news from Cambridge and Delaware as been cautiously improving all week, I picked up my 5-year visa today, and we’re incorporating a new company 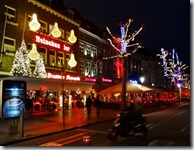 next week.  All in all, I’m feeling fairly optimistic about the next month.

Reflections on the week, under the lights, on a closing walk:  A full life, successful future, and secure relationship aren’t too much to ask for, beyond?

Posted by Dave Hampton at 8:15 PM No comments: Links to this post

Thanksgiving dominates cooking plans for the month, and I’m no exception.  There will be a 22-person party in Sandbanks for the occasion and I’m in charge of stuffing the turkey and assembling the cheese board.  An early trial of echte Limburger kaas got a big thumbs up, but it was subsequently banned after the smell permeated every corner of the herenhuis.

I’m hoping that my Opa’s recipe will be a winner.  It hasn’t set well inside the bird since he passed away, but proximity to his homeland should bring better luck next week.

…and The New York Times has a fun article about expat thanksgivings in Paris.

RECIPE 1: ‘continuing the theme of hearty soups and light desserts as the weather gets colder (only 1 degree C along the ‘skade this morning).  I had a run at Lemony Carrot and Cauliflower soup last week, a thick mixture of vegetables with minimal water.  Miso paste wasn’t easy to find (and needs a lighter touch than the recipe suggests), but that was balanced by the fun:  frustrated souls benefit from a half hour hacking root vegetables.  In the end, it was a good result but slightly underseasoned. Adding a few herbs didn’t help, and a chilli simply over-livened the puree.  Still, it kept well, tasty served warm or cold, for the next few days.

I have been fiddling with variations on my favourite tomato soup recipe as well.  ‘Adding creme fraiche is good; substituting leeks for onion is not (too many fibrous bits).

And plums make a killer coulis.  Better yet, it’s only two ingredients away from a decent plum sauce for the duck.

INTERLUDE:  The FT went on a rant about the epidemic of people taking pictures of their food in restaurants.  I wasn’t impressed: What’s the harm if people want to remember an occasion or post a review? I do it myself, if only to compare what gnocchi should be as compared with my own failing efforts.

RECIPE 2:  Masterchef Pro is back on-air with an early challenge to make a coconut tuile in 12 minutes.  Like a fondant, it seems simple: mix egg white and sugar, then butter, flour, and vanilla.  Smear onto parchment paper and bake briefly. Voila: a thin wafer to garnish ice cream or accompany a coffee.

The reality is, surprisingly, also trivially simple.  The only tricks are not to whip air into the batter nor to make the wafers too thick.   A thin, even application works best, and a couple of practice tries to make sure that the edges don’t get overdone before the middles.  Mine needed half the cooking time and easily slid off the parchment paper, yielding an airy, sweet and slightly chewy macaroon.

The fun is that they are still malleable for about 20 seconds, so they can be shaped around glasses, twisted into corkscrews, pressed into cups, and folded into fans. 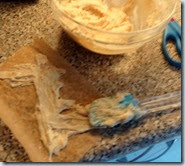 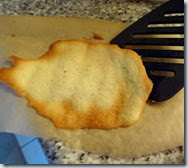 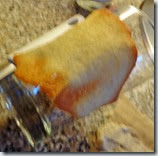 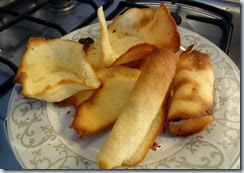 CODA:  The FT also took a swipe at televised cooking competitions which are redefining the national perception of food. Cooking shows emphasize on technique and presentation (good television) instead of ingredients and taste (difficult television).  They thus create an audience of spectators: people who know good play when they see it but who will never pick up a ball for themselves.

I absolutely agree that great cooking, like great art, should inspire and motivate participation.  There’s no way to better understand the chefs and artists than by giving their techniques a try, and I find that I get a lot more out of watching chefs work in restaurants as a result.

As well as a flash of confidence and pride when something turns out well from my own hands.

Posted by Dave Hampton at 7:38 PM No comments: Links to this post

I arrived back in Maastricht to find that the Christmas lights had been grown from the lamp-posts over the weekend.  Its a little scary – still 10 days until Thanksgiving and the pressure is already building.

The controversy about Zwarte Piet has intensified this year, following comments by a UN worker that the character is racist.  A Facebook page defending the character gathered nearly 1 million Likes in a few days, including (tijdelijk) mine after a Dutch friend pointed it out.  That elicited a

barrage of messages from friends requesting that I reconsider.  People’s perception is the meaning in this case, and so I pulled my less-than-well-considered endorsement.  The Times weighed in with a good summary today – I suspect that Piet’s days are numbered.

Delightfully, CNN has decided that my job, Biom3edical Engineer, is the Best Job in America.  They rate my quality of  life as “Personal satisfaction: A, Benefit to society: A, Flexibility: B, Low stress: A.”   2 of four accurate, anyway…its the expat-entrepreneurial kicker that makes the difference.

Elf-elf arrived last week – the traditional start of Carnivale on November 11.  I was too busy to participate, too busy even to notice the hoards of costumed youth streaming into the city centre.  I noticed the difference as I cycled to Dutch lessons, though, and joined a friend to go see the festivities in the Vrijhof Square at mid-afternoon.  Unfortunately I had given her a bottle of syrup, which the gate-checkers wanted to confiscate before she entered, and that was the end of the pre-party for us. Still, with temperatures dropping, it’s nice to know that the traditional feest is waiting.

‘only four months away.

Posted by Dave Hampton at 8:38 PM No comments: Links to this post 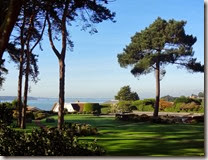 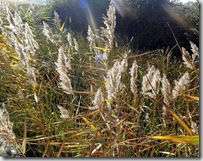 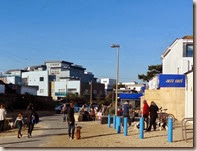 Posted by Dave Hampton at 9:24 AM No comments: Links to this post

The third day of the Sandbanks Birthday Bash, I woke to a 7 am alarm, too early for a Sunday morning after (many) consecutive late nights.  Ah, right: as the haze clears, I remembered the plan behind it all…walk the Durdle Door by early light.

I’d visited Lulworth Cove and the Durdle Door last month, two well-known landmarks along Dorset’s Jurassic Coast.  There hadn’t been time for a wander around them, though, and the rain had made all of the trails too slippery for my balance (confirmed by three slips down the muddy trail).  I’d planned to return on a drier day when the light was better, and, finally, this was the walking day. 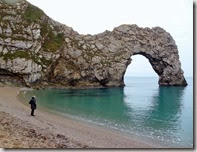 We were, indeed, ahead of the crowds.  The roads were empty,the villages silent.  We were first past the turnoff at West Lulworth and through the gateway mobile home park, first into the car park and walking out onto the point above the Door, first down to the stone and shell beach.  Low tide exposed a broad swath of coarse orange  beach beneath the chalk cliffs. The sea was blue-green flat beneath a sigh of wind,

quiet except for the waves tossing the pebbles.  The rock formations and cliffs can illuminate with the colours of sunrise, but today there was white mist and grey cloud and bluish-green shadowless air that coolly muted the shoreline.  It’s a wet pearl light familiar in watery impressionistic landscape paintings. 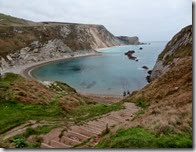 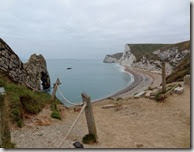 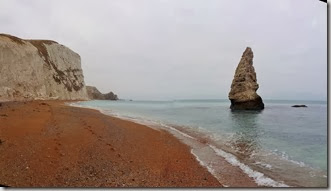 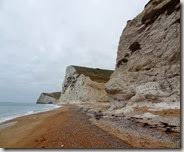 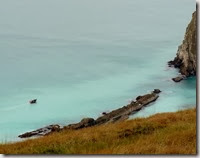 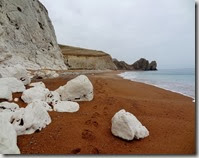 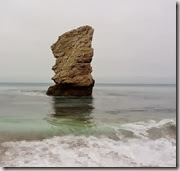 We hiked the beach as far as we could, then back up the cliffs and over to Lulworth for coffee and cakes.  That time of the morning, there were only joggers and outdoorsmen on the trails:  Boats and visitors didn’t turn up until noon. By that time, it was the home stretch for the Bash, so back for a quick change and an afternoon Sunday roast dinner and drinks, then coffee, then puppies…

…then, early, to bed, then pack-‘n-back to Maastricht in the morning.

Posted by Dave Hampton at 9:26 PM No comments: Links to this post