Out by the Dovecote

At first, I thought it was a grainery, round like a silo with a peaked roof.  It stood across from the herb gardens and fruit trees, the Priory and the Tithebarn, overgrown among brambles and bracken.

The interior was lined with hundreds of holes, small chambers, with a rotating ladder up the center providing access.  The signage identified the building as a dovecote, a breeding area for pigeons and doves used to provide eggs, meat, and guano in medieval times.  They were symbols of wealth and privilege, likely introduced by Romans but embraced by nobles and monks. 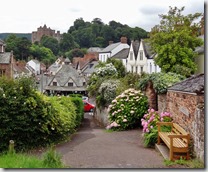 The whole arrangement was part of the afternoon spent exploring Dunster, a medieval village in the eastern portion of Exmoor Park.  The village has existed in some form for over 1000 years and maintains a lot of the original layout and thatch buildings.  A serrated castle looms over the town (balanced by a folly, a tower constructed just for decoration, on the opposite hill). 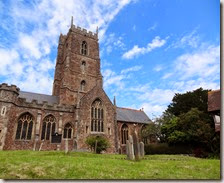 The Saxon / Norman church has a nice wooden barrel ceiling and a long history of difficulties between the monks and the parishioners, ending with the division of the church interior into separate seating areas.  More congenial settings lie outside: tea or Somerset ciders along the old high street, a stroll across the old river crossing, a sit in the yarn merchant’s pavilion.

It all makes for a nice couple o f hours of history and culture, perhaps with a hunger for trying a bit of dove squab before moving along.