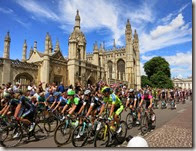 There were predictions of 100,000 people flooding into the center of Cambridge for the start of the worlds biggest bicycle race.  I’d oscillated between walking into town to find a spot along the road, or driving out to the countryside to watch from a village.

But, in the end, I opted for the in-town choice rather than the uncertain journey.

The race was at noon; scattered clumps of people were already walking past the college at 8:30.  I passed on breakfast, gathered my things, and started walking.  But by the time I hit the Fens, it was clear that few fools were out

this early to compete for the best seats.

The roads were blocked:   Workmen were still putting up barricades along the route, cones in neat rows, very polite police outnumbering spectators.

I wandered over to Parkers Piece, where the race was going to start.  The TakeOff Area was ready, the giant screen TV glowing with test patterns, the restaurants starting to cook.  The Official Race Gear stand was open, with prices ranging from Gulp to Wow!.  The VIP sponsor areas were ready; there were lots of people taking pictures through the security wires. 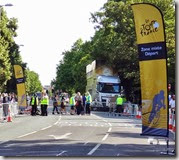 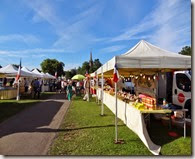 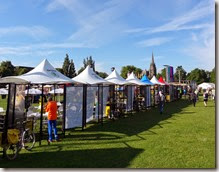 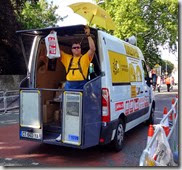 By 9:30, the first line of people had filled in along the start of the course.  I walked the route into town, faux-French signs everywhere.  It was time to claim a spot: I cut through the Market and around Great St. Mary’s Church.  And there, I parked: prime viewing, 9:30, with a coffee and a (large) bacon buddy.

It was a clear, cool morning, shadows creeping back across King’s Parade as the workers finished the racecourse. Vans selling official Race umbrellas and caps turned their loudspeakers to full volume, and the people purchased in £5 and £10 increments.

At 10:30, people started to fill in the gaps as the roads filled with the Sponsor’s Parade: cars decorated with corporate characters throwing gifts to the crowd.  I saved my applause for Carrefour and Nijntje-bunnies.

By 11, the crowd was swelling and having fun.  Every police motorcycle was greeted by a sea of outstretched hands and high-fives.  A gendarmarie zipped past in a tiny police car, followed by an over-the-hill troupe of cyclists in race-yellow.  Two NHS Ambulance bikes staged an impromptu race in front of Kings college.  A student climbed the wall at Senate House and took a selfie atop it: two more joined him.

A sleek car from a French magazine screeched to a halt and a newsman dressed as Sherlock Holms jumped out.  He scuttled back and forth, taking pictures of the wildly cheering crowd that was photographing him. 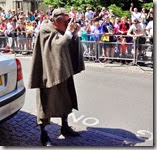 I wanted a cowbell.

The cue that the race had started would come as the the cheers filled Sidney Street behind me.  But the actual give-away was when the helicopters dropped low and TV crews pulled up on motorcycles.

The lead car rounded the turn from Trinity Street, the crowd roared, and the racers arrived.

Start of the Tour de France

It was worth every minute of the three hour wait.