I used to approach exploratory travel like Larry King approached celebrity interviews: untutored, with an open mind to whatever came along. It promoted unbiased discovery and intuitive comparisons.  I’d be inspired to do some reading about the background of what I had seen when I got home, then pick up more-depth on the next visit.

I’ve determined that I miss good things by that approach, so now

I spend a couple of days with Frommers or Lonely Planet, learning some history, street layout, and a few recommended sights, restaurants, and walks before landing.

At the same time, I limit formal visits to two per day, leaving time to wander the alleys and sit in the café’s, taking in the local ambience and following interesting trails.

So it was in marrakech, where and assortment of the best and the rest included:

El Badi Palace:  Built in the 10th century, only the coral walls and colored tiles remain, enclosing empty reflecting pools and laden orange trees.  Its gradually being restored (filling the pools with water would add a lot) but is nonetheless impressive.  The walls enclose a vast courtyard, with pocket halls for official audiences and events. 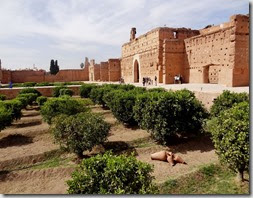 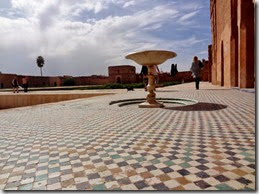 The two best parts, the view over the city roofs from the pisé ramparts, and the many storks that perch atop every wall, clacking to one another.  They are majestic.t when they glide across the orange groves. 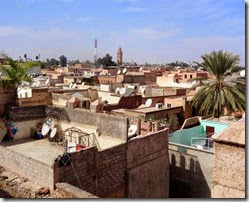 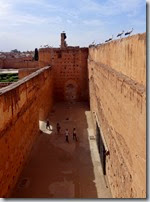 People-watching:  There is such variety in the everyday appearances and affairs of the residents 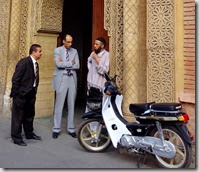 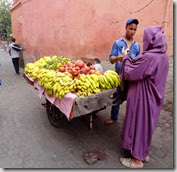 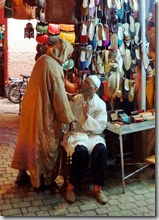 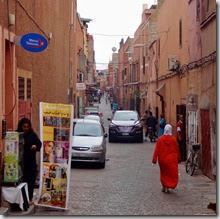 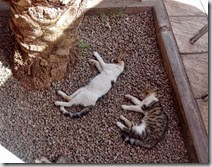 Bahia palace:  Built in the late 1800’s, this royal residence has more the feel of a home.  Rooms are arranged around courtyards and gardens, passages winding between the living areas and harems.  Unfurnished, the pleasure is in the plasterwork and the ceilings, the intricate paintings and tilework. 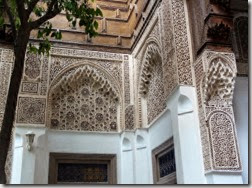 Jardin Majorelle:  Just outside of the city gates, this dry-climate garden has a Santa Fe ambience: very strong colors and deliberately spaced plantings.  It all works together nicely with the reflecting pools and red walkway. 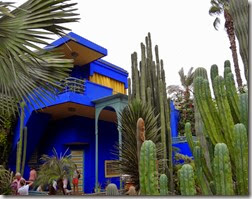 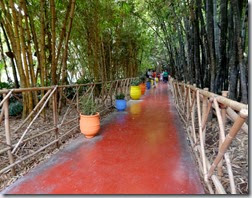 Musée de Marrakech:  Housed in the recently restored Mnebhi Palace, this collection is interesting, but lacks organization or narrative.  Pottery, metalwork, and embroidery fill the side galleries, but there’s little descriptive text or historical context.  How did so much mother-of-pearl get into crafts from an inland desert city?  (It lies along active trade routes) 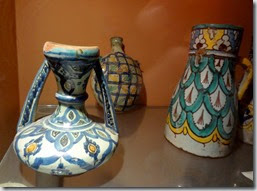 I did like the Berber saddle though, contemplating whether it’s design was utilitarian or ceremonial, and the calligrapher hidden back among the passages. 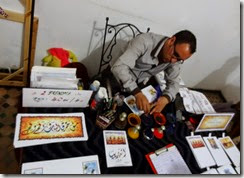 It’s an American thing to hit the highlights and then declare that I’ve done the city.

In this case, though, doing Marrakech is far from done.